A last-minute penalty from Bernard Foley saw the Waratahs win the 2014 Super Rugby title, prevailing 33-32 against the Crusaders on Saturday.

Foley was the hero for the Sydney side as his 45 metre strike - following Crusaders flanker Richie McCaw having been caught offside at ruck time - secured the 'Tahs a first competition triumph.

It was deserved as the regular-season winners held off a spirited Crusaders fightback in the second-half after leading handsomely early on.

Indeed the first-half was befitting of the occasion as the home side shot out of the blocks in the style they have been known for in 2014. It was clear they were not overawed by the occasion and also the opponents in front of them, who had twice beaten them in away Super Rugby Finals.

Foley was key to their gameplan as while the forwards laid the platform and Kurtley Beale offered so much with ball in hand, the number ten was cool in front of goal, slotting five penalty goals that helped send the 'Tahs into the dressing rooms 20-13 ahead of the New Zealanders.

His first three points came with three minutes on the clock when Crusaders openside flanker Matt Todd was offside. It was a prelude to something truly special in Sydney.

Michael Cheika gave the impression pre-game that he wanted his side to relax and play their usual game and an outstanding try from Adam Ashley-Cooper was evidence of just that. The centre had Beale to thank though as he set Foley on his way down the left wing before finding the number thirteen with recycled ball, who hit a wonderful angle to take the lead up to eight points with five minutes gone. This time Foley was unsuccessful off the tee.

Foley would find his range on eleven minutes after solid tackling from Jacques Potgieter led to Dominic Bird's spillage catching the Crusaders offside. And he was at it again four minutes later for 14-0 when Wycliff Palu's hit on McCaw led to Andy Ellis being offside.

The game was continuing in top gear at this point as the 'Tahs were going at almost a point a minute. But one would never write off the 'Saders and they duly came to the party when a counter attack saw Todd get over for 14-7 despite a last ditch effort from Ashley-Cooper.

Foley would respond soon with three following a ruck offence from Kieran Read and while Palu was off for a concussion test, Hooper was penalised for not entering through the gate so up stepped Slade to make it 17-10. Slade was kicking due to Carter having hobbled off.

Slade was outstanding from then on though as he took on the extra responsibility with both hands, knocking over a penalty on 36 minutes before Foley again stepped up for a 20-13 half-time scoreline. Those Waratahs points came due to prop Wyatt Crockett being offside. 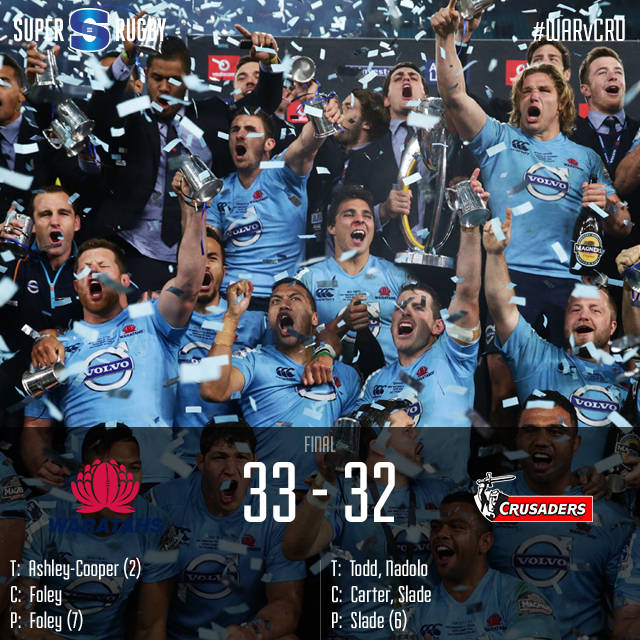