The Brumbies joined the Chiefs in securing their place in the 2014 Finals Series after they thumped the Force 47-25 in Canberra on Friday.

Seven tries were scored by the home side and fly-half Matt Toomua claimed three of those as the Brumbies look a threat going into the knockouts.

It was the Toomua show in the first half-hour as the Wallaby centre, playing fly-half for the Brumbies, got over twice as the Brumbies went 16-6 up.

His first came in the sixth minute after a nice passage from the home side put the Canberra side 5-0 to the good. It was a strong finish from Toomua.

That score fell in the middle of Nic White and Jayden Hayward missing respective penalty attempts but Brumbies centre Christian Lealiifano made no mistake on 15 minutes to make it 8-0 before Hayward found his range, firing over two three-pointers to cut the lead to just two points on 23 minutes.

Referee Steve Walsh penalised Force loosehead prop Pek Cowan soon after which gifted the Brumbies three points before Toomua went over for his brace. That second score was a case of sustained pressure leading to front-rows being out in the wide channels and the Wallaby spotted this and duly pounced.

At 16-6 the next points before the break would be critical and they ultimately went the way of the home side, who were purring in this regular-season finale. It arrived from a good Scott Sio carry which created front-foot ball for Toomua nd that led to Clyde Rathbone setting up Jesse Mogg for 21-6.

TABLE: And just like that, our Top 6 has been decided! (now for the small matter of finalising the order) #SuperRugby pic.twitter.com/aYEl1ZHK1A

More tries would follow after the resumption and it didn't take long for the Brumbies to put daylight between them and the Force, with Henry Speight showing real strength and speed down the right wing on 43 minutes. Lealiifano's conversion made it a 22-point advantage as the Perth side looked gone.

There was however hope 10 minutes later when a double boost for Michael Foley's side saw Brumbies flanker Jarrad Butler sent to the sin-bin straight after prop Cowan had powered over. Suddenly a fifteen-point margin with plenty of time remaining on the clock gave a feeling the Force had a lifeline.

It proved to be false hope though as with Toomua racing down the right thanks to excellent work against from Speight, it was now 35-18 with the kick.

Chris Tuatara-Morrison's well-taken score following a chip kick from Dane Haylett-Petty was soon matched by replacement Joe Tomane racing over after picking up a loose ball on halfway, with the game opening up as both teams chanced their arm in the dying embers. One sensed more tries were coming.

They certainly did as Force fly-half enjoyed an easy run in on the right wing on 72 minutes before fittingly the Brumbies had the final say, with ex Red and replacement forward Tom McVerry at the back of a driving maul to add the icing on the cake. 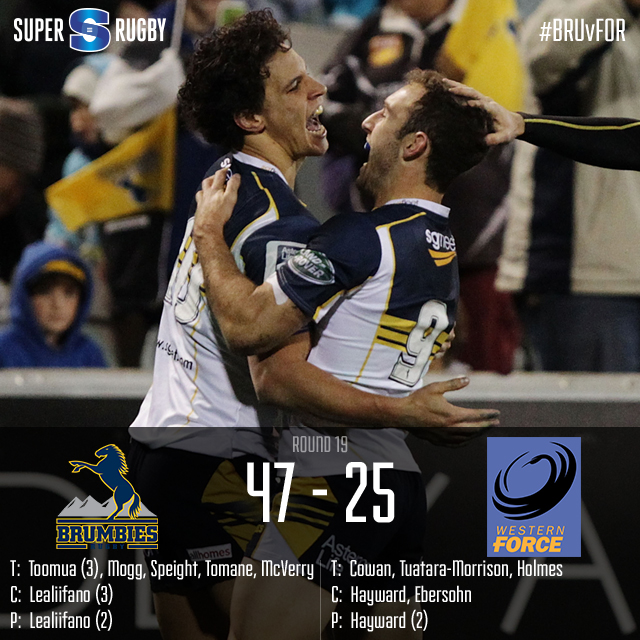