Scrum power and defiance eventually shone through for the Sharks as they squeezed past the Highlanders 31-27 at Growthpoint KINGS PARK.

Jamie Joseph's men produced an outstanding display of attacking rugby to hold off the power of the Sharks, but it was only momentary in a contest that ebbed and flowed in favour of each side on the east coast.

So many of the Highlanders group excelled. Jarrad Hoeata, Patrick Osborne and Malakai Fekitoa all stood out but ultimately their efforts were in vain.

The Sharks power game eventually made the difference, with Tonderai Chavhanga's breakaway try adding a rare touch of flair from the home side.

They ensured that there will be a South African representation in the Super Rugby semi-finals next weekend.

The Highlanders had won here before this season, the only side from overseas to do so, and when their tails were up they were hugely difficult to contain.

Jake White: "We played some of the best rugby we've played all season in the last 20 minutes." #SuperRugby pic.twitter.com/X6bN5etzrs

Sharks power against Highlanders flair always felt like a slight mismatch on paper. At half-time though with the New Zealand side ahead that prediction was being mocked.

Within the opening 15 minutes the home side had splintered their visitors with a phenomenal scrum and then marched over for the game's first try, from a rolling maul for Marcell Coetzee.

Up 10-0, the Sharks produced that strangling, Test-match style rugby promised by Jake White earlier in the week - but not without a small gamble from their skipper in kicking to the corner.

The Sharks persistence though to pin the Highlanders deep in their own half through the boot though was completely reminiscent of international rugby. Given the danger posed by the Highlanders back-line, it was both sensible and effective.

Double movement denied Jannie du Plessis of a rare try and Elliot Dixon came just short too, unable to gather Jarrad Hoeata's offload with the line at his mercy. Sopoaga's penalty in the 25th minute put the Highlanders on the board.

Jamie Joseph: "I'd say you were all surprised [that we came so close to winning]. It didn't surprise us." #SuperRugby pic.twitter.com/tVT0xEEExd

Steyn responded with another three-pointer but Malakai Fekitoa's seventh try of the season was the key score of the half, the timing of the pass spot on for the All Blacks centre to hit the line and have the speed and step to score.

It was a brilliant solo score, with Sopoaga's conversion bringing the score to 13-10.

Steyn's goal-kicking had been sound until his fourth strike, all from the right, came back off the posts four minutes before the break.

Thriving off turnover ball, the Highlanders always looked threatening on the break despite the efforts from the Sharks to pin them back.

The try to put them ahead was a work of utter class. Sparked from Ben Smith's tapped penalty, a string of perfect offloads from 15-1 with a chip over the top from Sopoaga in the middle ended with Kane Hames galloping over for one of the tries of the season. Beauty, for now, was overcoming the beast.

Would the Sharks stick to the script or adapt? Their reliance on the maul and scrum were was so clear when a blindside snipe from Cobus Reinach and Lwazi Mvovo broke down it came as no surprise.

The Highlanders hacked upfield and eventually won a penalty for Sopoaga to stretch the lead to seven points.

Perhaps inspired the Sharks opened up themselves, lacking the touches of accuracy but at least threatening through the likes of S'bura Sithole and JP Pietersen.

Their scrum remain unrelenting, pulverising the Highlanders off their own ball five metres out and with the ball loose Bismarck du Plessis was sharp enough to reach the ball first to score.

Unglamourous sure, but just as effective as the all-thrills action from the Highlanders. Steyn's conversion drew things level at 20-20.

Tonderai Chavhanga snuck up the blindside unable to be stopped as he hit the afterburners for a 12-point turnaround in a matter of minutes. There's no substitute for that kind of pace, but spare a thought for the replaced Mvovo who's been waiting for a pass like the one from Bismarck to Chavhanga all season to no avail.

There was still time for the extraordinary. Patrick Osborne was starting to simmer and after Reinach's clearance missed touch, the flying wing latched onto Ben Smith's inside ball and then produce a stunning offload out the back for Phil Burleigh to score try number six on the night. Sopoaga converted to swing the lead again at 25-27.

Pat Lambie's first appearance since March lifted a silenced crowd and although Jean Deysel was distraught when he knocked on short of the line, the positioning of another five-metre scrum gave the Sharks hope, even with Thomas du Toit and Jannie du Plessis off the field.

The outcome was familiar; great power giving Steyn a kickable penalty and putting the Sharks ahead by a single point with seven minutes to go.

The Highlanders just couldn't get the possession as the clock wound down to produce another score. The Sharks march onto Christchurch to face the Crusaders, having been hugely tested, Steyn's fourth penalty confirming their progress. 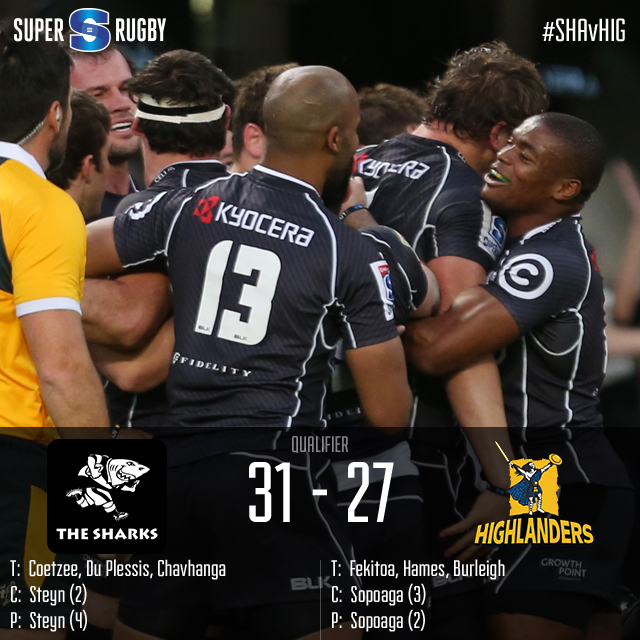