The Western Force finished on top in their Australian derby with the Reds in Perth, winning 26-19 despite Eto Nabuli scoring a hat-trick for the Reds.

The result is the Force's first triumph of the season after they lost their opening fixture against the Waratahs in Sydney last weekend, and their first win at home for 663 days, while the Reds also have a victory and a defeat under their belt after their win over the Sharks in their opener.

It was an evenly contested affair with both sides notching three tries apiece, but the Reds faded badly as the match progressed and conceded several penalties in the second half which cost them in the end.

Both sides showed a willingness to keep the ball alive throughout but committed several handling errors although the Force held a slight edge in the forward battle which paved the way to victory.

The home side made the brighter start and took the lead as early as the second minute when Chance Peni glided through a hole in the Reds' defence after running onto a pass from Jono Lance.

He still had work to do but shrugged off a challenge from Nabuli before diving over for the opening try.

Lance failed to convert and for the next 15 minutes there was little to report as both sides battled to gain the ascendancy.

The Reds took control of proceedings and in the 17th minute they launched a drive from a lineout inside the Force's 22. Nick Frisby made a break before offloading to Nabuli, who crossed for their opening try in the left-hand corner.

Three minutes later, Nabuli was at it again and after running onto a pass from Samu Kerevi on the edge of his 22, he stepped past Curtis Rona and Peni before outpacing the cover defence and went over under the posts for his second try.

The Force finished the half stronger though and were rewarded in the 34th minute when Matt Philip spotted a gap at a ruck close to the Reds' try-line and barged over for their second try.

Lance added the extras which meant the game was evenly posised with the sides level at 12-12 at the interval.

The Reds struck first after the restart when Nabuli sealed his hat-trick when he gathered a perfectly-weighted grubber kick from Duncan Paia’aua inside the Force's 22 before dotting down.

Quade Cooper added the extras but two Ian Prior penalties in the 54th and 66th minutes meant the visitors held a one-point lead as the game head towards a thrilling finish.

Shortly after Prior's second penalty, the Reds were dealt a blow when Sef Fa’agase was yellow carded for a dangerous tackle on Isi Naisarani. And things went from bad to worse for the visitors three minutes later when Curtis Rona crossed for the Force's third try after gathering a pass from Pek Cowan close to the Reds' try-line.

Five minutes later, Prior secured victory when he slotted his third penalty after the visitors were penalised for an indiscretion at a lineout. 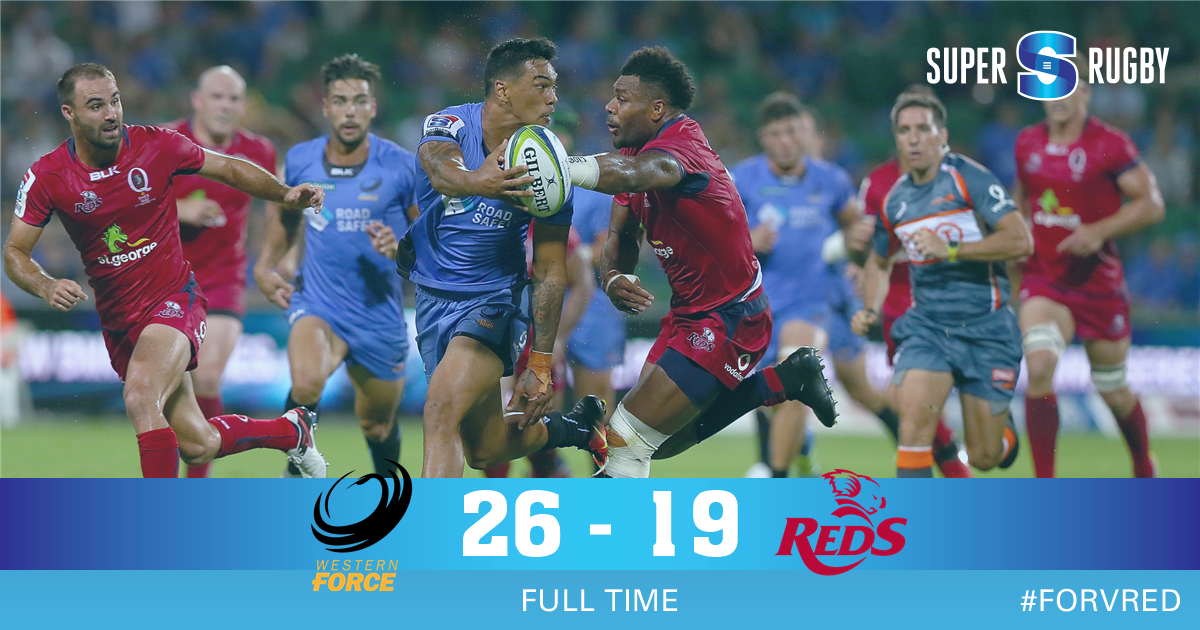