The Blues, reduced to 14-men just before half-time, could not stop a rampant Chiefs side scoring six tries to earn a 41-26 bonus point win.

Aaron Cruden led the Chiefs to a 41-26 bonus point win over the Blues after flanker Steven Luatua was red carded in Hamilton on Friday.

It was a competitive game throughout the first with the Blues and the Chiefs exchanging exciting runs. The Blues should have had a greater tally before the red card but fly-half Ihaia West failed to get the ball though the uprights on a number of occasions. The Chiefs had the advantage on the scoreboard after two tries from Liam Messam and Damian McKenzie in the first stanza but Luatua's 41-minute red card looked as though it had already sealed the victory.

The Chiefs now jump to top of the table with the bonus-point win, with the rest of the New Zealand conference still to play. The Blues are still tied for second with the Hurricanes in the same conference after their bonus point win last week.

Cruden had a near-perfect game as he kicked over 11 points to add to his side's tally while contributing three try assists in his side's six try romp of the 14-man Blues.

The Blues get on the scoreboard first when West nailed a penally after his side were awarded two penalties in a row and originally went for line but after a cross kick went awry they used their next opportunity to get the three points.

The home side replied quickly though as the Chiefs were given a penalty and kicked for touch. They used their line out drive well and rumbled over the line for Liam Messam to score. Cruden missed the extras, which proved costly moments later as West slotted another three-pointer and retook the lead making the score 6-5 to the Blues.

West kept the scoreboard ticking with another penalty from 40 metres out which looked uncharacteristic from a Blues that loves to the run the ball, but the decision worked for them as they extended their lead.

The Blues didn't get to hang onto their lead though as minutes later the Chiefs started an electric break from the halfway line, with Tim Nanai-Williams using his quick feet to dance around the opposition before giving it wide with the mercurial Damian McKenzie who scored in the corner. Cruden found some kicking form later in the half after adding another five points to his side through the conversion and a penalty.

West was given another opportunity to kick for goal in the 32nd minute but it hit the posts with the Chiefs kicking for touch and the Blues once again getting a penalty, the Chiefs' discipline proving to be a problem for the Hamilton men. Number eight Michael Leitch proving to be the culprit on two occasions after being caught not rolling away at the ruck, luckily for the Japanese international, West missed on both occasions.

The Chiefs almost scored a try before the halftime buzzer went when scrum-half Tawera Kerr-Barlow took the ball from the back of the ruck, took the ball right up the Blues line before throwing a sneaky dummy which opened up a the smallest of gaps which allowed the number nine to skip through and run 40 metres but unfortunately for the number nine knocked it on just before touching down.

It wasn't the relief the Blues were looking for as the TMO went back to check a late, high hit from Luatua on Cruden, which the TMO deemed was a red card offence and the former All Black was sent off for the rest of the match. Moments later the Chiefs used the lack of men on the field to start a maul from the line out and hooker Hika Elliot scored his side's third try off the back of it. His try, coupled with Cruden's conversion took the Chiefs to a 22-9 lead at half time.

The Chiefs scored minutes into the second half after they used their one-man advantage ruthlessly as they bossed their opponents, who came out of the change rooms looking shell shocked. Anton Lienert-Brown almost scored, it was called back for a forward pass but the Chiefs were given another opportunity when they used their advantage in a maul for Lachlan Boshier to drive over. The Chiefs were well into bonus-point territory now. 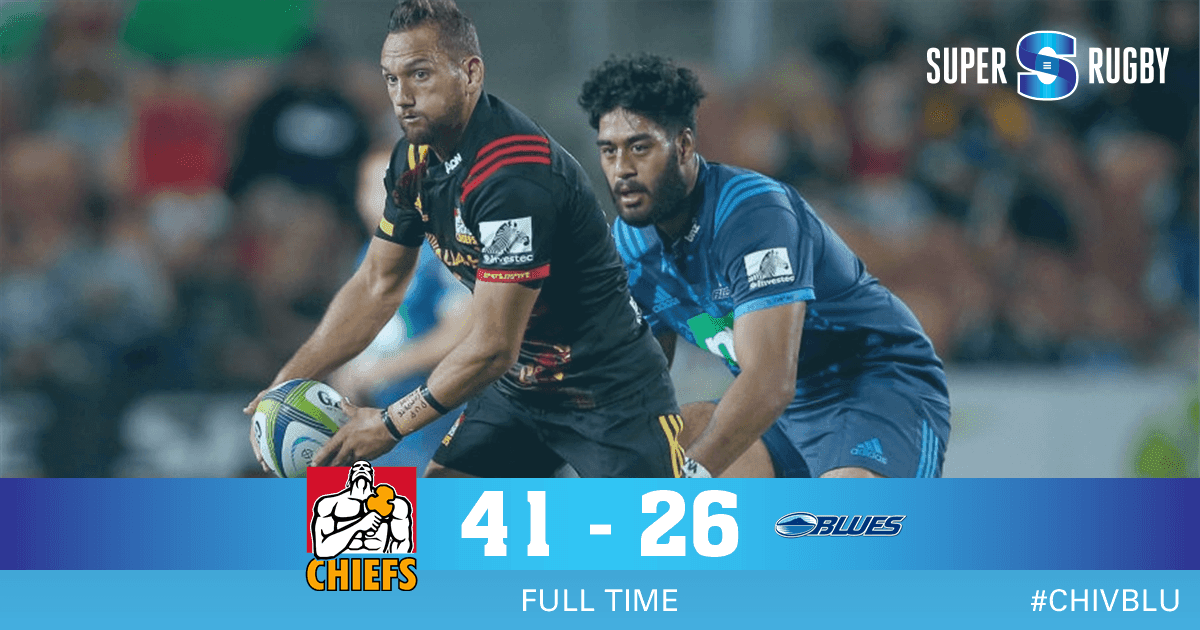 James Lowe then added to the Blues' woes when they used a 22 metre line out and spread it wide, Johnny Faauli popped it to Cruden who saw the pressure was coming quickly and slapped it inside to Lowe who ran the try in to make the score 36-9 after the conversion at 50 minutes.

Cruden kick-started another a try this time through Lienert-Brown after the Chiefs ran the Blues ragged through some forward dominance before swinging the ball wide to Cruden who sucked in the defence and gave it short to the outside centre to score.

The Blues never know when they're beaten though as replacement lock Patrick Tuipulotu barged over the whitewash for his side's first try of the game. Ten minutes later, desperate to deny the opposition the bonus point, Charlie Faumuina also scored and closed the gap with West finally nailing a kick.

After Blues coach Tana Umaga flushed his bench onto the field, Rene Ranger's presence on the field was bound to equate into points at some stage. Which it did after the Blues pressured the Chiefs defence with some barnstorming runs before they swung it wide to Ranger, who was all by himself on the wing with plenty of space and before dotting down, threw his body weight into a Chiefs defender, to repel him.