The Brumbies had a resurgent final 20 minutes to beat the Western Force 25-17 in Canberra on Friday.

The two-time champions looked like the dominant side throughout the first half until the final minutes when Force captain Heath Tessmann barged over the line to close the gap.

After Brumbies fly-half Wharenui Hawera missed a slew of kicks, the Force crept back into the game after another try in the second half and some successful kicks.

But after Force lock Ross Haylett-Petty was given a yellow card in the 70th minute, the momentum switched and tries from Kyle Godwin and Robbie Abel saved the game for the home side.

It's the Brumbies first win of the tournament after losses to the Crusaders in the first round and to the Sharks in the next, meaning the Brumbies can finally remove themselves from second from the bottom and leap frog the Western Force who were at the top of the Australian Conference. The Force drop to second with the Reds and Waratahs still to play.

The Brumbies drew first blood when they took the ball close to the Force line through some enterprising play. It was then sent wide to Wallaby winger Henry Speight who used powerful his legs and frame to drive over the line and score. Hawera failed to nail the extras.

They then doubled their lead on the scoreless Force after a nifty line break from scrum-half Joe Powell who took the pill right up to the tryline before the Canberra men sent it wide quickly, leaving the Force defence in disarray. Fly-half Wharenui Hawera then got the ball and despite his diminutive stature wrestled his way past the Force defenders to score. He could not convert his own try and score remained 10-0.

The Western Force claimed a try of their own minutes before the half time siren went, after a strong driving maul pushed the Brumbies right over their own line for hooker Heath Tessmann to score with fly-half Jono Lance closing the gap to 10-7 at half-time.

The Western Force obviously took a tongue lashing at half-time from their coach as the men from Perth scored minutes into the second stanza sustaining pressure on the home side and sucked the Brumbies defence into the midfield before sending it wide to Peni who scored his side's second five-pointer to take the lead after Lance's successful conversion.

After a revival from Canberra men they took the Force all the way to their line through some well-worked phase play and looked as though they might take the lead in the 53rd minute after some ideal try-scoring opportunities but the Western Force defence remained steadfast and eventually the away side won a penalty on their own line and kicked for touch.

Hawera then had the chance to close the gap after the Brumbies were given a penalty when the Force were caught off sides in their own 10 metre line but Hawera failed to nail the kick making his success ratio zero percent for the day at 60 minutes. He redeemed himself moments later after the home side were given another penalty when the Force collapsed a scrum to make the score 14-13 with 15 minutes to play.

A brawl broke out on the side of the field when Brumbies full-back sent an up-and-under high into the air for James Dargaville to chase. The winger chased well and took down the Force catcher with ease but was penalised for being off side at the ruck as he was getting up to the dismay of Brumbies coach Stephen Larkham. Lance used the opportunity well and slotted the kick from 40 metres out making the score 17-13 to the away side.

The Force took a knock to their momentum after Haylett-Petty was given a yellow card after a late hit on Powell after a the line out meaning the Force would play the last 10 minutes with 14 men.

Former Force player Kyle Godwin then scored his side's third try to take the lead after the Brumbies used a maul well to drive up the field before the Zimbabwean-born centre was given a short ball and crashed through the Force defence. Hawera made no mistake this time and slotted the conversion.

The Brumbies then closed out the game when replacement Robbie Abel crossed the line in the 80th minute to grab a fantastic comeback, first win for the Brumbies. 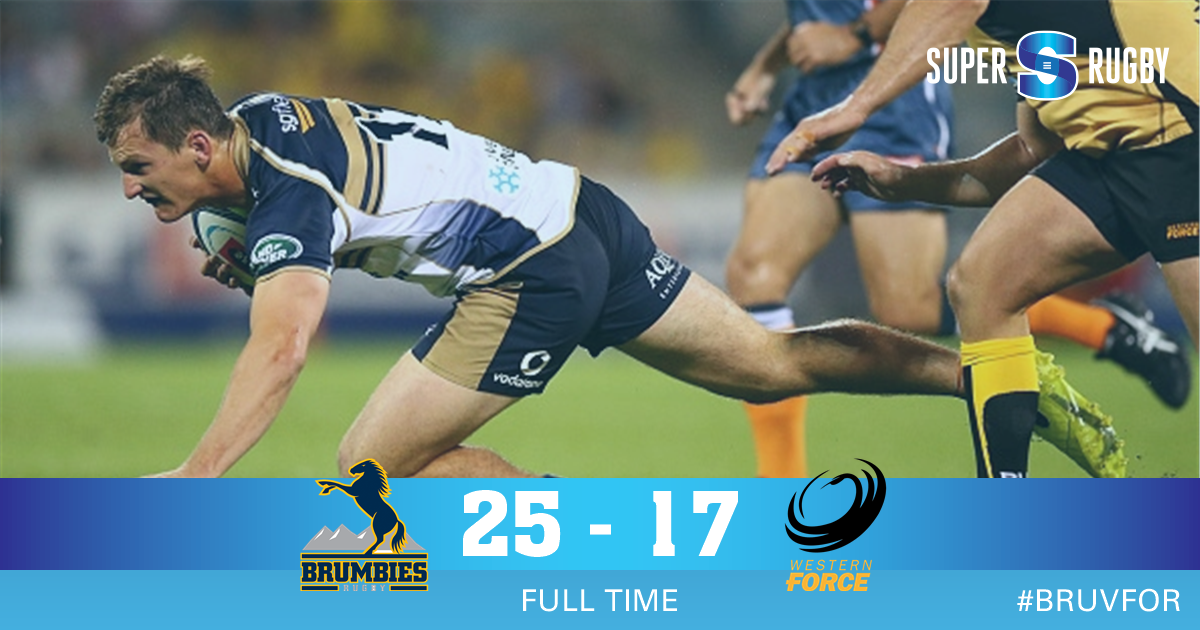