Replacement fly-half Curwin Bosch led the Sharks to a 37-14 victory over the Waratahs in Durban on Saturday.

The Sharks were dominant for most of the fixture after early tries from number eight Tera Mtembu and Bosch gave the Sharks an 18-0 lead 20 minutes in.

Israel Folau showed his class after scoring a brace but it was not enough to elevate his side out of the loss.

The Sharks will be positive after this game as their star performers included Bosch, who replaced Patrick Lambie in the seventh minute. The young utility-back scored a try and nailed several great kicks from the tee for his side, while outside centre Lukhanyo Am’s form increases with every week after another sublime performance.

With the win the Sharks draw with the Lions in the Africa 2 Conference with their Johannesburg rivals yet to play, while the Waratahs languish at fourth place in the Australia Conference.

The Sharks drew first blood when they initiated some enterprising play to get into the Waratahs half.

After some quick thinking they went wide and Clément Poitrenaud tapped the ball wide to Mtembu, for the final movement, who simply had to canter over for the score. Bosch then knocked over a penalty moments later to make the score 8-0.

The Waratahs’ cause took another knock after Jack Dempsey was yellow carded, while the Sharks were gaining momentum.

The Sharks then took the ball up to the line again and were looking dangerous before being awarded a penalty and Bosch knocked over another three points.

Despite the yellow card the Waratahs looked in control of the game as they pressed on the Sharks line. The tides changed rapidly in favour of the Sharks once again when Bosch sniped an interception and showed blistering pace to burn the ‘Tahs’ cover defence to score, before adding the extras which left the score line 18-0.

The Waratahs finally etched their first mark onto the score sheet when they chipped down field and Am did well to chase the ball and almost collected it, but the ball had other ideas and bounced straight into the hands of Folau who scored, with winger Reece Robinson slotting the conversion.

The Sharks replied moments later after Bosch kicked over two consecutive penalties which made the score 24-7.

As half-time approached the Sharks refused to go into the change rooms silently and on the 42nd minute, the Waratahs were pressing on the Sharks’ 22-metre line and were looking rather dangerous, before a handling error that saw the ball passed backwards to no one.

Winger Kobus van Wyk used the opportunity brilliantly by collecting the ball and running 70 metres to score before Bosch added the extras. The half-time score was 31-7.

Folau nabbed his second try of the game when the star League convert made a searing run down the right wing before giving it inside to a support runner.

The Waratahs set up a ruck on the Sharks’ five-metre line before spreading it wide and Folau got himself into the perfect position to receive the pass to score between the sticks. Robinson added the two points.

The mercurial boot of Bosch kept the scoreboard ticking as the young fly-half added another three points to his team’s score, with only eight minutes to play as the Sharks tried to close the game out.

The Waratahs did what they could to surge their way over the line after several attacking movements, but the Sharks defence remained steadfast and won the game 37-14. 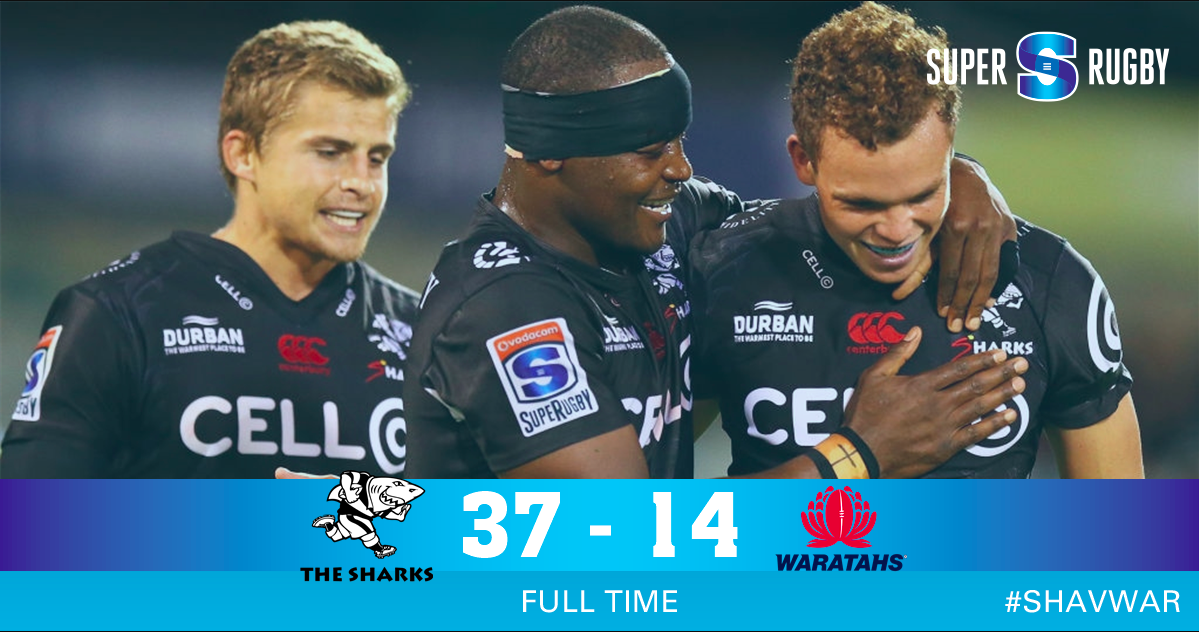