The Highlanders secured their first Super Rugby win of the season when they beat the Blues 16-12 in wet conditions Auckland on Saturday.

As the scoreline suggests, this was a tight tussle with the result in the balance throughout the game although the standard of this game was not that of a usual New Zealand derby.

The Highlanders eventually outscored their hosts by one try to none, although the win could prove costly for the 2015 champions as both Waisake Naholo and Lima Sopoaga had to leave the field through injury.

Both sides committed several unforced handling errors in attack and their decision making was not of its normal high quality.

The Highlanders dominated early on and came close to opening the scoring as early as the sixth minute. This, after Richard Buckman gathered a pass from Naholo before offloading to Malakai Fekitoa, who had the ball knocked from his grasp while crossing the whitewash by Matt Duffie.

The visitors took the lead courtesy of a Lima Sopoaga penalty minutes later after the home side infringed on defence at a ruck.

Fekitoa made up for his earlier mishap when he pounced on an error by Rene Ranger and Michael Collins, who failed to deal with a bouncing ball inside their 22 - after a well-weighted box-kick from Aaron Smith.

The ball was eventually gathered by Fekitoa, who traded passes with Marty Banks, before diving over for the opening try.

Sopoaga slotted the conversion which meant the visitors were leading 10-0 midway through the half. The Blues upped the ante on attack and narrowed the gap via an Ihaia West penalty in the 24th minute after Richard Buckman infringed at a ruck.

On the half-hour mark, West narrowed the gap to four points when he slotted his second penalty after Luke Whitelock was penalised for a high tackle on Augustine Pulu.

The rest of the half was littered with handling errors and poor execution on attack from both sides and there was little enterprising play up to the interval.

Three minutes after the restart, Sopoaga extended his side's lead from the kicking tee after West was penalised for holding onto the ball on the ground.

It did not take long for the Blues to respond, however, and after the Highlanders defence was blown up for offside play on defence, West added his third penalty in the 50th minute. 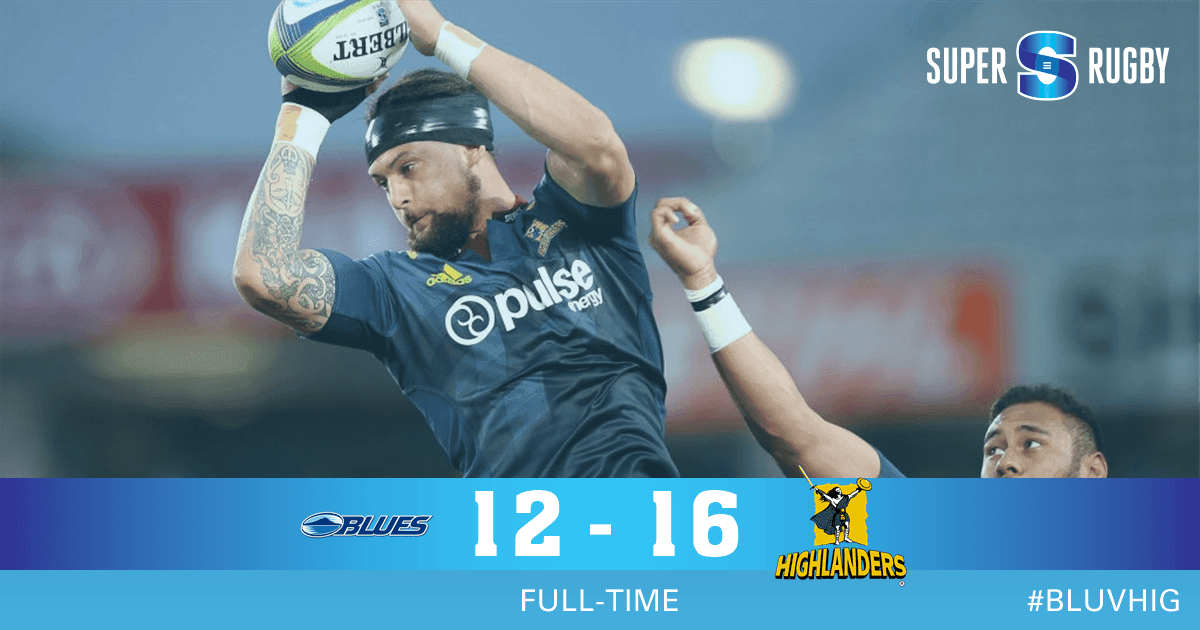 The next 15 minutes was a slugfest as both sides tried to take control of proceedings but neither side could add any points during this period.

The Blues wasted a golden opportunity to take the lead in the 65th minute when George Moala gathered a pass from Piers Francis close to the halfway line and made a superb break.

He was eventually hauled in by the cover defence close to the Highlanders try-line but his pass was intercepted by Buckman. Three minutes later, Francis narrowed the gap to a point when he converted his side's third penalty after the visitors were blown up for straying offside on defence again.

The last 10 minutes was a frantic affair as the Blues went in search of a try which would give them the win and although the Highlanders were reduced to 14 men when Gareth Evans was sent to the sin-bin in injury time - for a cynical defensive infringement close to his try line - they held on for their maiden win.