The Crusaders staged a remarkable second-half comeback to claim a 22-20 victory over the Reds in Brisbane.

Just like last week, when they fought back to beat the Highlanders in Dunedin, the seven-time champions were trailing on the scoreboard for most of this match but a Mitchell Hunt penalty in injury time secured them their third win from as many matches in 2017.

The Reds had the better of the early exchanges and dominated territory and possession, but the Crusaders didn't panic and eventually outscored their hosts by three tries to two after trailing 20-7 at half-time.

The win moves the Crusaders into second place on the New Zealand Conference – behind the Chiefs – while the Reds are in joint first place with the Brumbies although they could be overtaken by the Waratahs who play the Sharks in Durban later on Saturday.

The Reds made a superb start and opened the scoring in the fifth minute via a Quade Cooper penalty. The Crusaders were then dealt a blow when Israel Dagg was forced off the field with a knee injury.

This after gathering a pass from Cooper inside the visitors' 22 and then slipping through a tackle from Jack Goodhue. Cooper added the extras which meant the hosts led 10-0 and things went from bad to worse for the Crusaders 10 minutes later when, like Dagg, Seta Tamanivalu limped off with a crocked knee.

Shortly afterwards, Kerevi left his stamp on this match again – this time as provider – when he gathered a pass from Stephen Moore just inside the Crusaders' half and slipped out of a Cody Taylor tackle before setting off towards the visitors' try-line.

He still had work to do but did well to draw in a couple of defenders inside the visitors' 22 before throwing a long pass to Eto Nabuli who crossed for an easy try.

The visitors did not take long to respon though and three minutes later, former Reds wing Digby Ioane launched an attack before delivering a chip kick upfield.

The ball was gathered by Mitch Drummond who went over the whitewash with two defenders on his back. Mitchell Hunt slotted the conversion but five minutes later, Cooper kicked a penalty which gave his side a 13-point lead at the break.

The second half saw the visitors stepping up a few gears on attack although neither side added to their points tally during the first 20 minutes of the half. 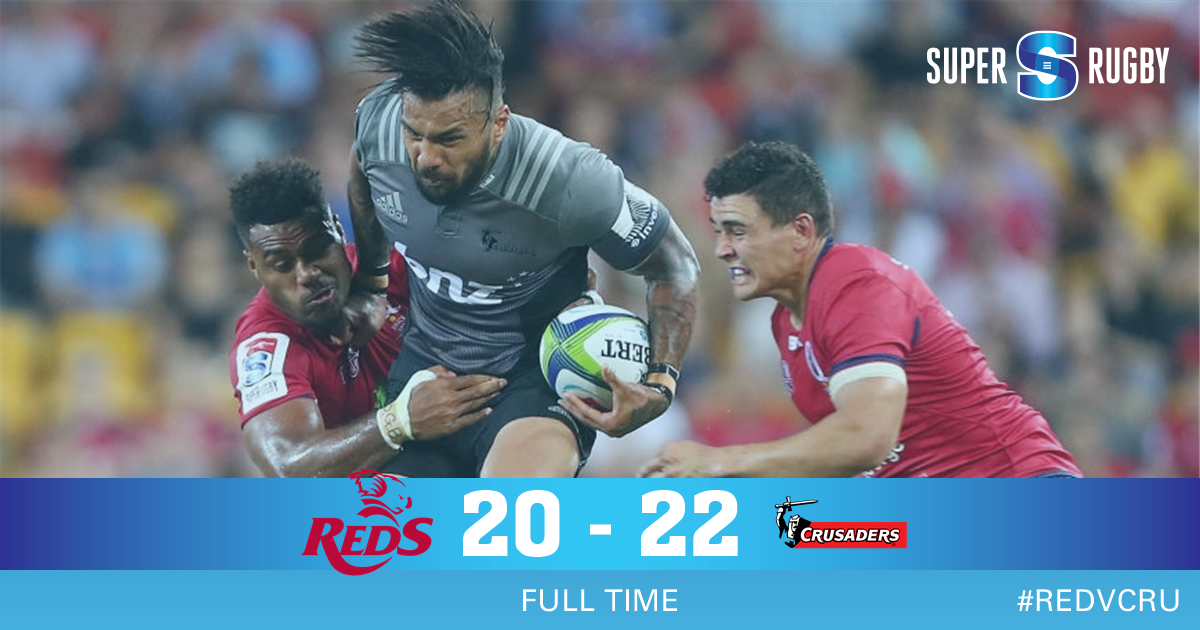 The Reds had a chance to extend their lead in the 57th minute, after the Crusaders were blown up for illegal scrummaging, but Cooper's shot at goal was off target.

Five minutes later, the Crusaders narrowed the gap when Bryn Hall got over for their second try after Hunt and George Bridge laid the groundwork in the build-up.

Hunt failed to slot the conversion and the visitors suffered a setback in the 69th minute when Jordan Taufua was sent to the sin bin for punching Rob Simmons.

That did not deter the Crusaders though and four minutes before full-time Hall scored his second try after the visitors took the ball through several phases in the build-up.

With time running out on the clock, the visitors went in search of the win and they were rewarded in the game's closing stages when Hunt held his nerve to land that crucial penalty after Kerevi went off his feet at a ruck.