The Crusaders claimed their third successive come-from-behind win of the season when they beat the Blues 33-24 in Christchurch on Friday.

Just like their previous fixtures against the Highlanders and the Reds, the seven-time champions were trailing by a huge deficit at half-time but launched a superb second half fightback and eventually outscored the Blues by five tries to three.

The result means the Crusaders are still unbeaten after four matches and they move provisionally top of the New Zealand conference although that situation could change if the Chiefs beat the Rebels later on Friday.

Meanwhile, the Blues leave Christchurch with their tail between their legs and they are still in fourth place in the New Zealand conference although they could be at the bottom of the table if the Highlander beat the Hurricanes on Saturday.

The Blues were fastest out of the blocks and after dominating the early exchanges, George Moala crossed for the opening try in the 11th minute after Augustine Pulu and Matt Duffy played prominent roles in the build-up.

The Crusaders seemed stunned by that opening salvo from their opponents but a quick change in tactics saw the home side gradually taking control of proceedings.

After a 30 metre drive from a line-out, inside the visitors' half, the ball was shifted it wide to Ryan Crotty who was tackled into touch close to the Blues' corner flag by Melani Nanai.

And five minutes later, the hosts took the ball through several phases inside the Blues' 22 before Bryn Hall fired out a superb skip pass to Manasa Mataele, who dived over in the left-hand corner.

It did not take long for the Blues to respond, however, and five minutes later Pulu crossed for his side's second try after side-stepping a couple of opponents deep inside the Crusaders' half.

Shortly afterwards, the Blues took the ball through several phases inside the Blues half before Moala found himself in space on the edge of the home side's 22. The All Black was confronted by Joe Moody but ghosted past the prop thanks to a superb turn of speed before crossing for his second try.

Piers Francis slotted the conversion which meant the Blues had their tails up as they led 21-5 at the interval.

The visitors were fastest out of the blocks after the break when a Francis penalty extended his sid's lead in the 48th minute, but it wasn't long before the Crusaders took control of proceedings.

In the 53rd minute the hosts were camped close to the Blues' try-line and they were soon celebrating when Pete Samu spotted a gap at a ruck before barging over.

Mitchell Hunt added the extras and two minutes later, he slotted his second conversion when Ben Funnell crossed for the Crusaders' third try from a line-out drive inside the Blues' 22.

That meant the Blues led 24-19 and for the next 10 minutes the men from Auckland were on the defensive before Hunt rounded off a flowing move which tied the score at 24-24.

His conversion gave his side the lead for the first time in the match and they secured the result when Mitchell Drummond sold Patrick Tuipulotu a dummy before crossing for his side's fifth try in injury time. 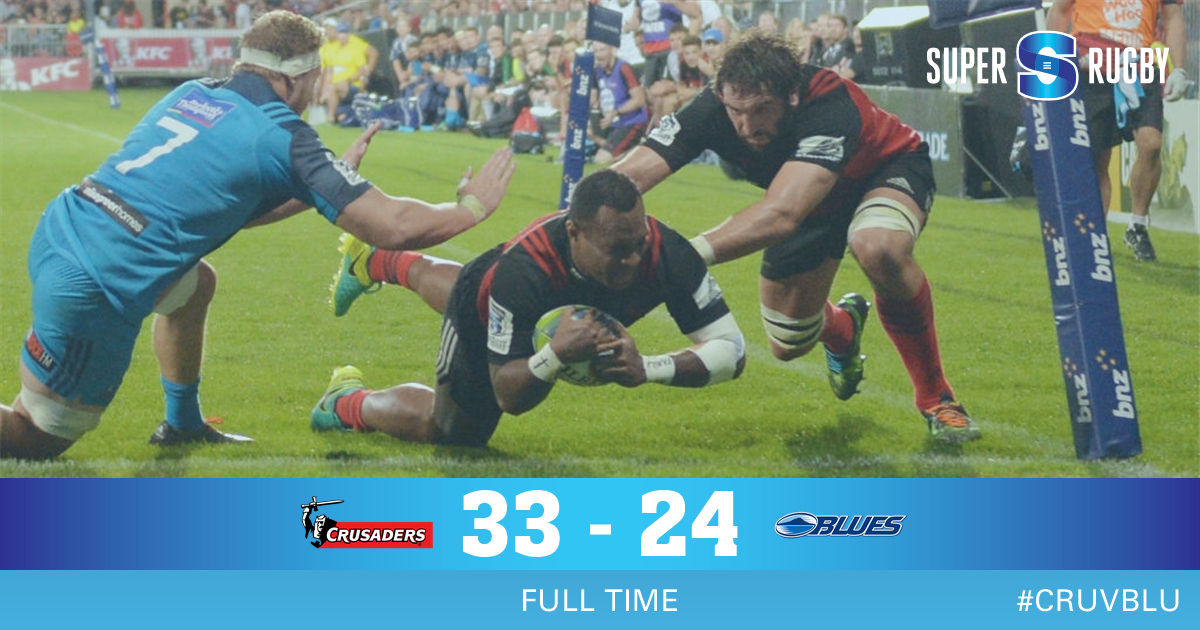