The Bulls claimed their first win of the Super Rugby season on Friday as they beat the Sunwolves 34-21 despite having a player red carded.

Renaldo Bothma was the man sent off in the 42nd minute but their numerical disadvantage seemed to galvanise the Bulls, who scored four tries.

Jan Serfontein got a double while Pierre Schoeman and Jason Jenkins also crossed, with Handré Pollard and Tian Schoeman adding the extras.

In reply the Sunwolves' scorers were Kenki Fukuoka and Ed Quirk but they did not capitalise on the red card as they suffer a fourth defeat.

Few were expecting the Sunwolves to follow up last weekend's improved performance at the Cheetahs in successive matches, especially against a rested Bulls side. But the visitors proved a real threat early on and went into the break trailing by just three points at 17-14 adrift.

The Sunwolves led after two minutes thanks to a penalty from Hayden Cripps and their buffer lasted 10 minutes before the Bulls eventually crossed after sustained pressure in the 22. From turnover ball eight metres out, returning centre Serfontein powered his way over for 7-3.

Pollard added to his conversion with a penalty following an offside decision as the Bulls appeared to have found their feet on 23 minutes.

The Sunwolves had other ideas as Cripps cut the gap to 10-6 after Lood de Jager was in the path of scrum-half Keisuke Uchida at a ruck.

Three minutes later the Pretoria outfit gave themselves some welcome breathing space thanks to an immensely powerful lineout drive that saw loosehead prop Schoeman cross, with fly-half Pollard adding the extra two. But again Cripps hit back with a penalty to make it 17-9.

They weren't done there too as a superb try, sparked by full-back Shota Emi's sideways run along halfway, led to wing Fukuoka straightening and then stepping the last man for the five points. Fly-half Cripps was wayward with his conversion attempt so it was a three-point game.

After the turnaround came a key moment in the match when Bothma saw red for a high tackle two minutes after the resumption. It didn't deter the Bulls though who appeared rallied by the card as lock Jenkins strolled over for a crucial try four minutes later. That made it 24-14.

Pollard should have further extended the margin from the tee but was off-target with a penalty soon after. His replacement Tian Schoeman made no such mistake on 59 minutes though after a scrum offence from the Sunwolves. With a quarter of the game left the Bulls looked solid. 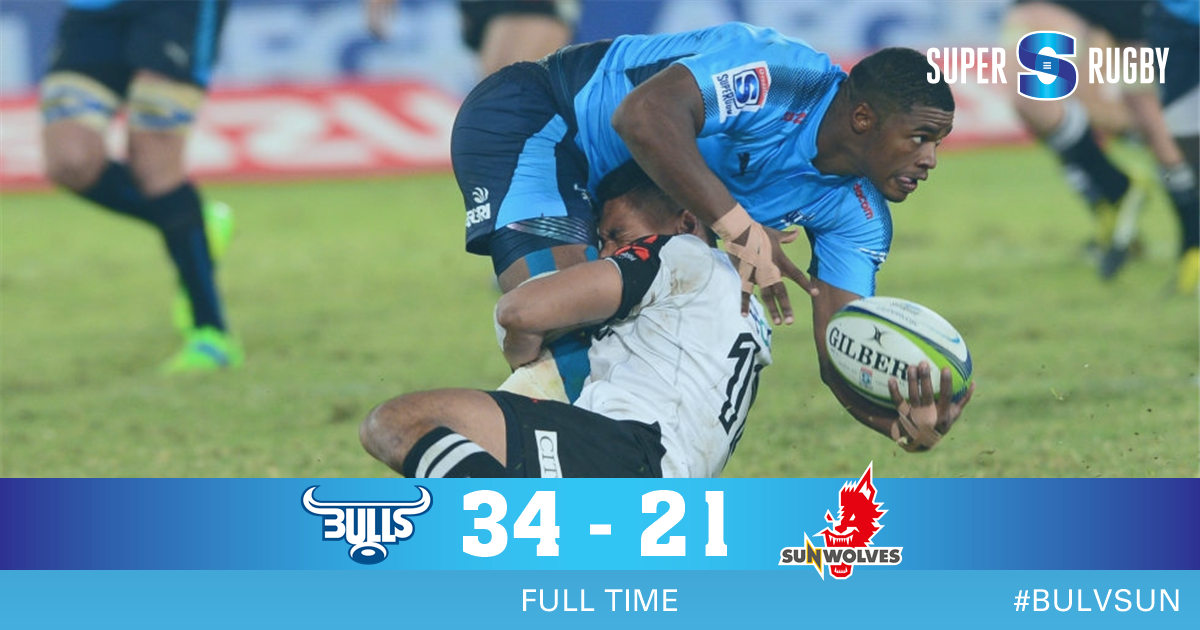 Jenkins was not so assured with his grip however shortly after as he dropped the ball over the try-line on 63 minutes. It was unforgivable.

Fortunately for Jenkins and the Bulls they did not have to wait long for their fourth try to arrive as Serfontein then crossed over from 30 metres out. Schoeman's fine touchline conversion pushed his side into a 34-14 advantage in an impressive spell with just fourteen players.

The Sunwolves did put in a spirited finish at Loftus with a try from Quirk and should have had a third via Liaki Moli at the death, but he lost the ball over the whitewash as the Bulls comfortably held on for the four points.