The Hurricanes scored five tries against their compatriots, as Ngani Laumape and Vince Aso scored two tries each after some incredible work from their inside backs.

Ardie Savea, Matt Proctor and Julian Savea also crossed the line for the Hurricanes, while the Highlanders scored two through Matt Faddes and Elliot Dixon.

With the bonus-point win the Hurricanes jump to the top of the table to 15 points as they leap frog the Chiefs. The Highlanders desperately needed a win today as they are stuck at the bottom of the table with five points.

The game got off to a quiet as ten minutes in no points had been scored despite a vicious competition on the field.

The Hurricanes would be the first on the scoreboard though when they set up a maul ten metres out and drove the Highlanders back for Ardie Savea to score, but Barrett missed the conversion.

The Highlanders looked as though they had scored when Malakai Fekitoa made a searing break down the right wing, before Jordie Barrett made a hit on the outside centre taking him out of bounds. The referee went to the TMO to check whether the tackle was illegal but Gardner was happy and the Hurricanes had possession on their five-metre line.

Rookie number ten Fletcher Smith then closed the gap after the Highlanders were awarded a penalty from 40 metres out and the Smith keenly slotted it through.

The Highlanders then took the lead for the first time in the match when the visitors had a scrum ten metres out from the Crusaders line which they used well after replacement Matt Faddes ran a hard line off the inside shoulder on the blindside of the set-piece and Smith gave him a pop pass to score.

The Hurricanes stole back their lead after a perfectly weighted chip over the defence from Jordie Barrett went straight into the hands of Ngani Laumape who scored in the corner. The half ended 10-8 to the hosts after a tight contest.

The Hurricanes then came out of the blocks firing in the second half after scoring in the 42nd minute when Proctor finshed off a great run of play from the home side. Their luck would run out moments later when Perenara was yellow carded for a deliberate knock down.

Once the number nine was off the Highlanders used the advantage well and scored through flanker Dixon. The Highlanders had a five-metre lineout, and went wide before Dixon barged over.

Laumape then scored his second try of the match after receiving the ball in the midfield before showing some incredible pace to dance around the opposition defence to score in the corner, charging through Ben Smith.

Julian Savea scored his side’s fifth try of the match after receiving a pass down the left wing from Wes Goosen and simply cantered over the line for an easy try.

And the champions continued their dominance of the second half after Aso scored his first try of the match, and after ten minutes would grab his second, to seal the game off. 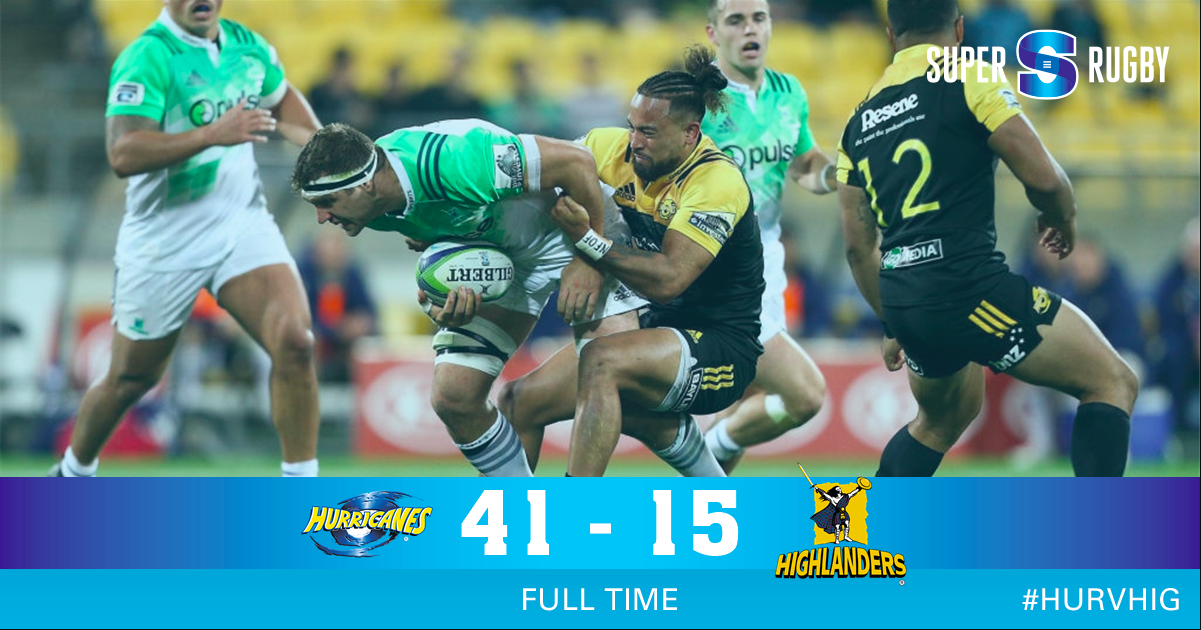