Ramiro Moyano was their star with a hat-trick of tries while Matías Alemanno and a penalty try were their other offerings to seal a bonus-point.

The Cheetahs’ try-scorers were Michael van der Spuy and Joseph Dweba as they went down to a second loss in a disappointing performance.

The Jaguares were rampant in the opening period as they went over for three tries with the Cheetahs only managing one in a 24-7 scoreline.

Moyano crossed after eight minutes when he showed brute strength and speed down the left wing, this just before Santiago Cordero was taken from the field after Gonzalo Bertranou’s knee caught the back of his head. He was able to watch the second-half which was a positive sight.

With Nicolás Sánchez suspended, Juan Martín Hernández was wearing the fly-half jersey for the Jaguares and he added to his conversion with a penalty in the 19th minute when Cheetahs tighthead prop Tom Botha was penalised for offside. At 10-0 the home side appeared in good form.

Three minutes later they had their second try and it came from close range, as second-row Alemanno powered over, Hernández making it 17-0.

But the Cheetahs crucially got on the board next as recycled ball found centre Van der Spuy who finished well, with Niel Marais converting.

The Jaguares weren’t done in the first-half though and excellent handling led to their third try, as Moyano was put over by Agustín Creevy.

Hernández was on target again after the break, extending his side’s lead to 20 points from the tee on 53 minutes, following a late tackle.

The Jaguares though were out of bonus-point territory due to the three to one margin and subsequently went looking to extend that to three, with replacement Bautista Ezcurra looking dangerous with ball in hand. It seemed to only be a matter of time before they’d get over again.

The Cheetahs weren’t going to roll over though and they came close to cutting the lead when Marais looked to have scored. However, replays showed he lost the ball over the line in a costly mistake, with the visitors deserving of a score in a spell they dominated the territory.

Despite their dominance in the second-half the try didn’t appear to be forthcoming, but when Santiago González Iglesias was yellow carded for a high tackle on Van der Spuy after Clayton Blommetjies’ break, it eventually came through replacement hooker Dweba who made it 27-14.

But the Jaguares would finish with a flourish as Moyano won the foot race to Jerónimo de la Fuente’s hack downfield to claim his third try before the driving maul resulted in referee Paul Williams awarding a penalty try in the final play of the game, thus securing the maximum. 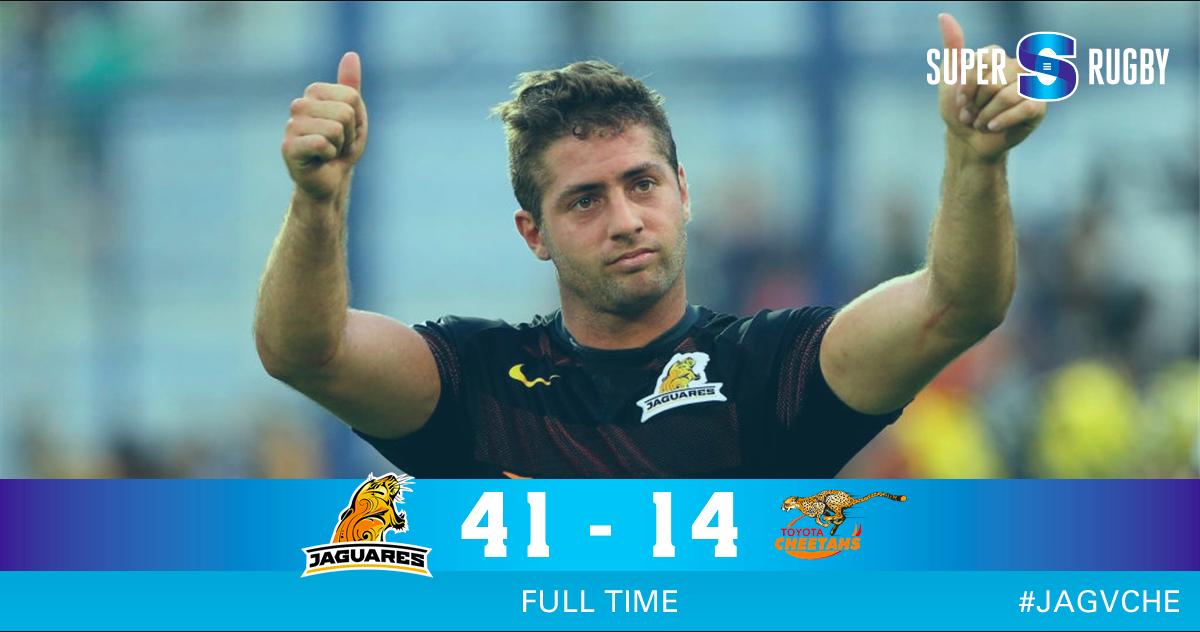