Blues get back to winning ways

The Blues ended a run of three straight losses as they claimed a 38-14 bonus-point win over the Bulls in North Harbour on Saturday.

A much-improved second-half effort saw them cross five times to add to Augustine Pulu's early effort as they get their second victory.

Matt Duffie grabbed a double with Ihaia West, Matt Moulds and Melani Nanai also crossing for the hosts, with the Bulls' scorers being Lizo Gqoboko and Rudy Paige as they lose their third game of the Super Rugby season.

Errors from both sides created a scrappy opening half in North Harbour in a low-scoring 40 minutes which saw the game tied up at 7-7.

It had all started so promisingly for the Blues though when dangerous scrum-half Pulu finished off a lovely exchange down the left sideline involving full-back Michael Collins and wing Nanai. With fly-half Piers Francis knocking over the conversion it was a seven-point advantage.

But the Bulls, who claimed a first win of the campaign last week against the Sunwolves, hit back on 18 minutes when a brilliant touch-finder from fly-half Handré Pollard took them into the corner. Following an unsuccessful lineout drive, loosehead Gqoboko crossed and it was 7-7.

There was to be no further score until the second-half though as those errors - and the fact the Blues first snubbed a kickable penalty in favour of heading to the corner and then Francis missed off the tee soon after - meant it was a fractious opening 40 minutes at QBE Stadium.

The second half was much better in terms of taking their chances from the Blues and it took just five minutes for them to cross for their second try, with a lovely offload out the tackle from in-form full-back Collins seeing Duffie race over from 20 metres out. Francis made it 14-7.

Eleven minutes later that cushion was stretched to 12 points as a well-weighted cross-kick in the Bulls red zone from Francis found Duffie, who was over for a simple try.

The missed conversion was Francis' last act as West replaced him at fly-half and relished the closing stages.

Despite being a man down when flanker Jimmy Tupou was binned for a neck roll, the Blues cut loose with West spotting a gap in the 22 and promptly slicing through it.

That pushed the Blues into a 24-7 lead and also put the bonus point on the board with 13 minutes remaining.

The Blues eyed more though and made sure of the maximum haul with further crossings from replacement hooker Moulds and wing Nanai adding the gloss to a comfortable win that puts them on 11 points from five games. 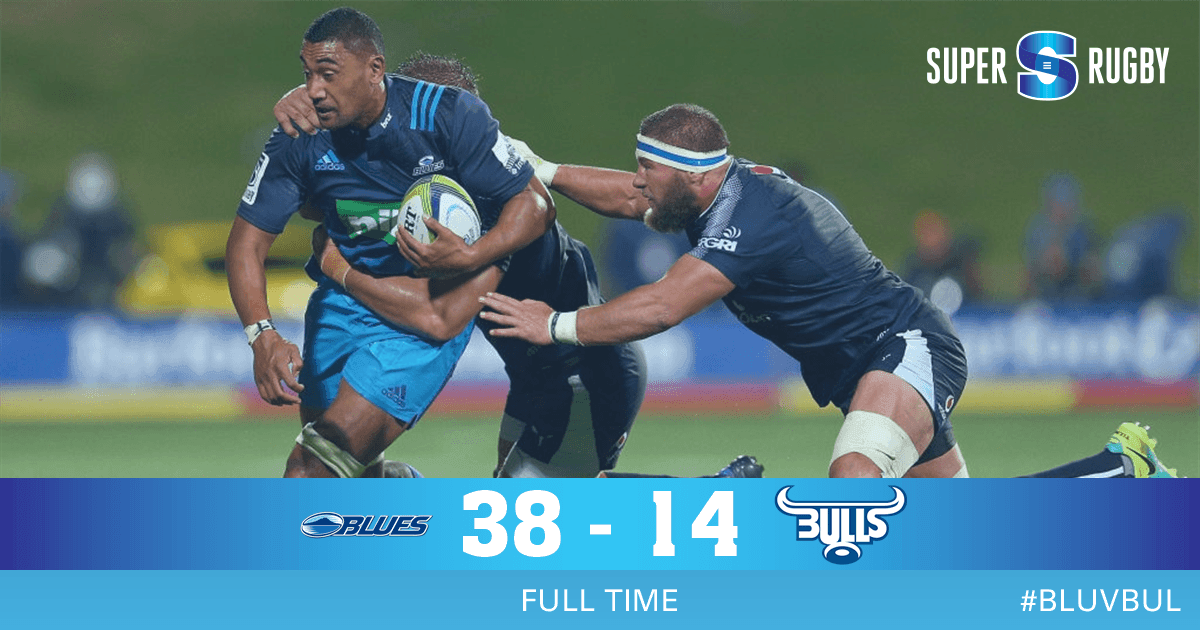