The Highlanders came from 10-0 down to battle past the Brumbies 18-13 in their Super Rugby meeting in Canberra on Saturday.

It wasn't pretty or entertaining as a contest but for what is only their second victory of the season, the Highlanders won't care about that as they make it three successive triumphs against the Brumbies over recent seasons.

The Highlanders scored two tries as Patelesio Tomkinson and Aki Seiuli dived over, with Marty Banks kicking eight points for his side.

In reply the Brumbies could only muster one try, through Chris Alcock, as they get a losing bonus point and remain Australia's top seed.

It was a low-scoring first-half in Canberra as the Brumbies looked to grind down their opponents, who have been out of sorts this season.

Going into the match the Highlanders had won just one of their four games while the Brumbies were two from four, with both not yet firing.

It showed in the early sparring as neither seriously troubled their opposition's whitewash, with only a Hawera penalty on the board after 26 minutes of action. Those three points came in the 15th minute after an offside at a ruck, he made no mistake from 40 metres out.

Things were to get a whole lot better for the home team in the 27th minute when a clever lineout move saw Alcock dummy to attack open before turning to the blindside of the set-piece, fending and showing good pace to cross. That made it 10-0 to the Brumbies after the conversion.

The Highlanders, missing several players due to injury, desperately needed something before half-time and fortunately for them they scored a try in the 39th minute following a sustained period of pressure in the red zone.

The try came from first-phase ball off a scrum, with slick passing from Aaron Smith and Richard Buckman seeing wing Tomkinson go over on the right. Fletcher Smith was unable to add the extras.

After the break the contest continued in its knock-out feel as only a penalty apiece from Hawera and Highlanders replacement pivot Banks - both for offside - troubled the scorers until the 63rd minute. At 13-8 it remained anyone's game as both coaches opted for fresh legs.

Crucially the Highlanders got the next points and in truth it was gift-wrapped for Banks from the tee as Lolo Fakaosilea's late hit on scrum-half Smith was right in front of referee Marius van der Westhuizen. That made it a two-point ball game with just over 16 minutes to play.

Territory was obviously going to be key at this stage so when replacement prop Siosuia Halanukonuka failed to roll away at the ruck, the Brumbies duly set up camp in the Highlanders 22, launching their now infamous driving maul. Unfortunately for them it did not bear fruit.

It came back to haunt them as after Joe Wheeler was held up over the try-line, prop Seiuli then barged over soon after to nudge his side in front, with Banks adding the extras to make it an 18-13 advantage to the visitors.

And despite the Brumbies pressing in the closing stages, that was the final scoreline as the HIghlanders managed to hold for a priceless win they'll hope kick-starts their season after what has been a disappointing start. 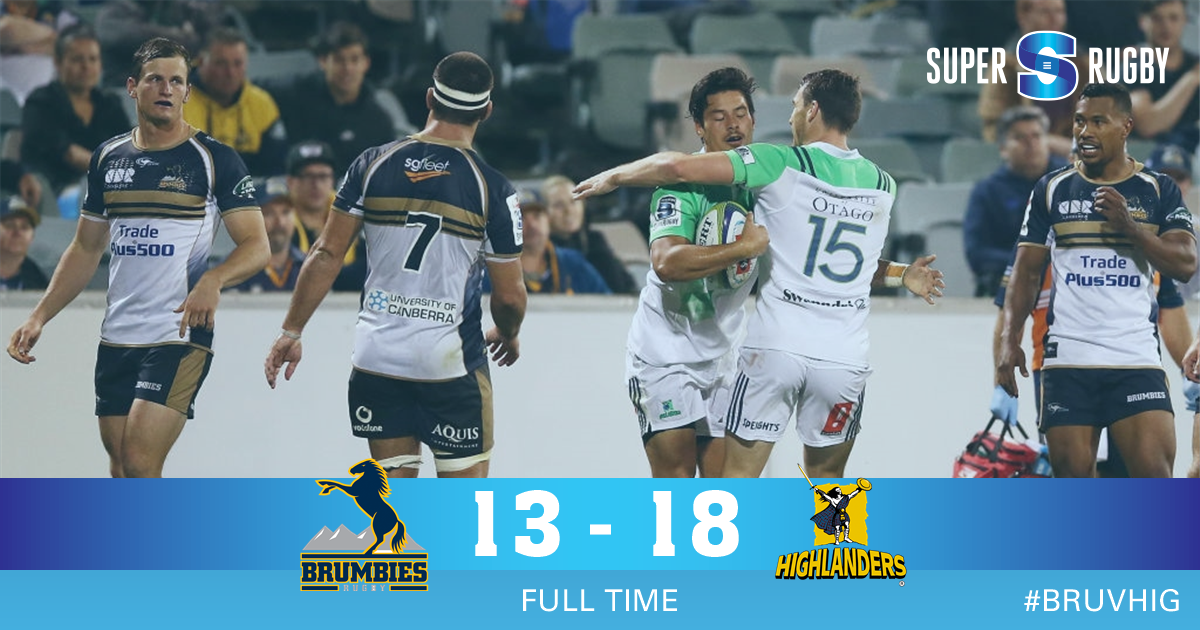