The Lions moved to the top of the South African group after a strong first half in Port Elizabeth propelled them to a 42-19 win over the Kings.

New Lions wing Madosh Tambwe grabbed a double on his Super Rugby debut as the visitors finished with six tries to their name, carrying on from last week's one-sided rout against the Reds.

The Kings had a debut try scorer of their own in 19-year-old winger Yaw Penxe but the gap opened up by the Lions in those first 40 minutes was too much the home side to overcome.

Having pushed the Sharks close the previous week, once again the Kings frustrated their opponents, but this time only once the result looked beyond doubt in a flat second half.

Springbok fly-half Elton Jantjies, one of the six try scorers, finished with a haul of 15 points after also kicking five conversions.

The opening in any case was a comedy of errors. First the Kings struck when Lions full-back Andries Coetzee's kick was charged down by Andisa Ntsila, who followed up to score.

Then defending right back on their try line, a loose pass from Kings number eight Ruaan Lerm was gratefully plucked out of the air by Tambwe to score his first Super Rugby try.

After that bizarre start the Lions began to settle, building pressure in the Kings' 22 and eventually striking through their rolling maul for the go-ahead try, Marx coming up from the bottom of the pile. Jantjies converted to make it 14-7.

Momentum continued flowing the way of the visitors with Jantjies stepping his way through some tired tacklers after only 14 minutes, adding the extra two to then make it 21-7.

The Kings however refused to lie down, coming up with a moment of magic from Ntsila. Having counter-rucked to great effect the flanker broke upfield, selling an exquisite dummy to Faf de Klerk before feeding Penxe to score on his debut.

The Lions hit back thanks to a second Tambwe score, made by Coetzee's excellent offload, with Jantjies making no mistake, and with four tries in the bag before half an hour the Lions were now fully in control of possession and territory.

Jaco Kriel was the next to help the Lions stamp their authority on the match, powering through the middle of the Lions' maul to cross, and with Jantjies' fifth conversion the Lions led comfortably 35-12 at the break.

Malcolm Jaer's bright start to the second half was rewarded in a try for the Kings as the hosts struck first, the full-back showing his speed to step through for a score.

But then despite a long time spent in Kings territory the Lions couldn't find a way through the defence, having a sixth score ruled out by the TMO for lack of grounding.

And as fatigue set in the number of errors and penalties from both sides continued to rise in a second half to forget.

After a 32-minute wait between a score from either side the Lions at last broke the deadlock through Harold Vorster, after a well-worked move off the lineout involving Warren Whiteley and Kriel, which took the Lions past the 40-point barrier and gave them the bonus point.

Try as they might with a desperate late attack the Kings couldn't find the five-pointer required to take away that try bonus point for the Lions, who won comfortably without playing at their best. 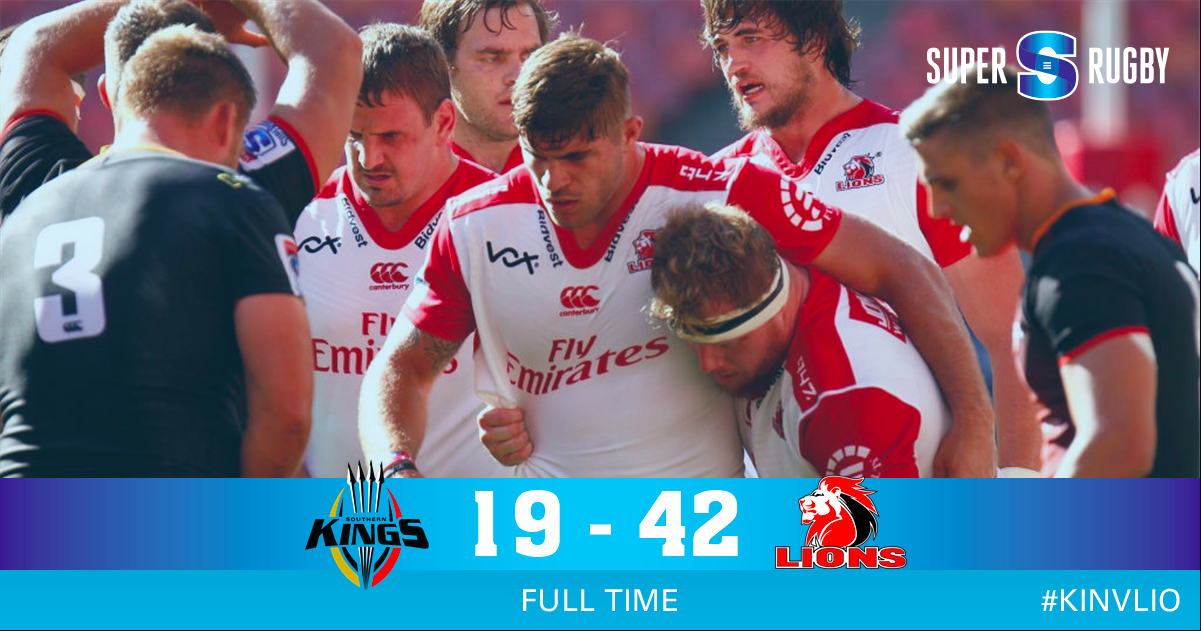