The Sharks came out on top in a see-sawing tussle with the Cheetahs on Saturday, scoring four tries in a 38-30 victory in Bloemfontein.

Two scores from winger Kobus van Wyk as well as the boot of rising star Curwin Bosch, who finished with 18 points, were enough for the Sharks to secure their fourth win of the season and to keep the pressure up on the Lions and Jaguares.

The Cheetahs more than played their part in a tense contest, one they were kept in by the boot of fly-half Fred Zeilinga, but ultimately fell away in the final quarter.

Zeilinga, the former Shark, opened the Cheetahs account after the visitors failed to roll away at the ruck, but the game's first try was not far away.

Breaking deep into Cheetahs territory Lukanyo Am made a fine break before releasing the veteran Lwazi Mvovo, whose dummy sold the defence before coasting over. Bosch converted to make it 7-3.

The young fly-half was on target again minutes later with a penalty to stretch the lead to seven points and things improved even further for the Sharks when Cheetahs back-row Oupa Mohoje was yellow carded after 24 minutes.

And after a patient build-up with the Cheetahs stretched, and good work from the Sharks forwards, the ball was quickly spread to the wing for Van Wyk to touch down with ease.

Somewhat adrift at 15-3 the Cheetahs needed a response and it came from the captain Francois Venter, palming off André Esterhuizen and having too much speed for the cover defence before dotting down. Zeilinga's conversion made it 15-10.

That score lifted the noise levels from the crowd and after former Cheetahs prop Coenie Oosthuizen saw yellow for a high tackle, suddenly the home side had all the momentum.

Zeilinga slotted the resulting penalty to cut the Sharks' lead to just two points but it was the Cheetahs who went into the break ahead.

Zeilinga's boot continued to have a major say in the contest after his third penalty opened up an eight-point gap for the Cheetahs, with the Sharks having been pulled up for an early tackle, and the home side continued to grow in confidence.

But after the ball went loose when the Cheetahs stripped the ball in the tackle it was the Sharks who reacted quickest, Van Wyk scooping up the loose ball and fixing up Jonker before strolling over for his second try. Bosch's conversion made it a one-score game again at 23-22.

Naturally as a result the game was there for the taking, with all the exciting backs led by Raymond Rhule and Am having their moments with the ball in hand.

Bosch put the Sharks ahead 25-23 with his second penalty from around 40 metres out, as both teams began to tighten up realising the result was up for grabs.

A basic mistake from Clayton Blommetjies looked set to punish the Cheetahs when he accidentally carried the ball into touch fielding a kick.

The Sharks didn't need a second invitation; replacement back-row Daniel du Preez touching down after a rampant maul split the Cheetahs defence wide open. Bosch impressively landed the conversion, which crucially took the Sharks more than a converted try away from their hosts at 32-23.

A fourth Bosch penalty extended that margin to 12 points, and with the Sharks scrum now well on top there was no way back for the Cheetahs.

Bosch struck again after a scrum infringement by the Cheetahs and while the hosts did hit back through a late try from Raymond Rhule, converted by Zeilinga, it had no effect on the outcome. 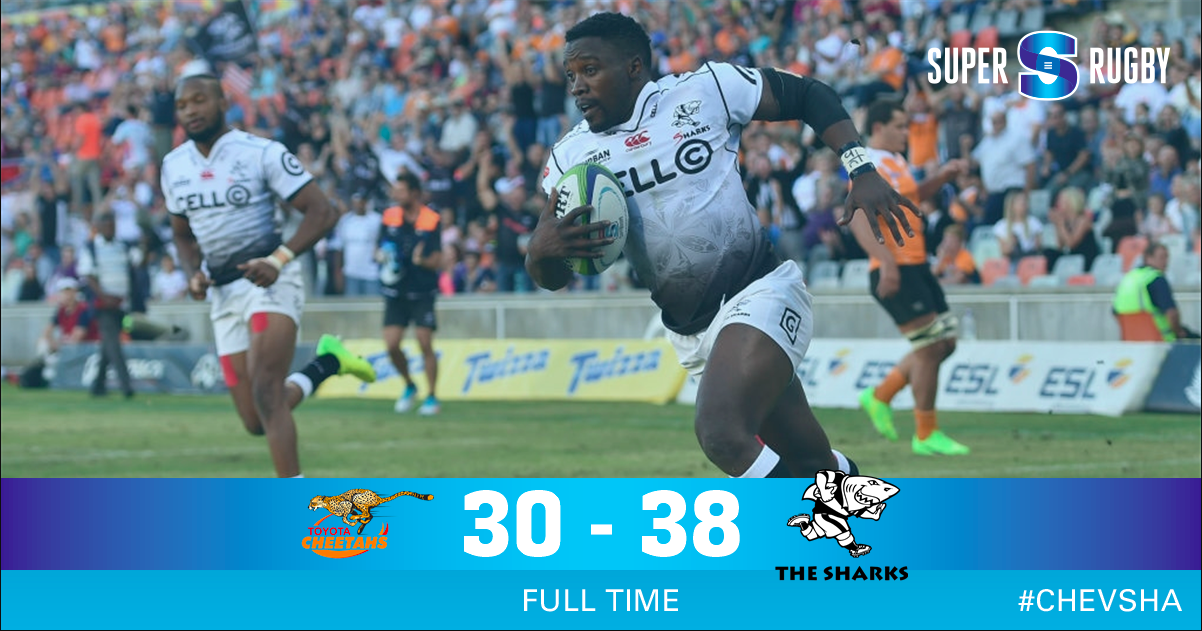