Jaguares get the better of Reds

The Jaguares retained their unbeaten home record when they claimed a 22-8 victory over the Reds in Buenos Aires on Saturday.

In a fast-paced and entertaining match, the Jaguares were full value for their win as they dominated for large periods, and they outscored the Reds by three tries to one with Jerónimo de la Fuente leading the way with a deserved brace.

The victory consolidates the Jaguares' position at the top of the Africa Conference 2 table although they have played one match more than the Lions, who are in second place.

The Reds, meanwhile, are in third place in the Australian Conference - behind the Brumbies and Waratahs - despite winning just one of their five matches so far.

The opening exchanges were evenly contested with both sides battling to gain the ascendancy but the Jaguares gained the upperhand midway through the half when Eto Nabuli and Kane Douglas were yellow carded in quick succession.

Nabuli was first to go for an intentional knock on, as ruled by the TMO in the 19th minute, and shortly afterwards Douglas received his marching orders for an obstruction at a maul.

The home side made their numerical advantage count and from the resulting scrum, Leonardo Senatore gathered before offloading to De la Fuente who dived over for his first try with a defender on his back.

Juan Martín Hernández made no mistake with the conversion and in the 28th minute the home side extended their lead thanks to a spectacular try from Ramiro Moyano.

This, after the flyer gathered a Joaquin Tuculet pass close to the Jaguares' 10-metre line and he then set off on a mazy run in which he beat seven defenders before crossing for his side's second try.

Hernández failed to convert, before the Reds eventually opened their account via a Jake McIntyre penalty in the 35th minute.

The Jaguares had their tails up, however, when Hernández added a penalty on the stroke of half-time which meant they led 15-3 at the interval.

The second half started brightly for the home side and after an extensive period camped inside the Reds half, they were rewarded when De la Fuente ran a superb angle before gathering a pass from Gonzalo Bertranou - after a driving maul inside the visitors' 22 - and he dotted down under the posts in the 49th minute.

Hernández added the extras but that would be the last time the Jaguares would score points as the Reds upped the ante on attack in a bid to gain something from this match.

They were rewarded 10 minutes later when Scott Higginbotham powered his way over the try-line in the left-hand corner, after gathering a well-weighted skip pass from Karmichael Hunt.

Five minutes later, the Jaguares were reduced to 14 men when Bautista Ezcurra was yellow carded for deliberately knocking on a pass from Samu Kerevi but the Reds failed to capitalise on their numerical advantage and the hosts held on for the win. 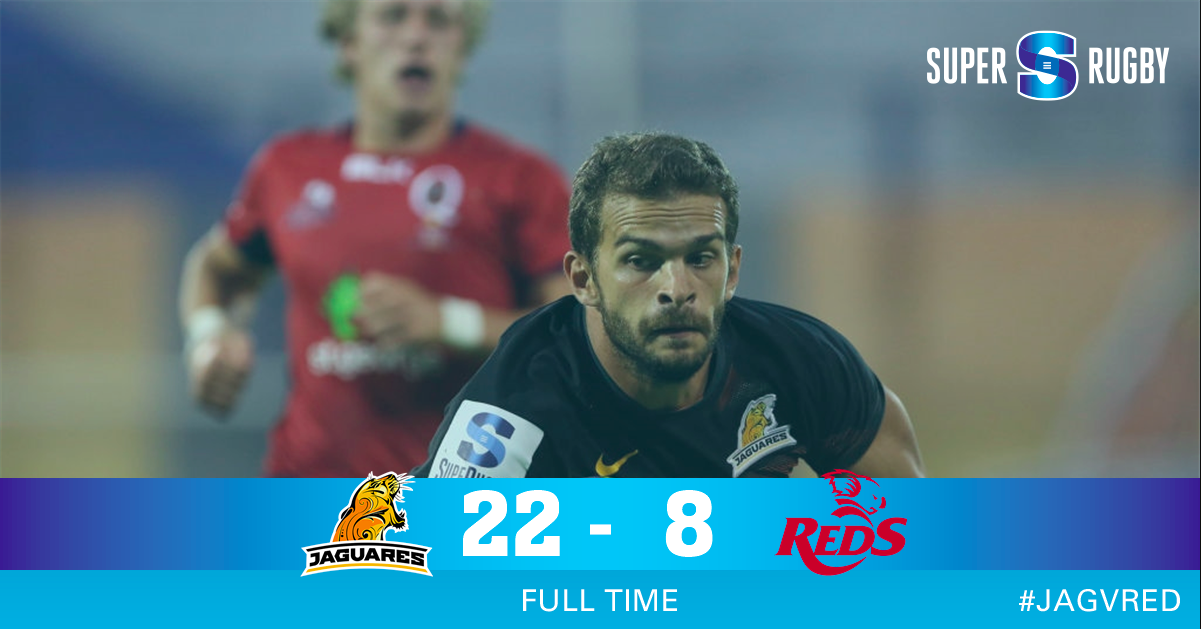