The Highlanders claimed their third win of the Super Rugby season as they were too good for the Rebels, winning 51-12 in Dunedin.

As the scoreline suggests, this was a one-sided affair and the home side were full value for their win as they outscored the Rebels by six tries to two with Malakai Fekitoa leading the way with a deserved brace.

The win moves the Highlanders into provisional fourth place on the New Zealand Conference table although that situation could change if the Blues beat the Western Force in their clash in Auckland on Saturday.

Meanwhile, the Rebels are firmly rooted at the bottom of the Australian Conference with five defeats in as many matches this season.

The visitors were under the cosh from the outset and Marty Banks gave the home side the lead in the seventh minute when he slotted a penalty after Laurie Weeks was blown up for illegal scrummaging.

Five minutes later, Richard Buckman drew in a couple of defenders inside the Rebels' 22 before throwing an inside pass to Fekitoa, who charged through a tackle from Tom English before diving over under the posts.

The Highlanders continued to dominate and shortly afterwards Luke Whitelock had an easy run-in under the posts after the ball had gone through 14 phases in the build-up.

Banks converted both those tries and five minutes later he converted his second penalty which meant the Highlanders held a comfortable 20-0 lead at half-time.

The home side extended that lead two minutes after the restart via another Banks penalty but 10 minutes later, the Rebels finally opened their account in impressive fashion.

Mitch Inman showed great vision to throw an inside pass to English just outside the Highlanders' 22, and while English still had work to do and after bursting through a gaping hole in the Highlanders' defence, he rounded a flat-footed Matt Faddes before crossing for a deserved try.

That score did not faze the home side though and they continued to dominate for the next 20 minutes and scored 21 unanswered points thanks to tries from Buckman, Gareth Evans and a Fekitoa interception score following a loose pass from the Rebels on a night full of mistakes by the visiting team. 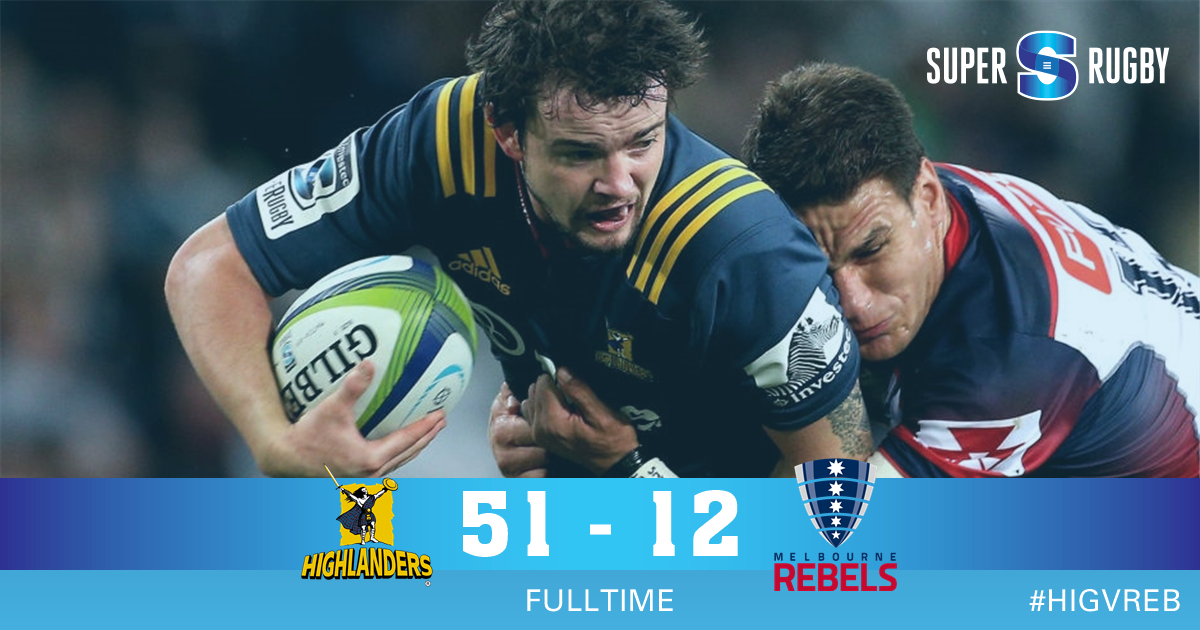 Evans' was the best of the lot as he ran onto a flat pass just outside the Rebels' 22 and showed a superb turn of speed before crashing over.

With time running out on the clock, Reece Hodge scored a consolation try for the Rebels in the 78th minute but the Highlanders were not done and would have the final say shortly afterwards.

Greg Pleasants-Tate crashed over from close quarters in injury time which also brought up a half century of points for the hosts.