The Hurricanes' class shone through to overcome a spirited Reds side 34-15 in Brisbane on Saturday.

After two early Julian Savea and TJ Perenara tries the Reds looked dead and buried until the Brisbane men fought back and scored two tries of their own through Chris Kuridrani and Scott Higginbotham. It seemed as though the Reds had enough fire to rein the Hurricanes in until a Vince Aso try took the game just out of their reach before Jordie Barrett and his brother Beauden hammered in the final nails in the Reds' coffin.

The Hurricanes owned the first twenty minutes after some quick running play that saw Savea and Perenara cross the line. First after winning the advantage they swung it out wide to Brad Shields who set it up for Savea to dive over in the corner before the scrum-half intercepted Reds fly-half Jake McIntyre's pass deep inside his own half and went all the way through to the try-line.

Full-back Jordie Barrett was given the tee and kicked both over sweetly.

It wasn't all good news for the visitors after inside centre Ngani Laumape was given a yellow card after Kerevi lost control of the ball and Beauden Barrett lept onto it. He went all the way through to the try line, but the TMO disallowed the try and Laumape was adjudged to have committed a late tackle.

The Reds would get their first points of the game after they took the ball to the Hurricanes line and spread it wide to Higginbotham who gave off an incredible offload to Kuridrani to score in the corner with McIntyre missing the posts again.

Higginbotham then set up and scored what could be the try of the season when the number eight had the ball on the right wing, turned his back to the touch line but then off loaded to Eto Nabuli through a back pass. The wing then took it up field and almost scored before sending it back inside to the number eight who touched down. McIntyre finally slotted the kick making the score 14-12 to the away side.

The 'Canes scored first in the second half after Ardie Savea made an electric break and looked as though he would score himself before being brought down just short of the line. Aso came on the inside line and the rookie winger touched down for his side's third try.

The Hurricanes looked as though they had scored again after Reds gave it everything they had to get over the line but the 'Canes turned it over and Julian Savea kicked the ball up field and Beauden Barrett gave a wide pass to Ardie Savea who then released the ball down to Aso who gave it Mark Abbott to score but the lock put his foot out and it was called off.

Their 'Canes were obviously cursed after another failed attempt when Laumape went over but they were called back for a knock on.

Perenara looked as though he eventually broke the hoodoo after the away side had a scrum on the Reds' five metre line and the nippy scrum-half broke around the fringes to dot down but the try was called off again and 'Canes would scrum again. 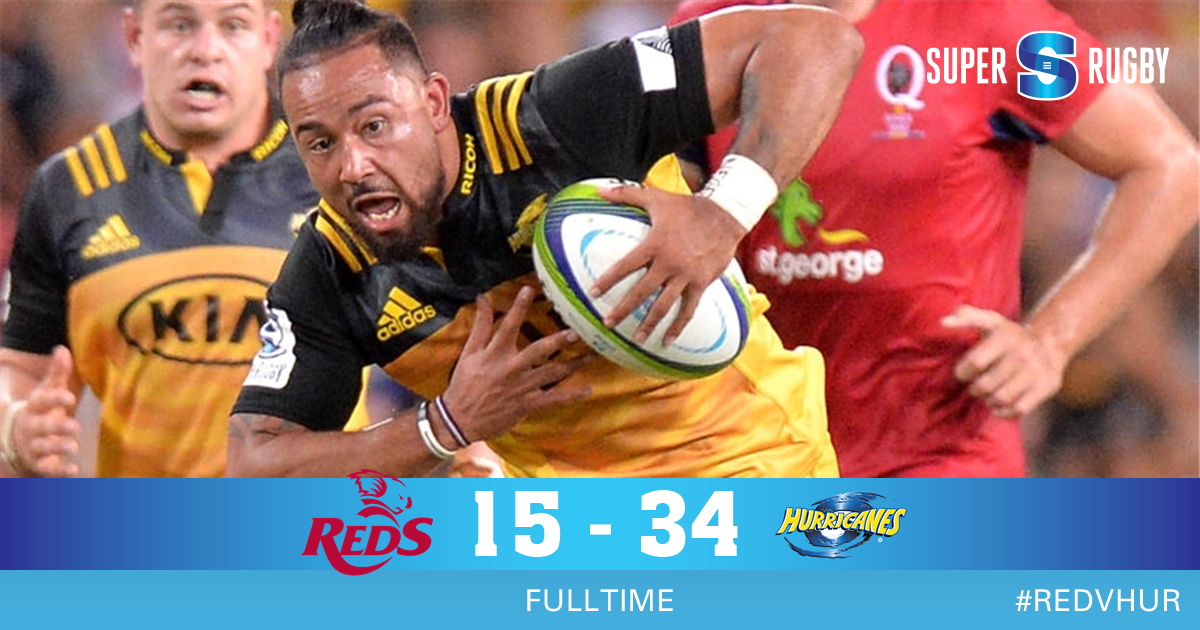 After what seemed like eternity of the Hurricanes laying siege to the Reds' line, the besieged broke free and kicked the ball into touch to finally get some breathing space.

After a sustained spell of pressure from the 'Canes, Jordie Barrett ran inside Kuridrani and dotted the ball down to score before his brother crossed for the final try of the match when Beauden Barrett received the ball running at pace to score.