The Lions moved five points clear at the Africa 2 summit after they won a thrilling clash with the Sharks 34-29 at Ellis Park on Saturday.

It was a drama-filled game in Johannesburg but a late try from Jaco Kriel proved the difference as the Lions claimed their fifth win of 2017.

Malcolm Marx and Courtnall Skosan also crossed for the hosts while Coenie Oosthuizen and Kobus van Wyk went over for the Sharks, who will feel unlucky not to take the four points with Curwin Bosch starring for them.

The Sharks would have been kicking themselves going into half-time as they let slip a ten-point lead after a late converted try brought the Lions within three. That capped a decent fightback from the Lions who in truth appeared shocked at how the Sharks took the contest to them.

Bosch was their orchestrator and he opened the scoring on three minutes with a penalty after Lions lock Andries Ferreira did not roll away.

That became 10-0 five minutes later as a great angle from wing Van Wyk 40 metres out led to him finding prop Oosthuizen who finished off.

The Lions looked shell-shocked but got themselves onto the board on 13 minutes when the Sharks had strayed offside. Jantjies did the rest.

However on 20 minutes a long-range effort from Bosch made it 13-3 before the Sharks were denied not once but twice. Firstly a penalty from Bosch struck the upright but after they managed to regather possession, Andre Esterhuizen thought he had scored on the left wing. But after the TMO intervened the visitors were denied due to an earlier clear-out from Etienne Oosthuizen which saw him make contact with the neck.

The Sharks had every right to feel upset but one man keeping his cool was Bosch as after a Jantjies penalty, the Sharks fly-half sat back in the pocket from 46 metres out to send over a sweetly struck drop-goal. Those trading of blows meant the score was 16-6 to the visitors.

Then came a late onslaught from the Lions as they capitalised on lock Oosthuizen's yellow card, with Marx powering over off the back of a driving maul to give them a major boost going into the break. The hosts would also of course start the second-half with a player advantage.

They made that count in the 44th minute when quick hands led to Skosan scrambling over on the left, with Jantjies moving them 20-16 ahead.

The Lions had their tails up at this point but maybe looked ahead of themselves when turning down a simple penalty from in front. It did not result in a try but luckily for their decision makers, full-back Coetzee's drop-goal had the distance to make it 23-16 on 52 minutes.

But the Sharks weren't done and when Van Wyk finished off on the right wing for a try converted by Bosch, suddenly the game was locked up.

With a quarter of the game to play there was more than a feeling plenty of drama was still to come at Ellis Park and it didn't disappoint.

First Bosch struck a long-range penalty following an offside on 65 minutes to nudge the Sharks 26-23 ahead. But the lead did not last long when Jantjies levelled from wide on the right. If it wasn't clear before it was now that the contest was set to go right down to the wire.

Bosch then struck a penalty from at least 65 metres out on 70 minutes but again Jantjies cancelled that out with six minutes to play, his effort from a much simpler angle and distance.

The thrills kept coming until the end though as a long-range drop goal attempt from Bosch struck the cross-bar and from the counter the Lions crossed through flanker Kriel.

The assist went to Kwagga Smith and despite Jantjies missing the extras they held on to win an epic derby. 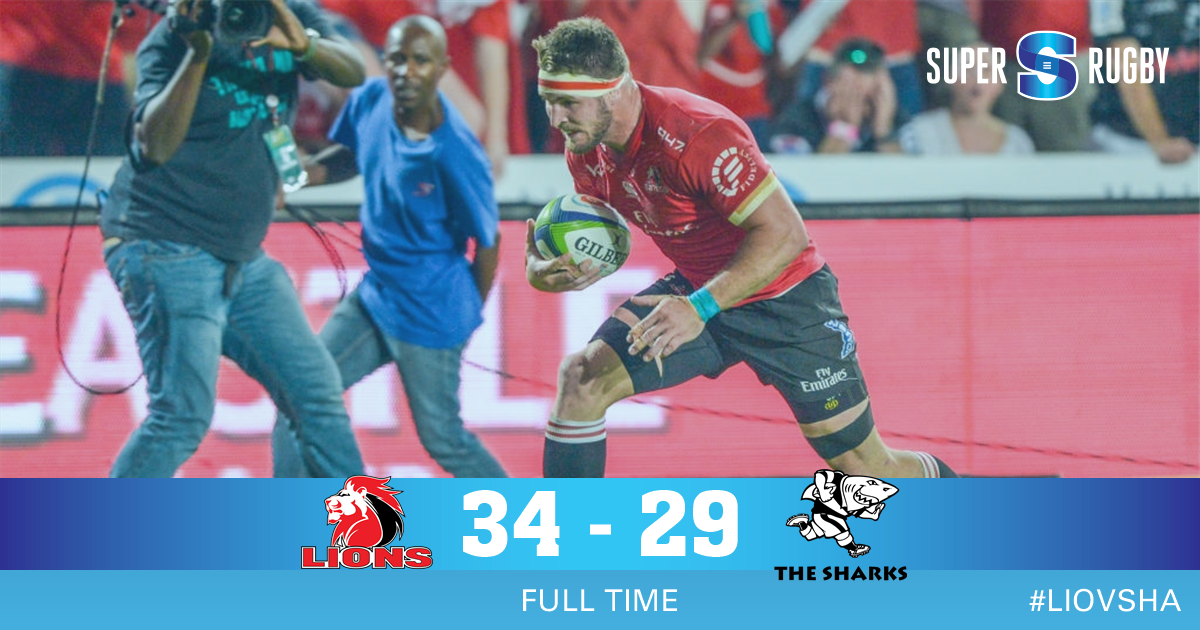