The Hurricanes moved a point behind the Crusaders at the top of the table after they beat the Waratahs 38-28 at Westpac Stadium despite a red card to Beauden Barrett..

In reply the Waratahs scored through Ned Hanigan, Bryce Hegarty, Jake Gordon and Andrew Kellaway as they suffer a fifth loss from five games this season. They will however be enthused by their second-half showing.

The champion Hurricanes flew out of the blocks and led 21-0 after just 12 minutes thanks to tries from Laumape and the Barrett brothers. The 'Tahs were all at sea and could not live with the pace the 'Canes were playing at as good decisions at speed saw the hosts cut loose.

Fortunately for the Waratahs and the game as a contest, Hanigan crossed five minutes later. just seconds after fly-half Barrett was yellow carded for a deliberate knock down. But one got the sense that Chris Boyd's side were in the mood and could strike at will in Wellington.

Barrett returned to the field and had an immediate impact when he fired a long, flat pass to Goosen on the left wing before five minutes later the Waratahs were even offering gifts to their opponent, with a sloppy line-out on their own line seeing lock Abbott dot down for 33-7.

33-7 was how it was going into the break and it felt like things were likely to get worse than better for the visitors in the second period.

That assumption proved incorrect though as the Waratahs emerged with a spring in their step, crossing twice inside the opening seven minutes as first full-back Hegarty finished off on the right wing before scrum-half Gordon spotted a gap on the fringe to go under the uprights.

But the class of the Hurricanes could not be contained for long as in broken field, Beauden Barrett sliced through a hole before finding centre Laumape on the left, who showed decent pace and power to cross. Jordie Barrett missed his first kick of the night so it was 38-21. 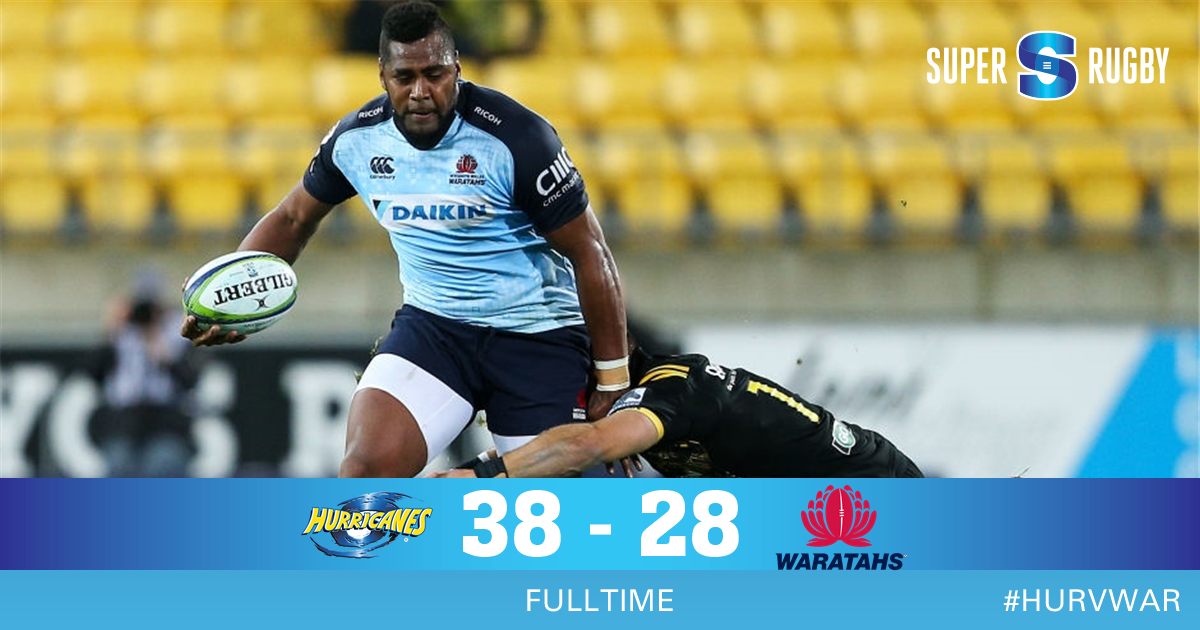 That score gave the Hurricanes back their try bonus-point but when replacement wing Kellaway was sent over by Israel Folau on 70 minutes, the maximum was again chalked off, meaning the home outfit had to raise their game once again if they were to go joint top of the table.

It wasn't to be for the Hurricanes as in fact the 'Tahs were the ones on top during the closing stages, with only a deliberate slap-down from Barrett halting them from making it try number five. That offence from the pivot meant he was given a red card for a second yellow but the Hurricanes held on in the aftermath, settling for four points that takes them up to second in their Conference.