The Sunwolves claimed their first win of the Super Rugby season with a thrilling 21-20 comeback victory over the Bulls in Tokyo.

In a topsy-turvy match in which the lead changed hands several times, both sides crossed for two tries but the Sunwolves deserved this win as they made better use of their pointscoring opportunities, especially during the game's latter stages.

The win means the Sunwolves moves level with the Bulls at the bottom of the Africa Conference 1 table – 17 points adrift of the Stormers who are in first place although the Cape Town-based side could extend that lead if they beat the Chiefs later on Saturday.

The Sunwolves were fastest out of the blocks and spent most of the opening quarter camped inside the Bulls' half.

They were rewarded as early as the sixth minute when Rahboni Warren Vosayaco shrugged off a poor challenge from Adriaan Strauss before diving over in the left-hand corner after Timothy Lafaele laid the groundwork with a powerful run in the build-up.

Hayden Cripps failed to convert but added a penalty in the 11th minute which gave his side an 8-0 lead.

It did not take long for the Bulls to respond though and they did it in style when Burger Odendaal gathered the ball on the Sunwolves' 10-metre line and set off on a mazy run – in which he beat three defenders – before diving over under the posts.

Tian Schoeman added the extras before Cripps succeded with his second penalty in the 24th minute but another three-pointer from Schoeman off the kicking tee two minutes later meant the Sunwolves led 11-10 at half-time.

The Bulls took the lead for the first time, 10 minutes after the restart when Schoeman slotted his second penalty and the next 15 minutes was an attritional affair as both sides tried to take control of proceedings.

The visitors eventually extended their lead when Travis Ismaiel showed great footwork and determination down the right-hand touchline before crossing over in the right-hand corner. 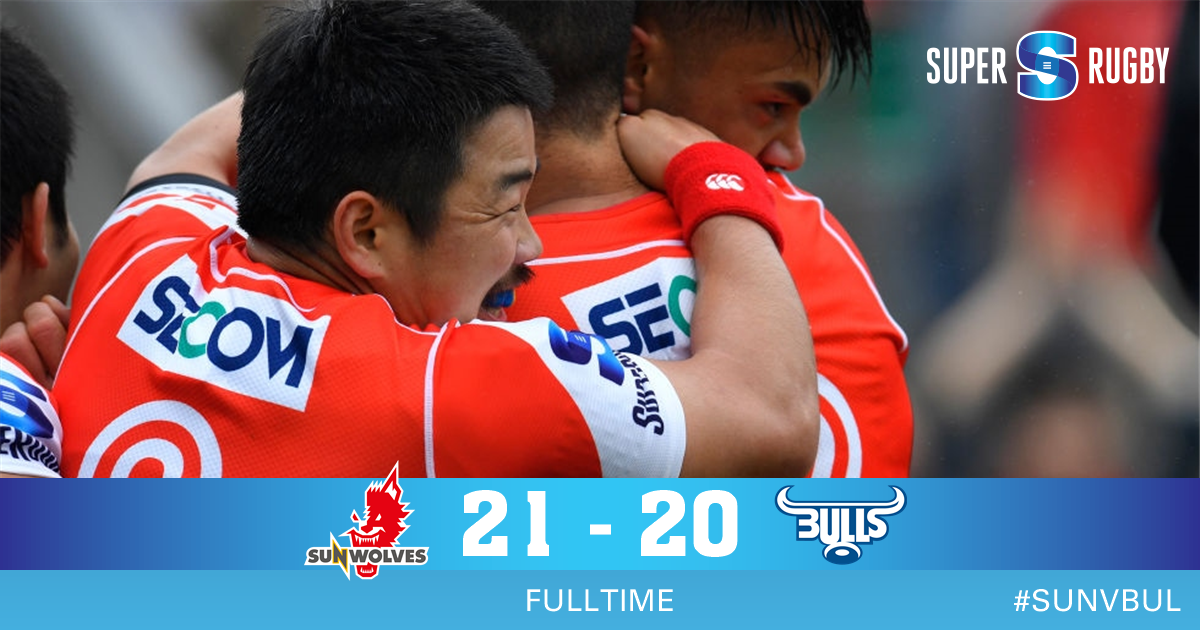 Schoeman did well to land the conversion from close to the touchline which meant the Bulls led 20-11 with time running out on the clock.

However, things went pear-shaped for the visitors five minutes later when Jan Serfontein was yellow carded for slowing the ball down cynically at a ruck close to his try-line.

The Sunwolves made full use of their numerical advantage and shortly afterwards Takaaki Nakazuru rounded off a flowing move. Yu Tamura converted which narrowed the gap to a point and the replacement back added a penalty five minutes later which proved to be the matchwinning points.

The Bulls had a chance to steal the result two minutes before the end but Francois Brummer's penalty attempt was off target.