The Crusaders made it seven wins from seven in 2017 when they cruised to a deserved eight-try 50-3 victory over the Sunwolves in Christchurch.

The seven-time champions had little trouble in seeing off the men from the far East, who looked a pale shadow of the side which beat the Bulls in Tokyo last week and the Crusaders eventually outscored them by eight tries to none with Manasa Mataele leading the way with a deserved hat-trick.

The win means the Crusaders have consolidated their position at the top of the New Zealand Conference table although the Hurricanes and Chiefs can narrow the gap if they beat the Blues and Cheetahs respectively on Saturday.

The Sunwolves, meanwhile are still languishing at the bottom of the Africa 1 Conference standings, one point adrift of the Bulls who take on the Jaguares on Saturday.

As expected, the Crusaders dominated from the outset although it took them some time to get going as wet weather made handling and underfoot conditions difficult.

This meant the opening exchanges were scrappy and the home side had to wait until the 14th minute to take the lead – Kieran Read marking his return with a trademark try from close quarters at a ruck deep inside the Sunwolves' 22.

The hosts continued to dominate but committed several handling errors but were eventually rewarded 10 minutes later when Ben Funnell scored their second try after planting the ball against the face of the Sunwolves' post.

The Crusaders suffered a setback in the 25th minute when Seta Tamanivalu was yellow carded for taking Teruya Goto out illegally in an aerial challenge midway between the Sunwolves' 10-metre line and the halfway mark.

Shortly afterwards, the visitors opened their account via a Yu Tamara penalty but Tamanivalu's sending off did not affect the Crusaders adversely as they scored two tries during this period.

Mataele soon had his hat-trick after the ball went through several pairs of hands in the build-up and the Crusaders went in to the sheds at half-time holding a comfortable 29-3 lead. 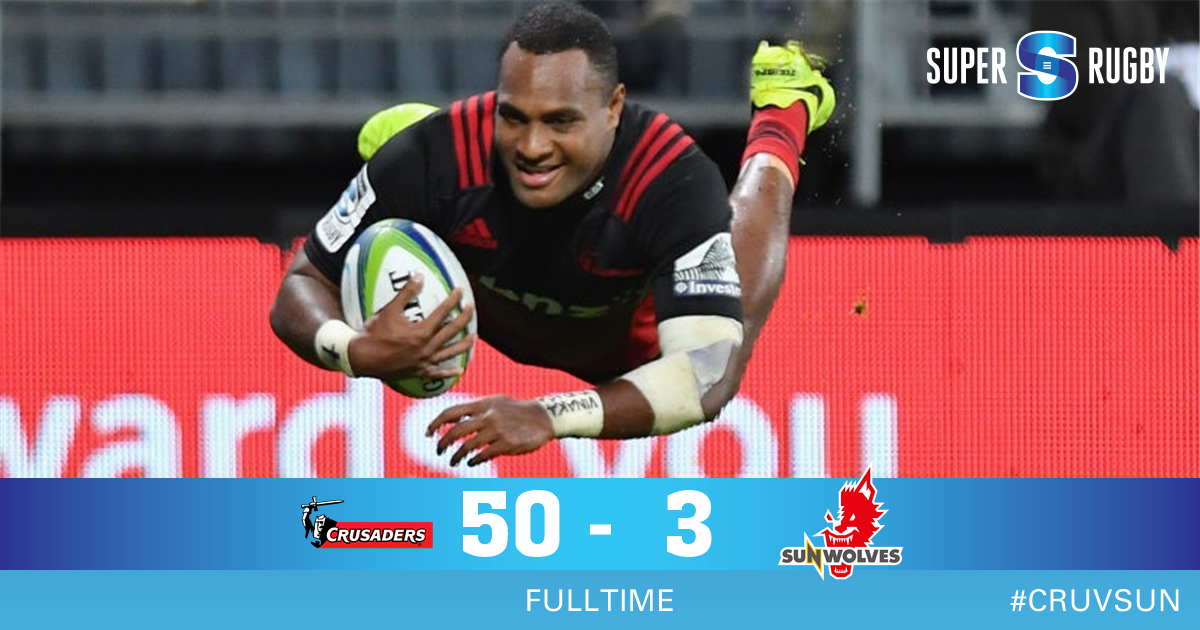 The Crusaders continued to dominate in the second half and five minutes after the restart Pete Samu – who was superb throughout – crossed for their sixth try after Mitchell Drummond and Read laid the groundwork in the build-up.

The home side upped the ante on attack and were rewarded again when Richie Mo'unga delivered a smart kick ahead which George Bridge gathered before sliding over for a deserved five-pointer.

And on the hour-mark, Whetu Douglas completed the rout with his side's eighth try and Marty McKenzie added the extras which notched his side's half century of points.

With the game in the bag, the Crusaders took their foot off the pedal but this result proved that it will take a special effort to hand them their first loss of the season.