Reds too good for spirited Kings

The Reds got their campaign back on track when they claimed a deserved 47-34 victory over the Kings in Brisbane on Saturday.

Both sides deserve credit for making this the entertaining spectacle that it was although the Reds got the rub of the green in the end and outscored their visitors by seven tries to five with Eto Nabuli, Karmichael Hunt and Izaia Perese all scoring a brace.

The match was also a memorable one for Wallaby legend George Smith, who scored a try for the Reds in his 150th Super Rugby match.

The win moves the Reds provisionally into second place on the Australian Conference table although that situation could change when the Rebels and Brumbies meet later on Saturday.

The Kings, meanwhile, are still at the bottom of the Africa 2 Conference standings.

The Reds did most of the attacking during the opening exchanges and spent the first 10 minutes camped inside the Kings' 22. They opened the scoring as early as the fifth minute when Eto Nabuli found himself in space down the right-hand touchline before powering his way over for a deserved try.

Quade Cooper added the extras but the Reds could not build on that early lead.

The Kings set up several phases of attack inside the Reds' half and were rewarded in the 22nd minute when Chris Cloete scored their first try after gathering a perfectly-weighted Masixole Banda grubber kick.

Five minutes later, the Reds cancelled out that effort when Hunt ran a good angle close to the visitors' try-line before diving over for his first try.

The home side were dealt a blow three minutes before the interval when Duncan Paia’aua was sent to the sin bin for an illegal tackle on Luzuko Vulindlu. Lionel Cronje slotted the resulting penalty which meant the Reds held a slender 14-10 lead at half-time.

The Reds made a superb start to the second half when, from a line-out on the edge of the Kings' 22, they launched an attack and George Smith and Scott Higginbotham traded passes before Smith went over the whitewash despite the attentions of Yaw Penxe and Mzwanele Zito.

Quade Cooper added the extras which meant there was some breathing space for the Reds as they now held an 11-point lead.

The Kings did not take that lying down and five minutes later, Louis Schreuder barged over from close quarters at a ruck deep inside the Reds' 22.

The hosts did not take that lying down and Hunt soon had his second try after Cooper did well in the build-up with a superb grubber kick. The Reds upped the ante on attack and secured the win with two tries from Perese, within the next five minutes, which meant they led 47-17 by the hour-mark.

The Kings fought back, however, and scored three further tries in the game's final quarter although they were also reduced to 14 men when Wandile Mjekevu was yellow card for kneeing Cooper in the back in an off-the-ball scuffle in the 69th minutr.

Makazole Mapimpi scored two of those tries and Masixole Banda got the other with Mapimpi's first one, his side's best of the night as he bamboozled the Reds defence with dazzling footwork before crossing the whitewash. 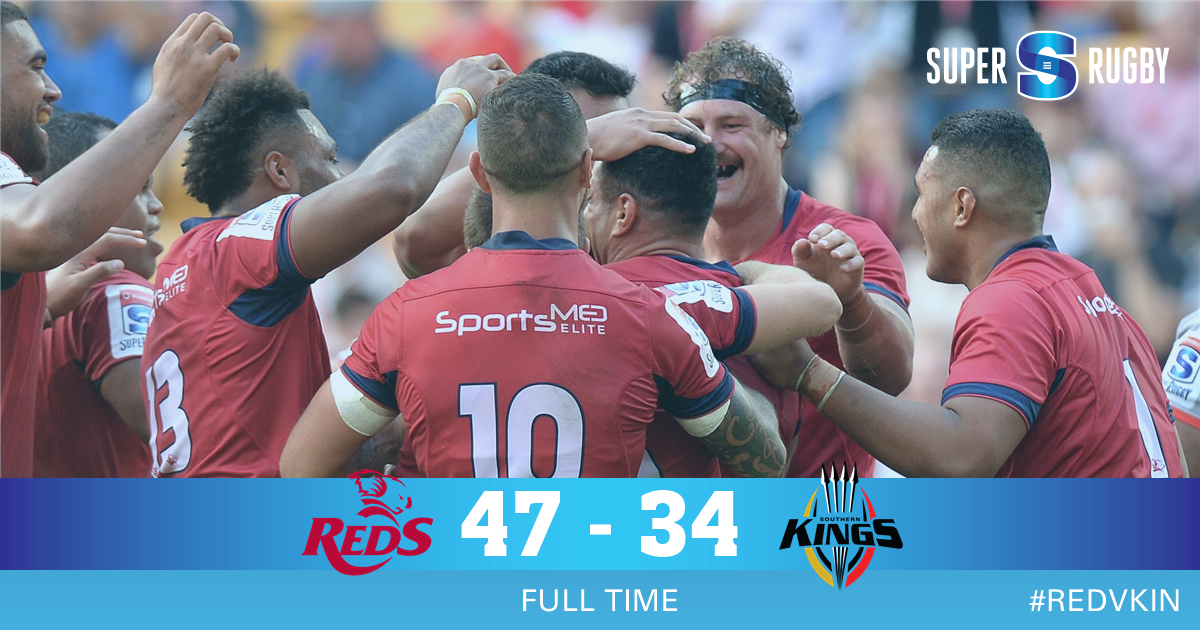