A late try from Mark Abbott secured a 28-24 win for the Hurricanes over the Blues in a thrilling contest in Auckland on Saturday.

In what has become the norm between two New Zealand sides in this competition, this was another superb encounter with both teams staying true to their attacking roots throughout.

In the end, the champions outscored their hosts by four tries to three with Abbott leading the way with a deserved brace.

The result means the Hurricanes close the gap on the Crusaders at the top of the New Zealand Conference while the Blues are still languishing at the bottom despite claiming a losing bonus point.

The Hurricanes made a terrific start and after Beauden Barrett drew in several defenders with a superb run early on, Mark Abbott spotted a gap at a ruck close to the Blues' try-line before crashing over for the opening try.

Jordie Barrett slotted the conversion but it did not take long for the Blues to reply. And they did it in style thanks to brilliant interplay between Augustine Pulu and Melani Nanai.

Pulu got a pass out to Nanai on the edge of the Hurricanes' 22 and flyer set off towards the visitors' try-line. He still had work to do and sold TJ Perenara an outrageous dummy before offloading to Pulu who dotted down.

It did not take long for current World Rugby Player of the Year Beauden Barrett to leave his stamp on this match and he did by setting up a try for Ngani Laumape in the 15th minute.

Barrett did this with a superb line break from close to his 10-metre line and he did well to draw in a couple of defenders just outside the Blues' 22 before offloading to the on-rushing Laumape who scored next to the posts.

It did not take long for the Blues to reply though and once again Nanai was heavily involved. Steven Luatua laid the groundwork with a bustling run in the build-up before offloading to Nanai who outpaced the cover defence before crossing the whitewash.

The Hurricanes regained the lead when they pounced on a Sonny Bill Willams error after a line-out just inside the Blues' half. Williams knocked on a pass from Pulu before Beauden Barrett kicked the ball upfield. He regathered and outsprinted three chasers and crossed for his side's second try.

Williams made up for that mistake shortly afterwards when he broke open the Hurricanes defence with a powerful run before Perenara brought him to ground deep inside the visitors' 22.

At the ensuing ruck, Beauden Barrett deliberately slapped the ball out of Pulu's hands and was sent to the sin bin for his indiscretion.

That was 10 minutes before the interval but although the Blues stepped up a few gears on attack, they could not score any points during this period and the Hurricanes led 21-14 at half-time.

The second half was a more measured affair and although the Blues improved as the half progressed, the Hurricanes showed why they are the champions as they finished stronger.

Blues head coach Tana Umaga deserves credit for his decision to bring on rookie fly-half Bryn Gatland and scrum-half Billy Guyton with 30 minutes left on the clock and the duo's introduction helped the Blues to take control of proceedings shortly afterwards.

Gatland narrowed the gap with a penalty shortly after coming onto the field and 10 minutes later, the Blues took the lead for the first time when Scott Scrafton burrowed his way over the try-line after Jerome Kaino and Matt Moulds laid the groundwork with strong carries in the build-up.

That score saw seemed to rejuvenate the Hurricanes who launched several attacks from deep inside their half in a bid to regain the lead. That approach reaped reward in the 75th minute when - after taking the ball through umpteen phases in the build-up - Abbott gathered at a ruck before crossing the whitewash for the matchwinning try. 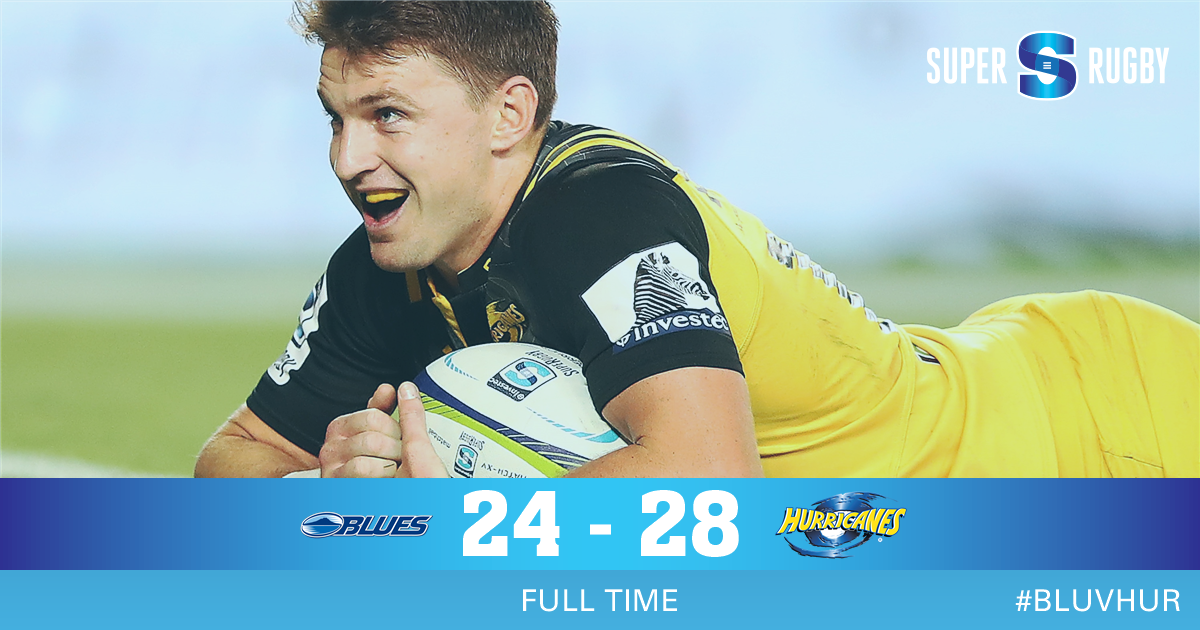