The Rebels claimed their first Super Rugby win of the season when they beat the Brumbies 19-17 in Melbourne on Saturday.

As the scoreline suggests, this was a hard-fought encounter and the Rebels secured the result thanks to a late penalty from Reece Hodge.

The Rebels will breathe a huge sigh of relief as poor discipline nearly cost them this match after Colby Fainga’a, Lopeti Timani and Fereti Sa’aga were all yellow carded.

The opening exchanges were evenly contested but the home side held a slight edge and eventually took the lead courtesy of a Hodge penalty in the 10th minute.

Three minutes later, the game came alive thanks to a moment of magic from Sefa Naivalu. The Wallaby flyer showed his class when he set off on a mazy run and shrugged off the attentions of five defenders before crossing for the opening try.

Hodge added the extras which meant the home side had their tails up with the score at 10-0. The Rebels lost the initiative shortly afterwards when their flankers Fainga’a and Timani were sent to the sin bin for foul play.

Fainga’a was yellow carded for a tip-tackle on Sam Carter and Timani received his marching orders after he kneed Rory Arnold in the head at the ensuing ruck.

With a two man advantage, the Brumbies soon opened their account when Henry Speight got over for a try after Jarrad Butler did well by with a brilliant dummy in the build-up before offloading to the Wallaby flyer.

And although this was the only points scored during Fainga’a and Timani's spell on the sidelines, the visitors scored their second try in the 32nd minute when Butler dotted down after a powerful scrum from the Brumbies close to the Rebels' try-line.

Hodge added a penalty five minutes later which meant the game was evenly poised with the Rebels leading 13-12 at half-time.

The hosts suffered a setback early in the second half,however, when Sa’aga was sent to the sin bin for a cynical foul on defence close to his try-line and like those previous yellow cards, the Brumbies punished them with another Speight try.

This after he ran onto a pass from Joe Powell at the ensuing scrum and beat Marika Koroibete before crossing the whitewash. That was the last time the two-time champions scored points as the rest of the match turned into an arm wrestle with both sides trying to secure the result.

The Rebels narrowed the gap to a point on the hour-mark when Hodge landed a longe range penalty and although the Brumbies tried gallantly to seal the win, the home side kept them at bay with a solid defensive effort.

That defence proved crucial as two minutes before full-time Hodge slotted his fourth three-pointer from the kicking tee which secured his team their maiden win of the season at their sixth attempt. 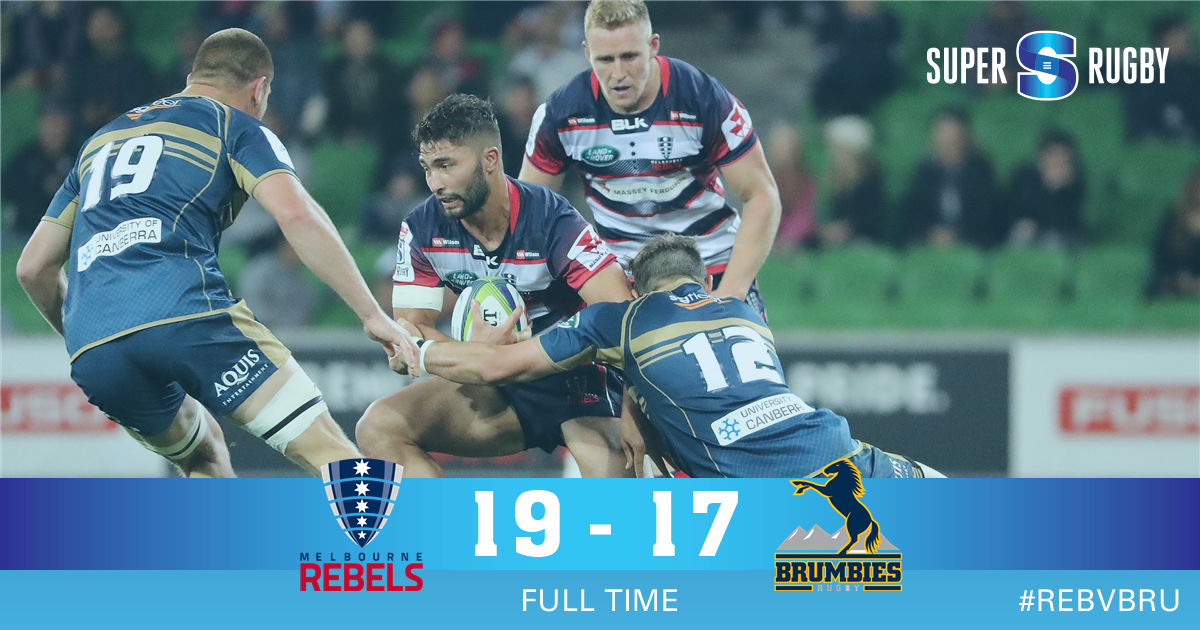