A blistering comeback from the Chiefs ensured they emerged 41-27 victors over the Cheetahs in Bloemfontein on Saturday.

The result means the Chiefs remain very much in the mix in the New Zealand conference standings, while the Cheetahs sit in second place in the Africa 1 conference temporarily, depending on the Bulls result.

The Cheetahs will be kicking themselves after surging into a 24-0 lead and going into half-time at 24-14. However, a dismal second-half display meant they only scored a further three points to the Chiefs' 27.

The Chiefs began the game conceding far too many penalties mainly because their try-line was under serious threat from the home side.

It was the Cheetahs who surged into a 24-0 lead in the first quarter of the match before the visitors had even managed to settle in, capitalising on their territorial advantage and dominance of possession.

Raymond Rhule opened the scoring after being put into space from scrum-half Shaun Venter. Rhule cleverly spotted the mismatch and coasted past the outside of Chiefs prop Kane Hames to dot down in the 10th minute. Niel Marais converted to make the score 10-0 after 10 minutes.

Marais then put Clayton Blommetjies into space who showed incredible vision with his superb offload setting Torsten van Jaarsveld on an unstoppable angled run over the white chalk. Marais converted again to make it 17-0.

The next Cheetahs try actually came from a Chiefs penalty. After Oupa Mohoje had turned over the ball for the hosts, Blommetjies in fine creative form, beat two tacklers and offloaded to the captain Francois Venter who took a few steps and planted it between the sticks in the 20th minute.

The Chiefs, desperate to respond, after an embarassing opening stanza, then camped inside of the Cheetahs' half for a good eight minutes before their persistence was finally rewarded with a try. From the five-metre scrum, they went to the short-side and good hands from Tawera Kerr-Barlow and Liam Messam meant Toni Pulu just got over in the corner, avoiding the touchline by inches.

Brodie Retalick then secured the ball from a five-metre lineout and offloaded to Sam Cane whose direct running pierced through the backtracking Cheetahs defence. He was brought down just before the try-line. But a quick pick-up and go from Pulu ensured he dotted down in what was great set-piece rugby from the visitors that looked like it came straight off the training ground.

The Chiefs started the second-half much like the first conceding way too many penalties. They were eventually penalised by referee Jaco Van Heerden when prop Hames was sent to the sin-bin for collapsing the maul. Marais put the penalty between the posts to extend the lead to 27-14.

His opposite number Aaron Cruden responded immediately with a penalty of his own to bring the deficit back to just 10.

And then, in the try of the match and despite still having 14 men, the Chiefs' counter-attacking extraordinaire Damian McKenzie once again sparked off the move that led to Kerr-Barlow's touch-down, just as he had done in the last match against the Stormers.

After beating a few players, McKenzie got one too many Cheetahs players to commit to him before cleverly putting Sam McNicol into space, whose final offload found Kerr-Barlow who had a simple finish to execute with an empty try-line in front of him.

The Chiefs completed their comeback courtesy of supreme creator McKenzie once again. The 21-year-old instinctively knows where the space is and this time it was James Lowe who benefited, who had only a few metres to run before he dropped on top of the ball. It was wonderfully controlled possession and elusive running from the Waikato side who had taken the ball through eight phases. Cruden then put a kick over from a tight angle to put his side into the lead at 29-27.

The next two Chiefs tries came purely from Cheetahs errors. The first came after Fred Zeilinga, on as a substitute for Marais, missed a crucial penalty. From the restart, Cruden kicked to the Cheetahs forwards but Henco Venter lost his footing, allowing substitute winger Shaun Stevenson a free run to the line to dot down in the 72nd minute.

The second try was even more diabolical in defensive terms. The Cheetahs get the ball at their 22 after a kick forward but are driven back to their five-metre. They lost it and Hika Elliot was the man who took advantage of the mistake, going over the line to score the try in the 76th minute and ultimately put the nail in the Cheetahs' coffin. 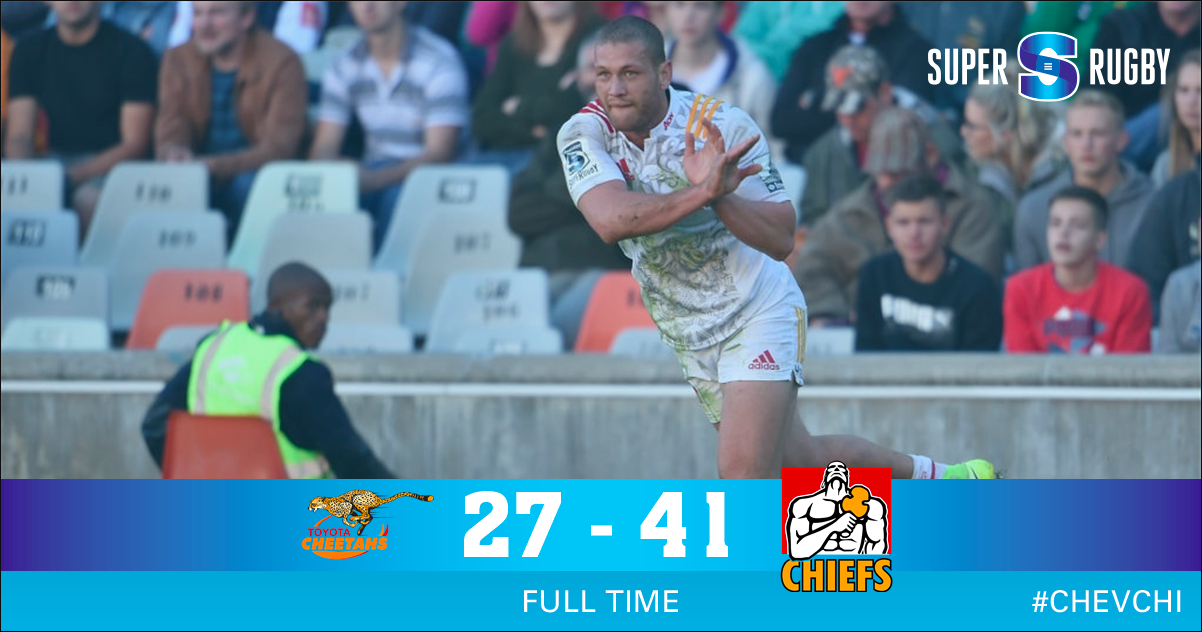