Eight converted tries from the Hurricanes ensured a comprehensive 56-21 win over the Brumbies in Hamilton on Friday.

Outside centre Vince Aso finished with a hat-trick to move clear at the top of the standings as the Hurricanes came from behind at half-time to register an emphatic victory.

Coming off a shock loss to the Rebels the Brumbies looked to have found their feet and despite going down 14-0 surprisingly led 21-14 at the break, with an upset not off the table.

They failed to score a single point however in the second half as the Hurricanes ran riot, with Beauden Barrett in top form once again to secure a bonus-point win.

The Hurricanes' sustained dominance in the first five minutes paid off in the sixth minute when Aso scored a try running from his own half with no Brumbies' players able to get their hands on him.

It was pure counter-attacking play from the Canes, as Beauden Barrett made a decoy run bringing three defenders with him before passing inside to Aso, who scooted past a number of mismatches before dotting down. It all started from a penalty when the Canes absolutely destroyed a Brumbies scrum, a clear statement this early in the game. Jordie Barrett added the extras to give the Canes a 7-0 lead.

The second try came soon after in the 12th minute. After taking the ball through six phases ,looking after the ball well and building pressure, Beauden Barrett was then able to put a beautiful cross-field kick onto the right wing which Cory Jane showing great timing of the jump to grab the ball before going over the try-line for his side's second. Jordie Barrett secured the extras to make it 14-0.

At this stage, the Brumbies, despite building phases, were unable to gain any real front-foot momentum, struggling to get out of their own half due to resolute Canes defence and some sloppy passing from the Brumbies.

The Brumbies finally got out of their half and were starting to produce some good rugby. Tevita Kuridrani broke the line before delivering a wonderful offload to Barrett before sending a kick for his runners to chase that unfortunately just rolled out-of-bounds despite the desparing dive of scrum-half Joe Powell.

Despite the Canes' early surge, the game was quite even in the first quarter, with both sides enjoying more than seven phases three times, which made for good watching.

The Brumbies' improved rugby and pressure paid off when they won a lineout on the 15 metre line. A well-worked set-piece move resulted in Joe Powell confusing the Canes' defence when his inside ball found Nic Mayhew who ran a great line, bursting through two tackles before offloading to Tevita Kuridrani who got over. Wharenui Hawera struck the ball between the poles to halve the deficit at 14-7.

From the resulting kick-off, Henry Speight collected the ball, stepped a few players before sending a wonderfully-weighted grubber downfield, which Beauden Barrett managed to put out of play, albeit five metres out. The Brumbies, however, were rewarded with a five-metre lineout and a chance of equalling the match.

And equal the match they did. From the lineout, it was up to the forwards after Soeight initially did great work. The big forwards took the ball through over ten phases with an advantage and Sam Carter eventually got over. Hawera added the extras to make it 14-14.

The visitors followed that up with one of the tries of the season and their third in a remarkable seven minutes. Aidan Toua sparked the move, leaving one defender for dead, but after that it was almost every player involved from forwards to back as the Brumbies showed beautiful ball retention, passing at just the right moments before Joe Powell dotted down under the post.

Three tries for the Brumbies in a thrilling seven minutes meant the Brumbies went into the break with a 21-14 lead over the Hurricanes.

The second half started much the same way as the first, with the Hurricanes dominating territory and pushing for a try. Wharenui Hawera was yellow-carded for cynical play at the breakdown area.

The Hurricanes capitalized on theur numerical advantage when Beauden Barrett once again produced a beautiful cross-field kick to Blade Thomson, who quickly put a inside ball for Aso to race through and dot down for his second of the game in the 47th minute. Jordie Barrett slotted the conversion, to equal the score at 21-21.

A scrum on the Brumbies' five-metre line was caused by sustained Canes pressure. Good fron-foot ball sent Beauden Barrett on one of his mazy runs and his exquisite offload put Aso into space to run through for his hat-trick try. Jordie Barrett calmy converted to make it 28-21 to the Canes.

The next try for the Chiefs came from a poor Brumbies error. The Brumbies made a hash of a lineout on their ten metre line. They won the lineout but after Powell spread the ball to Hawera, the fly-half's poor kick was charged down by Hurricanes substitute Callum Gibbins who ran onto the ball and dotted down in the 60th minute. Jordie Barrett once again converted to ensure a 35-21 lead for the Chiefs.

The next try for the Chiefs was more up to hard work. Their tireless forwards took the ball through numerous phases, showing
great ball retention. Eventually, TJ Perenara spread the ball to the blindside for lock Mark Abbott to bustle over in the 64th minute. Barrett added the extras to make it 42-21.

The second-half continued to be one way traffic as the Brumbies' careless kicking allowed the men from Hamilton to launch one counter-attack after another.

Every time, the away side tried to get out of their half, they were immediately pegged back in by the clever Canes. Callum Gibbins got his second of the game and his teams' seventh which Jordie Barrett converted to make the score 49-21.

This time Gibbins profited from a strong rolling-maul from his fellow forwards and fell over the ball on the try-line.

The Hurricanes' eighth try came from another great cross-field kick from Beauden Barrett to Ngani Laumape who had a free run-in to the try-line.

This was Barrett's third cross-kick resulting in a try in just this game. This made the score 56-21 after an Otere Black conversion.

The Hurricanes scored 42 unanswered points in the second-half to completely dismantle any hopes the Brumbies had and won 56-21. 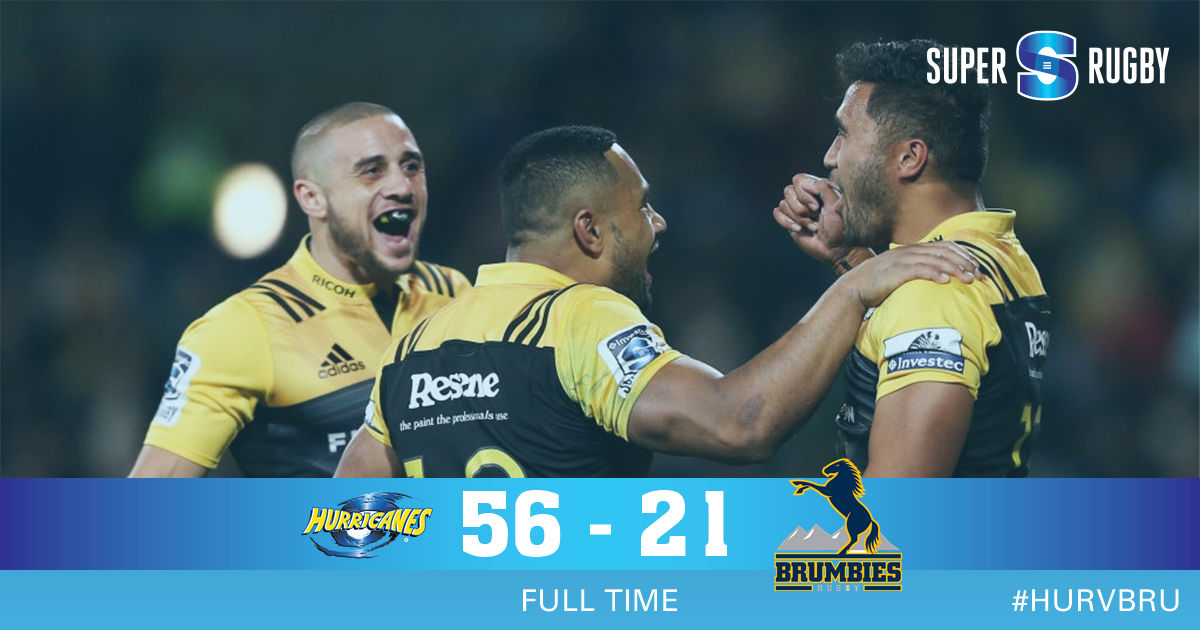