Bulls fight back to edge Cheetahs

The Bulls' recent resurgence continued when they claimed a 20-14 victory over the Cheetahs in their South African derby in Pretoria on Saturday.

In a tightly contested encounter, the visitors were in control of proceedings for large periods but poor finishing cost them dearly and the Bulls eventually outscored them by two tries to one with a late Jesse Kriel try sealing their win.

The result means the Bulls narrow the gap on the Stormers at the top of the Africa 1 Conference table. They are now 12 points adrift of the men from the Cape in the standings while the Cheetahs are four points behind them in third place.

The Cheetahs were the dominant side during the opening quarter and opened the scoring as early as the fifth minute when Paul Schoeman powered his way over the tryline after a line-out drive deep inside the Bulls' 22.

Niel Marais failed with the conversion attempt but added a penalty three minutes later after Hanro Liebenberg infringed at a ruck.

The visitors continued to attack and ran the ball at every opportunity but could not extend their lead. The Bulls were slowly getting into the game as the half progressed and Tian Schoeman opened their account in the 25th minute via a penalty.

The rest of the half was a tight affair as both sides tried to gain the ascendancy but the only other points of the half was another Marais penalty in the 33rd minute which meant the Cheetahs held an 11-3 lead at the interval.

Like the first half, the Cheetahs were the dominant side after the restart but despite holding the upperhand during the first 10 minutes of the second half, they could not add to their points tally during this period.

That came back to haunt them as three minutes later the Bulls narrowed the gap when Jacques Potgieter burst over from close quarters after the ball went through several phases in the build-up.

Schoeman added the extras which meant the Bulls were trailing by a point but the Cheetahs extended their lead when Marais added his third penalty in the 62nd minute.

The Bulls upped the ante on attack and ran the ball from all areas of the field and were soon rewarded. In the 73rd minute, they won a crucial turnover and Warrick Gelant launched a counter attack from inside his half.

Jamba Ulengo then took the ball into contact but managed to free his arms and offloaded to Burger Odendaal who set off towards the try-line. He got a pass out to Kriel who stepped inside a couple of defenders before dotting down under the posts.

Schoeman added the extras and although the Cheetahs tried gallantly to claw their way back, they were kept at bay by a solid defensive effort from the Bulls. 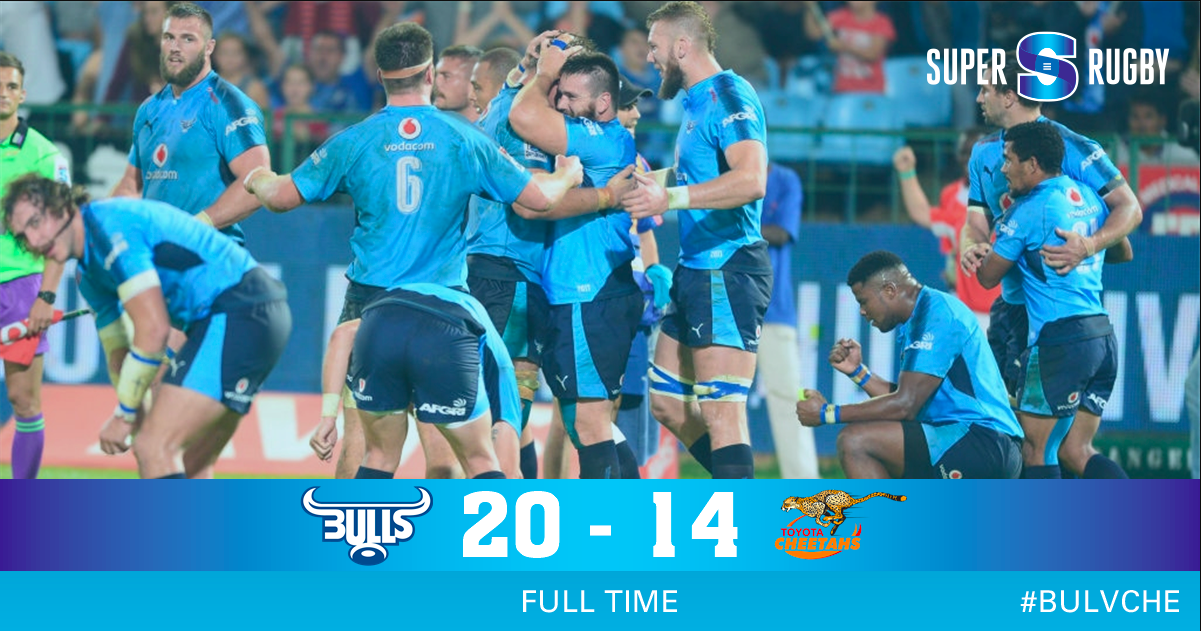