The Sharks and Rebels each had a player sent off on Saturday as they played out a 9-9 draw in their Super Rugby clash in Durban.

Despite having inside centre Andre Esterhuizen red carded early on for a dangerous tackle, the Sharks looked to be heading to the four points.

But Reece Hodge struck late for the Rebels, who would also finish a player down after Nic Stirzaker was given a second yellow on 70 minutes.

The game was disappointing from start to finish for the Sharks, who lost winger Kobus van Wyk to injury during the warm-up at Kings Park.

Despite the Rebels having scrum-half Stirzaker yellow carded for a deliberate knock-on on four minutes, they could not assert any real dominance on their visitors, who in fact went ahead three minutes later when Hodge slotted from range after Etienne Oosthuizen's side entry.

The Sharks responded well and thought they'd crossed when Tendai Mtawarira barged over on 14 minutes. But replays showed he was held up.

Still 0-3 down, the Sharks were then dealt a significant blow when centre Esterhuizen was red carded for lifting then dropping Rebels wing Sefa Naivalu on his head. That meant the Durban franchise would have to see out the remaining 63 minutes with only 14 players on the field.

The Rebels didn't exactly dominate though and when Curwin Bosch levelled matters on 25 minutes one sensed they would not be brushed aside despite their numerical disadvantage. Only a second Hodge penalty troubled the scorers before the break, this after lock Oosthuizen's ruck offence.

After the break the Sharks' night did not get much better as following Rebels tighthead prop Tyrel Lomax being penalised at a scrum, fly-half Bosch hit the upright with his subsequent attempt off the tee. And their luck wasn't about to change as more headaches would follow.

On 51 minutes the Sharks should have levelled but instead opted for the corner, with Rebels hooker James Hanson sin-binned soon after for collapsing a maul. Cobus Reinach was then denied a try due to Ruan Botha grabbing an opponent around the neck as the Rebels stayed ahead. It was looking more and more like not being the Sharks' evening.

That changed on 64 minutes as finally the Sharks decided to settle on points, with Bosch levelling the contest at 6-6 with a solid strike.

The momentum was now solely with the Sharks and when Rebels scrum-half Stirzaker was shown a second yellow card by referee Marius van der Westhuizen it was 14 against 14, with the home side pressing to take the lead with just ten minutes remaining.

That they did with two minutes to play, through Bosch again, but a costly infringement barely a minute later saw Hodge step up to level as the two teams shared the points in a disappointing contest to finish off Round 9. 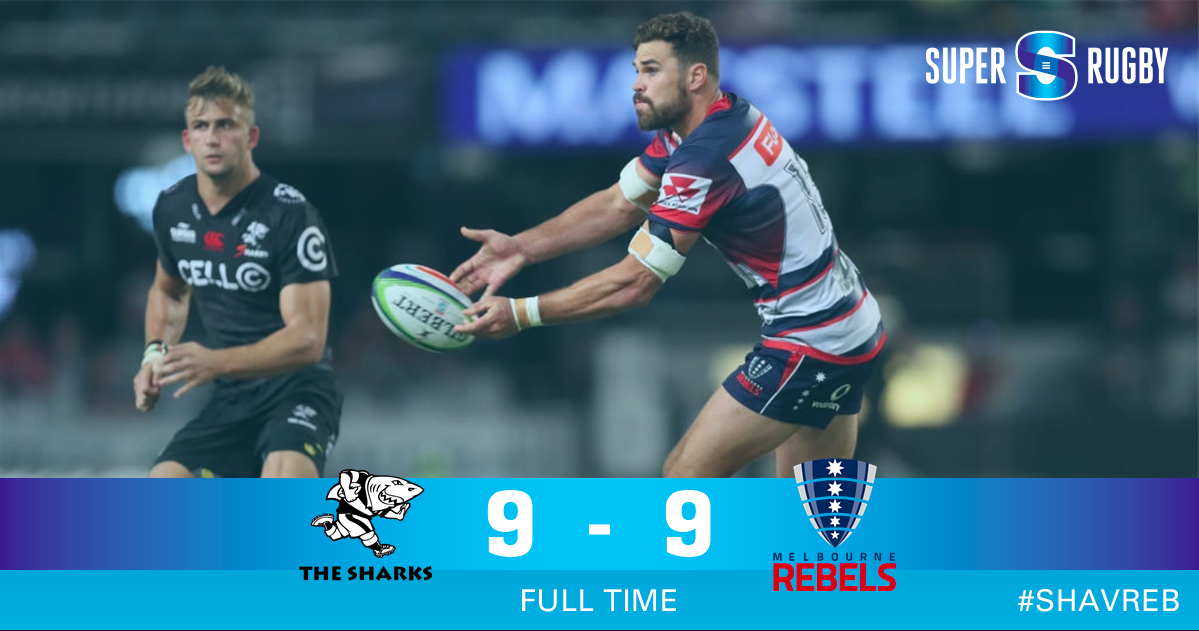