The Highlanders recorded their highest ever total against the Stormers when they thrashed the South African franchise 59-14 at Forsyth Barr Stadium in Round 10.

The result means the Highlanders have now won six of their nine games this Super Rugby season and they are looking more and more dangerous every week.

Meanwhile, the Stormers woes on the road continue and have taken another backwards step after their strong start to the season.

They still have the Hurricanes to contend with next week and Robbie Fleck will be hoping they can avoid another morale-damaging defeat.

The Stormers started more agressively of the two sides at the breakdown and more direct on attack than they did last weekend against the Crusaders. They were rewarded with this much-improved start when they scored the game's first try.

The move started when centre SP Marais got on the outside of Daniel Lienert-Brown after a couple of strong carries from Pieter-Steph Du Toit and Eben Etzebeth. But Siya Kolisi's dismissive hand-off was the highlight of the move before he produced a wonderful offload out the back of the hand to Nizaam Carr, who had a free run to the try-line in the 10th minute. An excellent conversion by Robert Du Preez ensured the men from the Cape took an early 7-0 lead.

The Highlanders replied almost instantaneously due to not one but two errors from the Stormers. A poor kick by Siya Kolisi gifted Ben Smith the ball and he was able to launch a counter-attack. Cheslin Kolbe then came off his wing impatiently and exposed his side out wide allowing Marty Banks' pass to loop over him. Then it was the simple task of the ball going through the hands with superior numbers and Patrick Osborne scored to mark his 50th appearance for the Otago outfit.

The Highlanders then took advantage of a dubious penalty when Oli Kebble seemed to be unfairly penalised for a dangerous tackle at the lineout. Aaron Smith produced a beautiful pass that skipped two players and hit Waisake Naholo in the gap. A wonderful pass from a wonderful player.

Rob Thompson then produced a sublime reverse pass out the back of the hand after reacting well to the bounce of the ball from a Stormers kick. It went though the hands again before Osborne stepped inside last man Etzebeth to grab his brace and put his side 17-7 up.

The Highlanders' fourth try came off the back of a penalty, opting to go for the line instead of taking the three. A powerful rolling maul disintegrated the Stormers defence and ensured that Liam Squire went over in the 31st minute. Banks converted from the touchline, seemingly preferring the more difficult kicks on the day, to put his side 24-7 in the lead.

It all looked like a recurring nightmare first-half for the Stormers from last week when they were also blown out of the water by the Crusaders in the first half an hour.

Patrick Osborne then made a try out of nothing on the stroke of half-time. He produced a magic sevens-style offload when he drew in two Stormers defenders to create the space and somehow got his hands free to set Rob Thompson off on the angle. Thompson evaded the diving tackle of EW Viljoen before having a clear run to the line. Banks converted as the home side went into the interval 31-7 up.

Pieter-Steph Du Toit was left red-faced when he misjudged the bounce of the ball, allowing Naholo to profit and grab his brace showing his pace from the halfway line. Banks made his third conversion as the Highlanders went 38-7 into the lead. 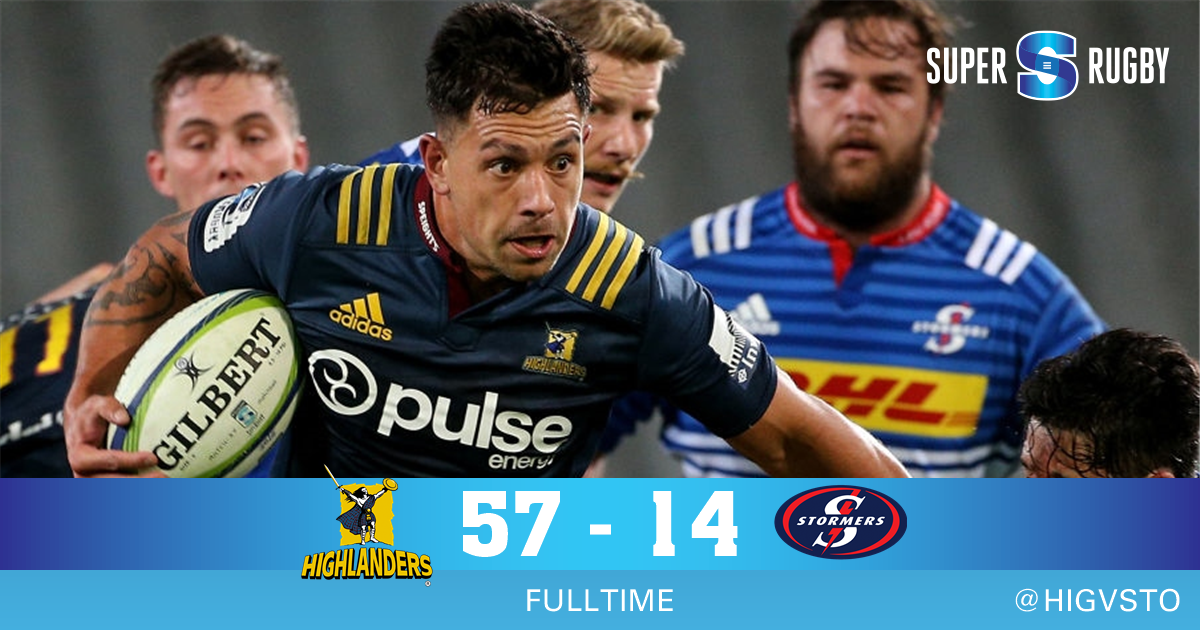 By the 65th minute the Stormers looked like they had given up. Aaron Smith took a quick touch and go penalty before hitting Dillon Hunt who bashed over as the Highlanders closed in on a record total against the Stormers.

Substitute Greg Pleasants-Tate then got over in the 72nd minute after good work by the Highlanders taking the ball through the phases with everyone from forwards to backs involved to make it 52-7.

The Stormers pulled one back when substitute scrum-half Dewaldt Duvenage dotted down after breaking off the back of a five-metre scrum to make the score 52-14 in the 74th minute after Du Preez's conversion.

Matt Faddes put the icing on the cake when Joe Wheeler's superb grubber found him after a move that went from right to left and back to the right after the hooter to end matters at 59-17.