Blues grind past Brumbies in Canberra

The Blues claimed their first victory in almost a month when they beat the Brumbies 18-12 in Canberra on Sunday.

As the scoreline suggests, this was a tight tussle although the Blues were the more enterprising side and they eventually outscored their hosts by three tries to none.

The result means they New Zealand teams have now won 15 consecutive matches against their Australian counterparts in this year's tournament.

Despite their victory, the Blues are still at the bottom of the New Zealand Conference table, seven points adrift of their nearest rivals, the Highlanders.

The Brumbies, meanwhile, are still in top spot in the Australian Conference standings, five points ahead of the Waratahs.

The Blues started brightly and were camped inside the Brumbies' 22 inside the first 10 minutes but all their attacking efforts yielded little reward.

They eventually opened the scoring via a Bryn Gatland penalty in the 11th minute when Wharenui Hawera was blown up for straying offside on defence.

Five minutes later, the Brumbies drew level courtesy of a Hawera penalty after an Akira Ioane indiscretion at a ruck.

The Blues continued to dominate and in the 24th minute Matt Duffie went over the whitewash in the right-hand corner in acrobatic fashion but the try was disallowed as the TMO ruled that he dotted down on the touchline in the in-goal area.

Duffie's disappointment turned to joy on the half-hour mark when he gathered an inside pass from George Moala before crashing over for the opening try with a couple of defenders on his back.

The rest of the half was slugfest, characterised by several unforced errors from both sides. The Brumbies had an opportunity to narrow the gap from the kicking tee on the stroke of half-time but their captain, Sam Carter, opted to kick for touch deep inside the Blues' 22.

His decision backfired as the Blues managed to keep the Brumbies at bay with a solid defensive effort and the men from Auckland held a slender 8-3 lead at the interval.

The Brumbies were fastest out of the blocks in the second half and two Hawera penalties meant they led 9-8 by the 51st minute.

It did not take long for the Blues to respond though and three minutes later they were back in front when Akira Ioane barged over from close quarters from the back of a line-out drive deep inside the Brumbies' 22.

Gatland failed to convert and on the hour-mark Hawera made it a one-point game when he slotted his fourth penalty. That would be the last time the Brumbies would score points, however, as the visitors finished stronger in the final quarter.

They continued to attack and were rewarded in the 67th minute when Gatland threw a long pass to Duffie who offloaded on his inside to Melani Nanai, who crossed for his side's third try.

And although Gatland failed with his conversion attempt again, the Blues did enough to hold on for the win. 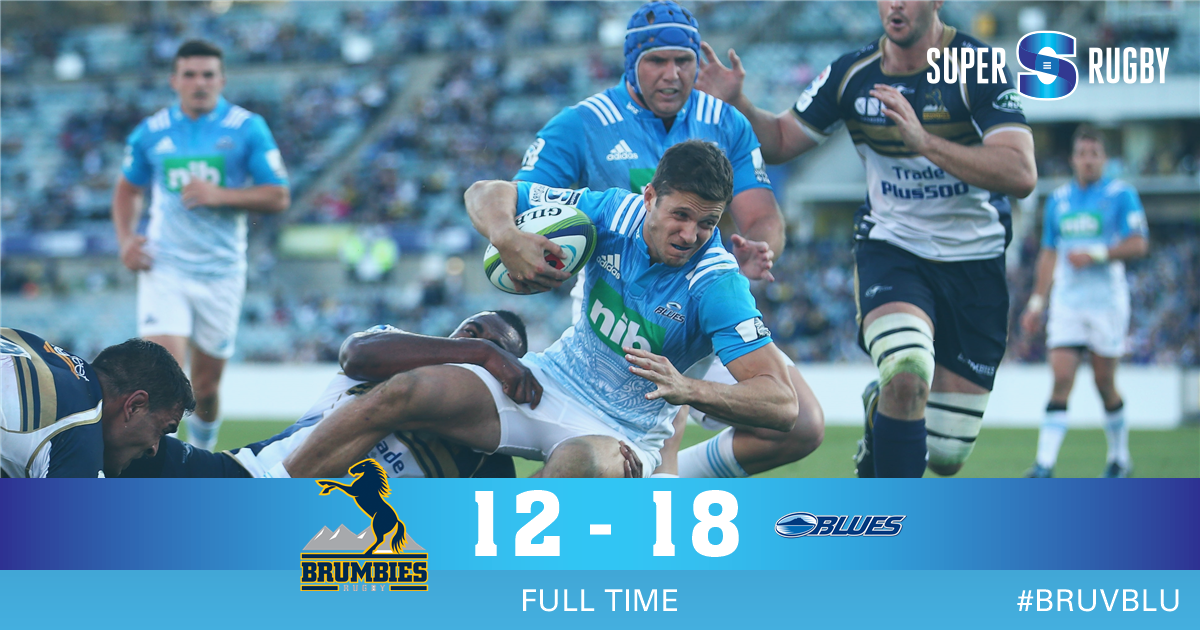