The Hurricanes moved up to second place in the New Zealand Conference after they beat the Stormers 41-22 with a bonus-point on Friday.

Despite scoring seven tries to one, the 'Canes didn't have things all their own way in Wellington as the Stormers were in touch until the 74th minute.

For the Stormers their try scorer was replacement hooker Ramone Samuels while Robert du Preez and SP Marais added the rest of their points.

It appeared like another hammering was on the cards for the Stormers when the Hurricanes dominated the opening quarter, but credit to the visitors who rallied before the break to go in just six points behind. That was despite a yellow card and losing their starting fly-half.

That man, Robert du Preez, opened the scoring on six minutes with a penalty after the Hurricanes were caught offside in midfield but that was as good as things got for the Stormers in the first 25 minutes, with the hosts then running in three tries in scintillating fashion.

The first crossing came on 10 minutes when Brad Shields charged down Dillyn Leyd's attempted chip kick near halfway, with Beauden Barrett then putting one of his customary cross-kicked out to Jane, who cut inside from the right en route to the posts. Jordie Barrett converted.

From the sublime to the comical then followed as Stormers number eight Nizaam Carr failed to ground the ball while sliding in his in-goal area and full-back Barrett ripped it from his grasp for the second try. He could not convert this score however so it was a 12-3 cushion.

That became 17-3 when another Beauden Barrett cross kick this time found Jordie on 24 minutes, this after Stormers hooker Bongi Mbonambi had been sin-binned for pulling down a maul. It was the Barrett show at this point, even with Jordie not having the best day off the tee.

Credit to the Stormers though who then rallied with a pushover try from replacement hooker Samuels. However they would then lose fly-half Du Preez to a shoulder injury and the Hurricanes pounced soon after with a score on the counter, the cross kick again sending over Jordie.

But in the blink of an eye the Stormers chipped away at the 22-10 scoreline in the closing minutes of the half, with Marais slotting two three-pointers from distance to pull them back within six points heading into the break. They would have been pleased with that recovery.

Marais was at it again six minutes into the second period with another long-range effort, with the offences racking up on the Hurricanes.

At this point it seemed the Stormers were building in confidence and when Marais locked things up at 22-22 on 52 minutes, it was game on.

The Hurricanes, in contrast, were clearly rattled and with their pride dented they snubbed kickable points and pushed for the corner. It backfired as the Stormers admirably stood firm and repelled the sustained attacks as the hour mark was reached in a fascinating fixture.

But cometh the hour cometh one of the Hurricanes' stand-out players this year as Laumape rolled over to the chalk on the right wing as the hosts' bravery in attack finally paid off. Jordie Barrett could not add the tough extras though so it was only a five-point lead, at 27-22.

They came close to extending that on 67 minutes but for Laumape being offside from a kick ahead, which meant Ardie Savea was denied a try.

The Stormers responded well and almost crossed from their dangerous maul before a knock-on followed, this after Brad Shield was sin-binned.

But the game will be remembered for Beauden Barrett's cross kicks and fittingly the 'Canes wrapped up the result from his boot as he found wing Savea in his 22 before he raced 70 metres before offloading for Laumape for the try.

The fly-half would then have the final say with a dart for the line from close range as the Hurricanes made it seven tries in front of their fans. 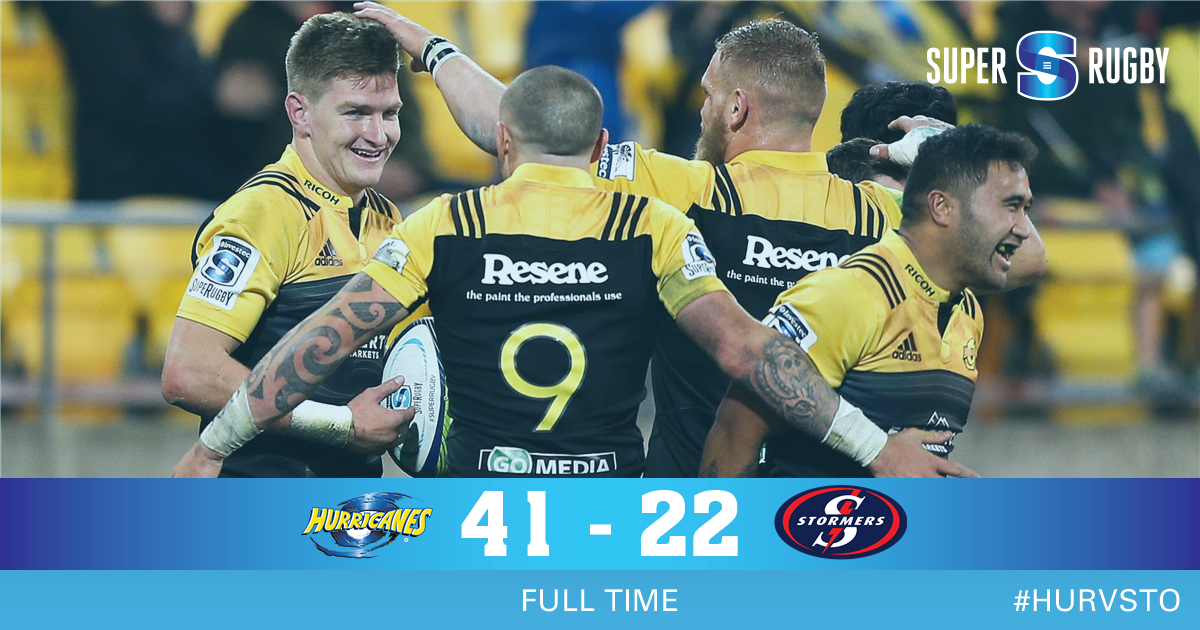