The Highlanders pulled off a truly unthinkable comeback against the Cheetahs, with three tries in the last five minutes sealing a 45-41 victory.

Tries from Tian Meyer and Sergeal Petersen meant the Cheetahs led 15-10 at the break but the Highlanders had every right to feel aggrieved after some highly questionable calls from the officials, with a harsh yellow card to Matt Faddes the pick of an ugly bunch.

Torsten van Jaarsveld's early score kept up the momentum for the hosts but the Highlanders hit back through Rob Thompson and Waisake Naholo to regain the lead.

A huge response was required and tries from Oupa Mohoje and a second for Meyer gave the Cheetahs the advantage once again, before Ox Nche crashed over to put the hosts through the 40-point barrier and in complete control.

Or so it seemed until the final five minutes, when scores from Tevita Li and Matt Faddes, both converted, cut the gap to three points at 41-38.

Waisake Naholo then did the unthinkable, finishing off a breathless attack from the kick-off which saw remarkable continuity by the Highlanders to snatch a win that seemed long gone. It appropriately rounded off one of the most bizarre yet enthralling games of the year so far.

Those chilly spectators packed into the Free State Stadium had something to cheer as early as the seventh minute, when a sweeping move took the Cheetahs from coast to coast for a try on his 50th cap for Meyer.

Henco Venter more than played his part after breaking from the base of the scrum, before feeding Petersen whose pace had the Highlanders scrambling ahead of the scoring pass to Meyer, who finished despite Naholo's best efforts.

Issues early on at the scrum for Daniel Lienert-Brown gave the Cheetahs valuable field position and in general the hosts felt sharp, Fred Zeilinga adding a penalty following his earlier conversion miss after top work from Petersen at the breakdown. With that, the Cheetahs led 8-0.

Once the Highlanders' scrum regathered itself the visitors were able to hit back, Nche penalised with Marty Banks landing three points to put his side on the board.

The Highlanders, already struggling in the back row with injuries, then lost Liam Squire to a wrist issue but after riding out a stern attack from the Cheetahs they countered up the field, Banks finishing off a sweeping attack after good passes from locks Joe Wheeler and Tom Franklin around the fringes.

Banks didn't need a second invitation, spotting a gap and showing his speed to finish by the posts. After an easy conversion the Highlanders now led 10-8.

Petersen thought he had snatched the lead back for the Cheetahs, only for his try to be chalked off not for the clear forward pass by Raymond Rhule as expected, but instead for obstruction.

Soon the officials were involved again, assistant referee Lourens van der Merwe recommending a yellow card for a stiff arm by Faddes without review of the TMO, who would have thought otherwise.

Capitalising on the Highlanders numerical disadvantage the Cheetahs went to the corner, initially mauling before sending the ball wide to Petersen to finish. Zeilinga converted from out wide to make the score 15-10.

There was no contention about the Highlanders' second yellow card, after a tip tackle from Siate Tokolahi, as the visitors' frustrations boiled over.

Making the most of their advantage the Cheetahs kicked to the corner and set up an impressive maul, hooker Van Jaarsveld crashing over with Zeilinga's conversion making the score 22-10.

The Highlanders responded brilliantly; Malakai Fekitoa's kick behind the defensive line forcing Petersen to track back and then be hauled over at the breakdown, before off the turnover Faddes found Thompson inside for their second try.

And a third wasn't far behind, the Highlanders producing a phenomenal team score made by Fekitoa releasing Banks before the ball was transferred back inside by Faddes and finished off by Naholo. With Banks' conversion, they led 24-22.

The Cheetahs came up a fine reply, smart angles after making the overlap following Nche's big run giving Mohoje the space he needed to finish in the corner from a fine assist by William Small-Smith.

Meyer then made it a double celebration with his second try, racing on to Raymond Rhule's kick over the head of Banks, giving the Cheetahs a ten-point advantage at 34-24 going into the final quarter.

The best was still to come, Nche scoring after a fine move involving Uzair Cassiem and Petersen as they turned the Highlanders defence inside out for try number six, crossing the 40-point barrier with Zeilinga's conversion.

Tevita Li's easy score helped to narrow the gap with five minutes to go before Fletcher Smith cut through, his break ending with a try for Faddes and suddenly jump-starting a contest which had seemed settled.

Banks' option to kick and chase might have seemed like a risk but it came off and from there the Cheetahs were scrambling, Fekitoa somehow stopped short before the ball found Naholo who coolly finished to spark wild scenes from the Highlanders players and bench having taken the lead seconds before the hooter sounded. 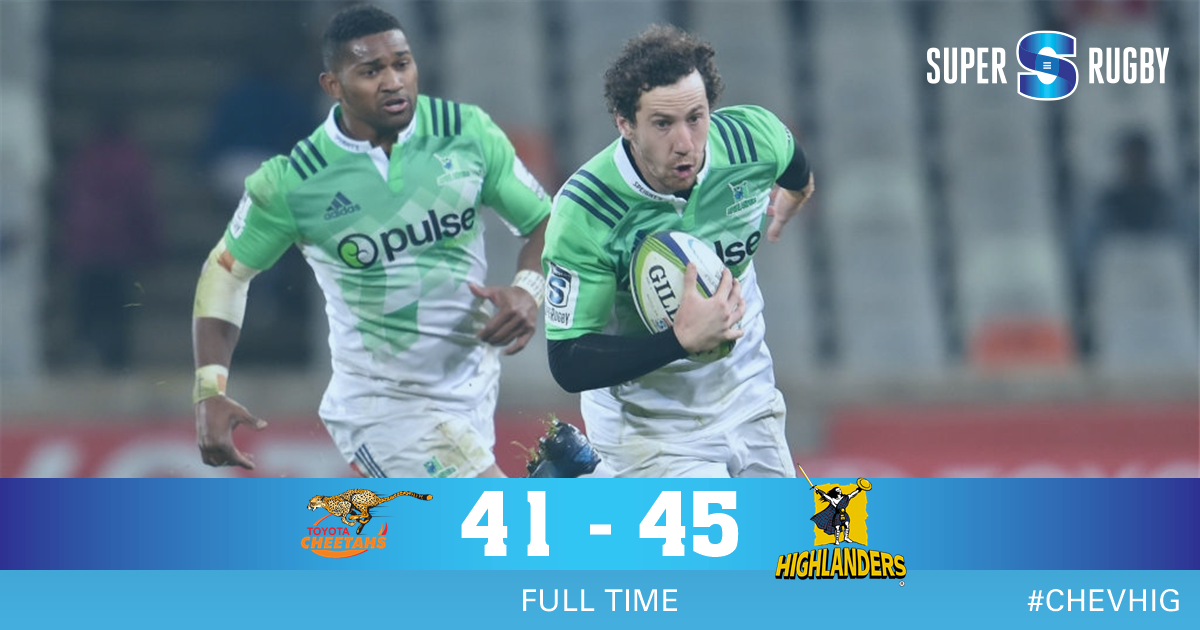