Lions Far Too Good for Rebels

The Lions had too much firepower for the Rebels in Melbourne, running in seven tries overall in a 45-10 victory to strengthen grip on South Africa 2 Conference.

Rusty early on with a number of handling errors, the Lions still had too much in the tank, with Kwagga Smith, Ross Cronjé and Courtnal Skosan all crossing before the interval to make it 19-7, the Rebels' points coming from a Tom English score.

Sylvian Mahuza, with a fabulous solo effort, and then a penalty try and finish from Anthony Volmink made sure the result was beyond doubt long before the final whistle.

As a result the Lions extend their lead at the top of the South Africa group to 16 points over the Stormers, with the Sharks 14 points behind the Lions in Africa 2 ahead of facing the Force later on Saturday.

This was also the Lions' seventh win in a row, with Johan Ackermann's side starting to resemble the team who reached last year's Super Rugby final.

Early possession went all the way of the Lions in wintery conditions at AAMI Park and they nearly capitalised through Skosan, with only Marika Koroibete's try-saving tackle keeping the score at 0-0.

The loss of Amanaki Mafi to injury early on didn't help the hosts but after Smith was penalised for taking out Ben Volavola following a kick, Hodge had a chance to add three points but couldn't convert.

Clearly the better side, the Lions were continually undone by small mistakes, such as when two players were offside ahead of Elton Jantjies' chip over the top with the Lions bearing down on the line.

Eventually it all clicked, Smith crashing over by the posts for the game's first points around the 20-minute mark as the Lions led 7-0.

Continuing to turn down kickable penalties, the Lions went back to their maul and soon had a second try through Ross Cronjé; the scrum-half showing some smart footwork after the maul had stalled to work his way over. Jantjies added the extras.

The Rebels hit back immediately, benefiting from the return of Mafi after treatment to his nose and after English bombed a certain score, the Rebels recycled with English latching onto Ben Meehan's low grubber to score, Hodge's conversion cutting the gap to seven.

Mafi was beginning to make his presence felt with two excellent turnovers at the breakdown but it was the Lions who finished the stronger in the first half.

Scything his way through after good handling from the backs and forwards alike was Skosan, who sped past the cover defence to finish by the posts. Jantjies' conversion made the half-time score 19-7. 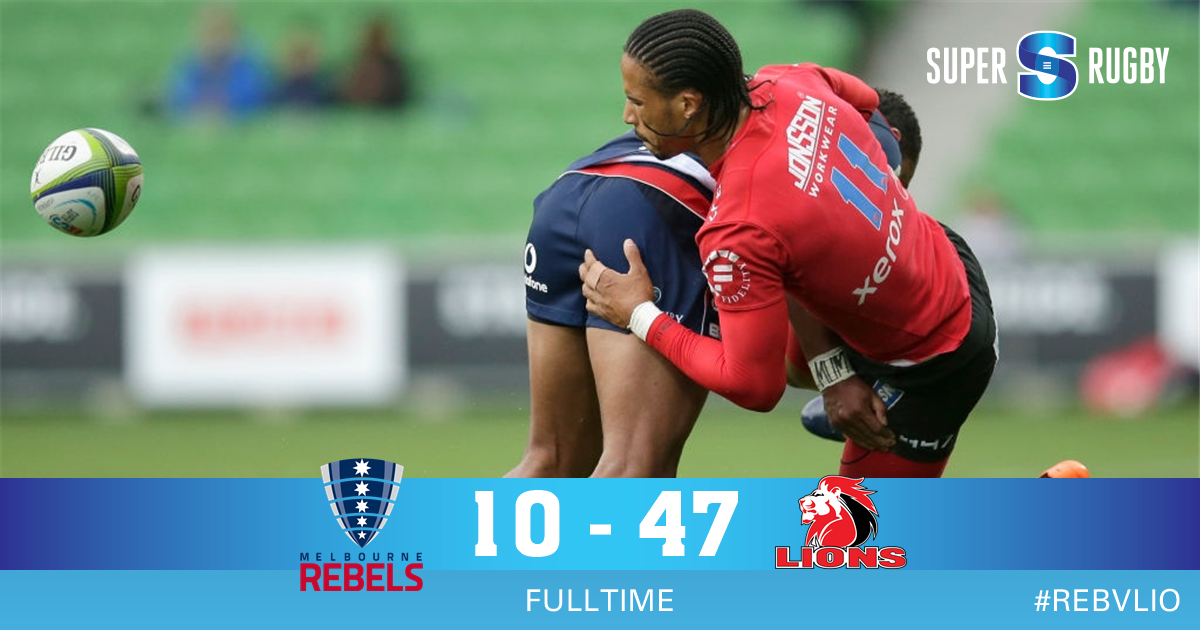 Hodge responded with a three-pointer after the break to cut the deficit before a spectacular solo score from Mahuza, breaking tackles with ease after taking Jantjies' offload and racing 60 metres to score.

And the one-way traffic continued after the Rebels illegally stopped the Lions' rolling maul, referee Shuhei Kubo awarding a penalty try and sending Culum Retallick to the bin in the process as the Lions advanced to 33-10 ahead, with Volmink soon strolling over to hit the 40-point mark for the Lions.

Despite the Rebels' best efforts they just could not find a way through a dogged Lions defence, with captain Warren Whiteley rounding off an exceptional win to hammer home the gulf between the two sides.