The Chiefs made light work of the Reds in the second half at Yarrow Stadium, with Stephen Donald grabbing a brace in a 46-17 win.

Charlie Ngatai scored on his first Super Rugby game since May 7 last year against the Highlanders, after almost a year out with concussion.

After an even first half it was the Chiefs who held the advantage at the break ahead 20-12, thanks to tries from Kane Hames and Ngatai plus two Damian McKenzie penalties cancelled out Reds tries from Stephen Moore and Eto Nabuli.

The second half however was all about the Chiefs, with Dominic Bird, Stephen Donald (2) and James Lowe all crossing in a one-sided affair.

As a result the Chiefs move just one point behind the Hurricanes in the New Zealand Conference after their best performance for some time following some unconvincing wins.

It was the Reds who struck first in New Plymouth courtesy of their rolling maul, with Moore setting himself up at the base before the visitors crashed over, with Quade Cooper converting to make it 7-0.

And there was more try-scoring action for the front row contingent although this time for the Chiefs as Hames burrowed over from close range, McKenzie levelling the scores with the extra two.

In fairness to the Reds however this was a fine start, chasing a fourth successive away win over the Chiefs going back to 2008, and Moore's persistence to go for the corner over kicking for the posts initially paid off.

The ever-improving Nabuli powered his way over after multi-phase pressure on the Chiefs defence to restore the Reds lead.

Two penalties from McKenzie put the Chiefs back in charge at 13-12, the second after George Smith was yellow card for a no-arms high tackle.

Easily the best cheer of the night went for Ngatai's bustling run up through the middle, hurling Cooper to the floor on his way, and his break proved to be the start of an attack which finished with a comeback score for the All Blacks centre.

McKenzie's conversion opened up a 20-12 advantage which despite the Chiefs' best efforts the score remained at half-time. 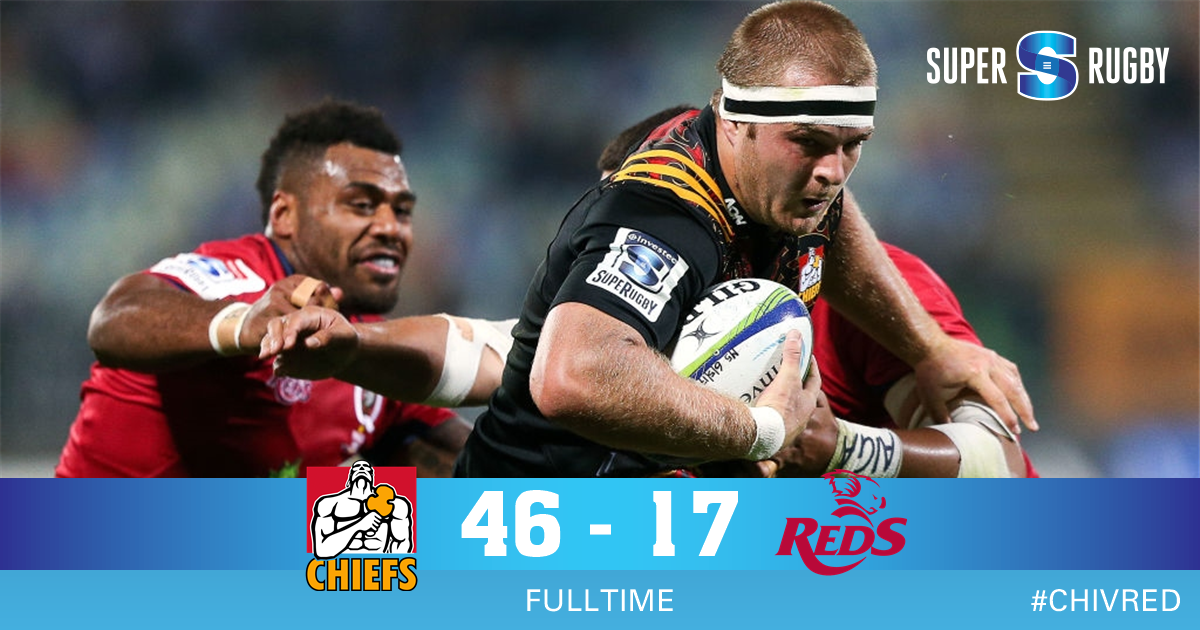 Bird kept up the momentum for the Chiefs when he crashed over soon after the interval, after an initial break from Tawera Kerr-Barlow, and once Donald raced over a couple of minutes later the results looked dead and buried at 32-12.

Soon after Donald had a double, crashing over after the pack shoved the Reds away at the scrum, as Ngatai departed to a warm reception on 54 minutes.

Campbell Magnay's score in response for the Reds added some window dressing to the scoreline but it was merely a blip on a solid night for the Chiefs, Lowe getting in on the act when he carved through Cooper far too easily to leave the Wallabies fly-half bewildered.

It summed up the second half well; all too easy for the Chiefs after the Reds had promised much more in the opening exchanges.