Propelled by a Rieko Ioane brace and 20 points from Piers Francis the Blues turned in a big 40-33 win over the Waratahs in Sydney.

The Blues showed excellent control in the first 40 minutes and capitalised on poor discipline by the hosts to go 26-0 up, thanks to four penalties from Piers Francis and tries by Rieko Ioane and Scott Scrafton.

Israel Folau and Tolu Latu led the resistance for the Waratahs but a second Rieko Ioane score put a dampener on the comeback, his brother Akira extending the lead further.

Despite late scores from Bernard Foley and Paddy Ryan, either side of a second for Folau, the game was long gone, as the Waratahs fell to a fourth defeat in five matches, even though they bizarrely finished with more tries on the night at five to four.

As a result the Blues remain six points adrift at the bottom of the New Zealand Conference and also the wildcard places in the Australasian Group.

No wonder the home supporters who actually turned up to Allianz Stadium were booing long before half-time. In a first half filled with moments of indiscipline, poor tactical kicking and soft defence, the Waratahs did themselves no favours.

Francis showed that he was in fine touch off the kicking tee with three early penalties to open up a significant 9-0 lead in Sydney, with Tana Umaga's side looking to win four games straight in Australia for the first time.

From the restart after Francis' third penalty they pounced on another Waratahs mistake. The tapped-back ball by David Horwitz was pounced upon by the Blues, giving Ioane the time and space he needed to race clear to score.

Then on the hooter when kicking three more points would have been the easy option, given Francis already had four under his belt, the Blues went for the jugular.

A quick tap featured good runs from Matt Duffie before the ball was recycled for lock Scrafton to canter over, arm raised in the air, with Francis converting for a 26-0 lead.

The only black mark for the Blues was a concussion to Sonny Bill Williams, with the Rugby World Cup winner not returning for the second half after failing his HIA.

A response had to come from the hosts and Folau tried to set the tone when he showed good strength and determination to go over in the corner, putting the 'Tahs on the board at 5-26.

The deficit had the Waratahs chasing the game, making each decision to turn down three points feel costly and especially so when the Waratahs maul was pinged for obstruction.

Momentum was undoubtedly with the home side but at 21 points down they desperately needed to start cracking the try line.

Latu looked like the man for the job, despite the best efforts on the line from Augustine Pulu, and once confirmed by the TMO and converted by Foley the Waratahs were back within sight of the lead at 12-26.

Just as the hope was there for the Waratahs, Rieko Ioane snuffed it out again. With a penalty advantage Ioane took a pop pass off the ground and then showed off his speed to race away for a second try, holding off the challenges of Folau and Cam Clark in his finish by the posts. 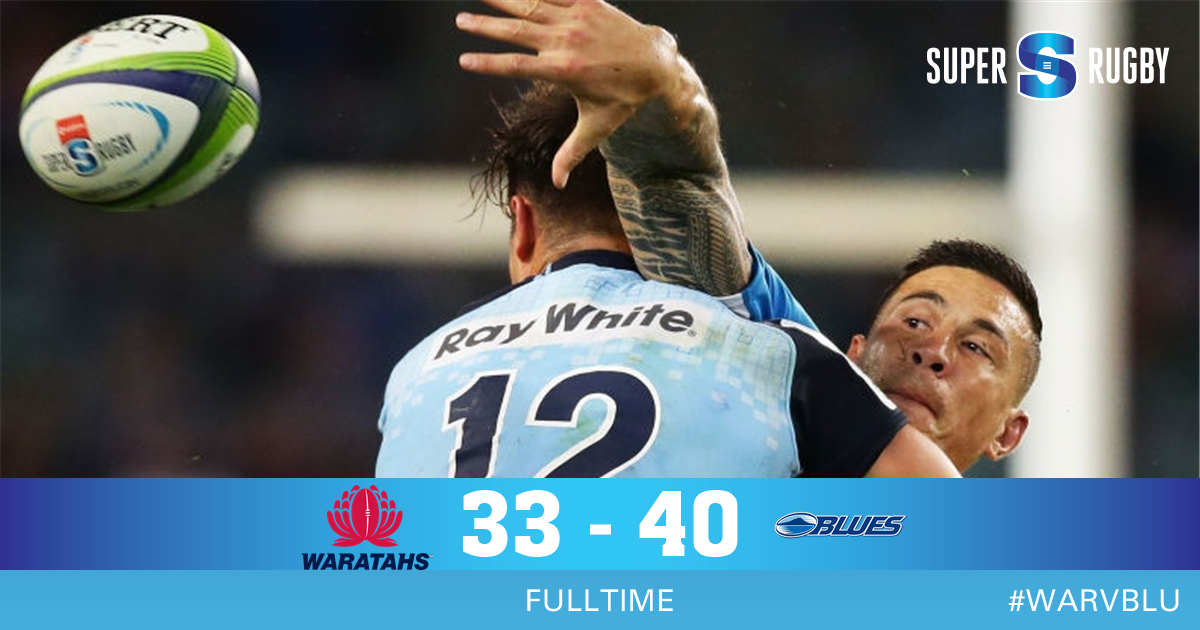 Not wanting to be outdone by his brother, Akira Ioane got in on the act after another handling error was incredibly picked up by Pulu using his feet, before finding the back-row who sped away for try number four to the Blues.

With Francis conversion the Blues cracked the 40-point barrier but the bonus point was still out of reach with the Waratahs within three two tries, and then one when Foley spotted an easy gap and cruised through without a hand on him.

Folau was the next man over, scooping up Bryce Hegarty's low grubber, with Will Skelton denied a late score after losing control over the line.

Paddy Ryan thundered over after the hooter to mean that with Foley's conversion the Waratahs did pick up a losing bonus point, but the final score hardly reflected a dominant win from the Blues.