The Crusaders made it 10 wins out of 10 with a comprehensive 62-24 victory over the Bulls at Loftus Versfeld on Saturday.

The Crusaders have now also amassed over 40 points in their last six games.

Meanwhile, the Bulls continue to struggle against New Zealand opposition having lost to the Blues and Chiefs as well this campaign.

They have failed to score enough tries with just with just 22 all season and only three in this game.

Both sides were fiercely competitive at the breakdown in a game that saw plenty of turnovers won but the Crusaders showed they are experts in the counter-attacking department.

The Crusaders took an early fifth minute lead. From a lineout Pete Samu hit a gap. He was taken down but not held in the tackle so got up and powered through for a wonderful solo try, thanks to poor Bulls defence.

The Crusaders then turned defence into attack from a turnover as they won in their own half. Richie Mo'unga collected his expert chip and chase before being brought down by a good Jamba Ulengo tackle. From the recycled ball they won a penalty after Bulls' infringement at the breakdown. It was taken quickly by the Crusaders and Tim Bateman went over to score his third try of the season in his fourth start of the campaign. Mo'unga coverted as the 'Saders stormed into a 14-0 lead.

The 'Saders scored their next try in untypical fashion, taking the ball through the trenches and doing the hard yards around the fringes. Their persistence paid dividends when Scott Barrett eventually burrowed over. Mo'unga converted to extend the lead to 21-3 just before the half-hour mark.

Shortly afterwards Jack Goodhue got the first Super Rugby try of his career. Once again Mo'unga provided the spark when his expertly weighted grubber found the chasing Goodhue who finished clinically.

Seta Tamanivalu got in on the act next on the stroke of half-time. The Crusaders won a penalty at the scrum which resulted in a lineout in the Bulls 22. The visitors managed to string together 13 phases before Tamanivalu picked up from a ruck a few metres out and scored as the 'Saders went into the break 31-3 up.

The Bulls' tactical kicking was poor throughout the game, often missing touch. And the Crusaders capitalised on this for their fifth try. A nothing kick from Tian Schoeman was gleefully gobbled up by David Havili before stepping his way through a weak Bulls defence.

Soon afterwards the away side passed the 40 point mark. Mo'unga provided the assist for his own try as he kicked, chased and collected to run under the posts. Once again the 'Saders scored from a turnover, showing they are at their most dangerous immediately after winning the ball back.

And once again they scored from a turnover and courtesy of a grubber kick; this time Goodhue putting the ball through for himself to collect and go over as the Crusaders reached their half-century on the 50 minute mark.

Francois Brummer then took a leaf out of the Crusaders' book when his grubber assisted Jesse Kriel who showed good pace to run under the posts for his side's first try of the game. He converted the try as the Bulls at least reached double figures at 50-10.

Goodhue then turned creator when he made a clean break and offloaded to substitute Andrew Makalio who coasted over for a 55-17 lead.

The Bulls responded when Warrick Gelant hit a half gap, went to ground and offloaded to Nick de Jager, who passed to Jan Serfontein on the wing. Serfontein drew the last defender before assisting Jamba Ulengo.

Mitchell Hunt then pounced on a loose ball after Rudy Paige's errant pass and ran through to score his side's tenth of the match. Hunt converted his own try to make it 62-17.

Gelant then pounced on a loose ball after Ryan Crotty fumbled. Gelant passed to Serfontein who had the legs to run from the half-way line under the posts. Brummer converted as the score ended 62-24. 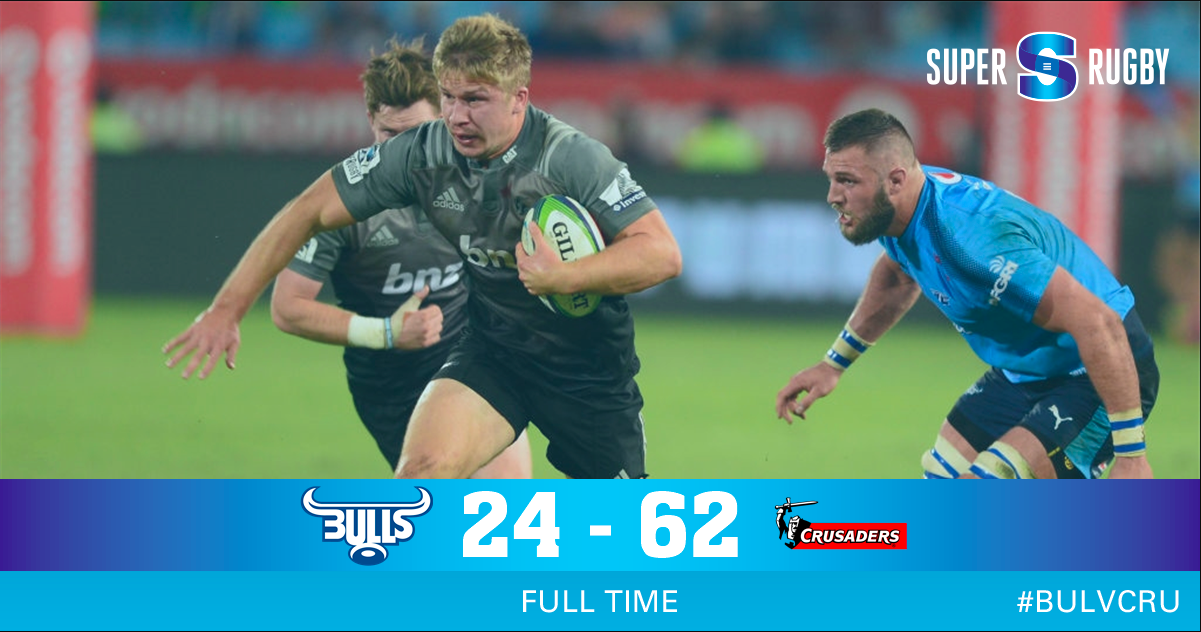