The Blues continued with their impressive form of late when they claimed a deserved 50-32 victory over the Cheetahs in Auckland on Friday.

In an entertaining encounter, in which both sides ran the ball from all areas of the field, the Blues gradually took control of proceedings and eventually outscored their opponents by eight tries to four.

The win is the Blues' third one in a row while the Cheetahs have now suffered eight consecutive defeats.

The result means the Blues are still at the bottom of the New Zealand Conference table although they are just one point adrift of the Highlanders who have played one match less.

The Cheetahs, meanwhile, are still third in the Africa 1 Conference standings although they are 11 points behind the Stormers, who are in first spot, and just four ahead of the bottom-placed Sunwolves.

The Blues made the brighter start and were soon camped inside the Cheetahs' half but they failed to score any points during this period.

That proved costly as the visitors took the lead in the eighth minute when, after taking the ball through eight phases in the build-up, Francois Venter ran onto a Clayton Blommetjies pass deep inside the Blues' half before diving over for the opening try.

It did not take long for the home side to respond though and shortly afterwards, Melani Nanai set off on an attacking run down the left-hand touchline. He did well to draw in a couple of defenders before offloading to Rieko Ioane, who crossed for a deserved try.

The Cheetahs struck back via a Torsten Van Jaarsveld try from a line-out maul deep inside the Blues' 22 but the topsy-turvy nature of this clash continued when, five minutes later, Scott Scrafton shrugged off a tackler close to the visitors' try-line before dotting down under the posts.

The Blues then stepped up a few gears on attack and they were rewarded in the 23rd minute when Akira Ioane spotted a hole in the visitors' defence and glided through it before crossing in the right-hand corner.

Five minutes before half-time, Scrafton turned provider when he threw an inside pass to Patrick Tuipulotu on the edge of the Cheetahs' 22. The big All Black lock still had work to do but did well to outsprint the cover defence before crashing over for his side's fourth try.

The Cheetahs finished the half stronger, however, and two Zeilinga penalties meant the Blues led 24-18 at the interval.

The home side were fastest out of the blocks in the second half and three tries - from Steven Luatua, Augustine Pulu and Rieko Ioane - in a five minute burst early in the half paved the way to victory.

Ioane's five-pointer was the best of the lot and he crossed the whitewash after combining brilliantly with his brother, Akira, down the left-hand touchline.

To their credit, the Cheetahs did not surrender and struck back via an Elandre Hugget try from another line-out drive but 10 minutes later the Blues reached their half century when Nanai rounded off a flowing move under the posts.

Although they were beaten, the Cheetahs continued to attack and their penchant for attacking from lineout drives was rewarded again in the 76th minute when Hugget crossed for his second try.

The rest of the match petered out but the Blues knew their job was done and they kept the Cheetahs at bay with a solid defensive effort in the game's closing stages. 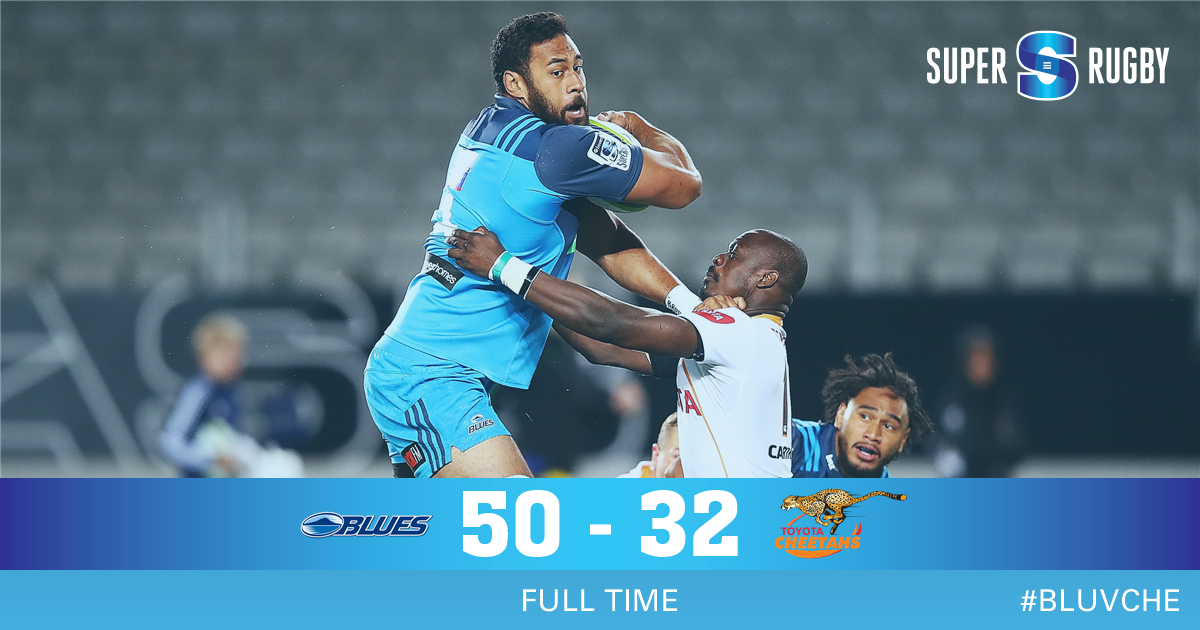