The Lions got the job done but were made to graft for their 13-6 victory over the Brumbies in Canberra on Friday.

As the scoreline suggests, this was an even contest and the Brumbies held a slender 3-0 lead at half-time courtesy of a Wharenui Hawera penalty.

The men from Johannesburg took control of proceedings after the break, however, and a solitary Kwagga Smith try early in the second half proved the difference between the sides.

With the win, the Lions consolidate their position at the top of the Africa 2 Conference table and while the Brumbies are still in first place on the Australian table, their poor run against foreign opposition continues with their three victories in the competition all registered against Australian teams.

The result also means the Lions have won all three their matches on their tour of Australia - after also beating the Force and Rebels - and they have now won their last eight matches in the competition.

The Brumbies did most of the early attacking and spent large parts of the opening half camped inside the Lions' 22.

The hosts thought they had taken the lead in the fifth minute when James Dargaville went over the whitewash after running onto a deft offload from Scott Fardy, but the try was disallowed when television replays revealed that Joe Powell had knocked on in the build-up.

The rest of the half was a war of attrition and although the Brumbies dominated the territorial and possession stakes, Hawera's three-pointer off the kicking tee was all they had to show for their efforts.

The visitors seemed frustrated by the Brumbies' tactics and there was little change in the home side's approach during the early part of the second half.

Shortly after that, Lionel Mapoe gathered a wayward Aidan Toua pass - midway between the Lions' 22 and the 10-metre mark - and offloaded to Kwagga Smith, who showed a superb turn of speed as he outpaced the cover defence and ran a full 70 metres before crossing for a deserved try.

The Brumbies did not take that lying down and they narrowed the gap to four points on the hour-mark when Hawera succeeded with his second penalty.

The home side tried gallantly to haul in their opponents as the game progressed and although they did spend some time in the Lions' 22, they could not cross the whitewash.

The visitors finished the stronger and an Andries Coetzee penalty in the game's closing stages secured them the result. 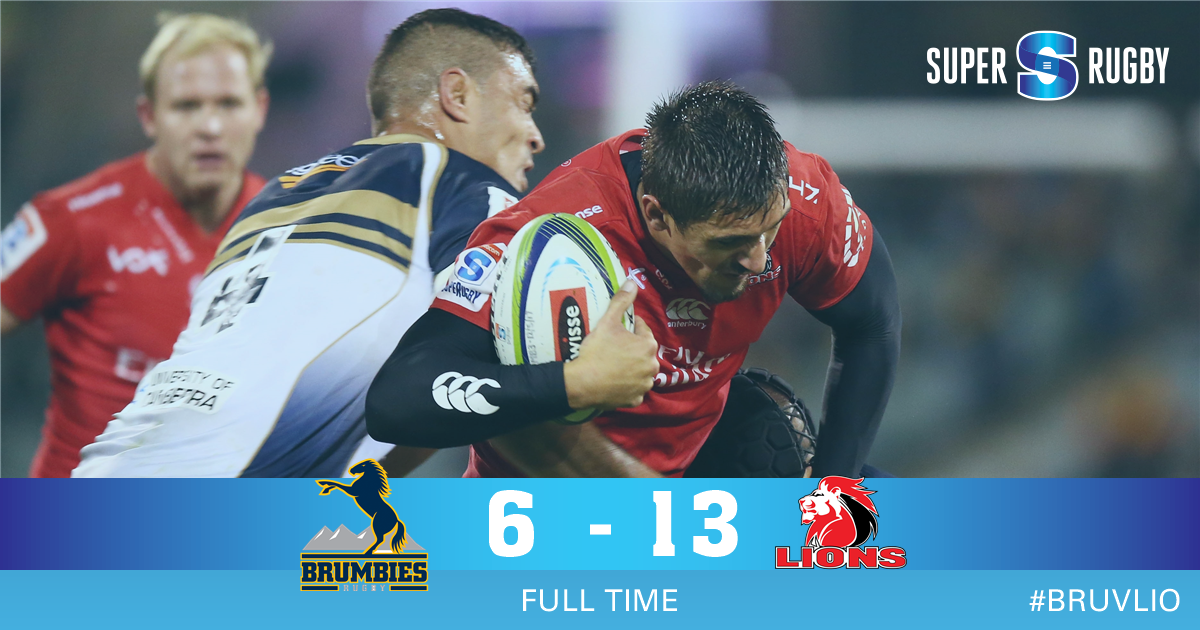