The Sharks bounced back from last week’s shock defeat to the Kings with a 38-17 win over the Sunwolves in Singapore in round 13.

The Sharks scored through a brilliant hat-trick from Lwazi Mvovo, Ruan Botha and Sbu Nkosi (2) while the Sunwolves’ tries came from Takeshi Hino and Shuhei Matsuhashi.

The Sunwolves were denied back-to-back home wins for the first time in their tenure in only the second ever meeting between the two sides.

Meanwhile, the Sharks consolidated second position on the Africa 2 standings and it is the first time in their Super Rugby history that they have won three games outside of South Africa in succession.

The Sharks played like a team hurting from last weekend and with a point to prove. Beware of the wounded animal, they say, and so it was proven true.

There was a spell in which they looked like they were going to run away with it but the Sunwolves showed character in the second half to pull it back.

However, a late surge from the Sharks ensured the scoreline slightly flattered the visitors.

Sharks full-back Mvovo gave his side the lead when he found space to burst over after just two minutes on the clock. Garth April added a superb conversion from out on the right touchline as the men from Durban took an early 7-0 lead.

From a lineout just inside the Sharks 22 the Sunwolves set up a maul from which the Sharks were penalised for offside.

The hosts took the penalty quickly and went out wide. They changed direction a few times, taking it through the phases before Hino barged over from close range. Fly-half Yu Tamura added the extras to level the scores.

However, the Sharks were soon in the lead by 14-7. After winning a scrum penalty in a kickable position, they opted to go for touch instead. They employed the driving maul and Botha went over. April added another difficult conversion, continuing to impress from the tee this season.

The Sharks turned defence into attack for their third try when Lukhanyo Am pounced on a loose Sunwolves pass to feed Nkosi who raced away to dot down for his first try of the season in the 33rd minute. 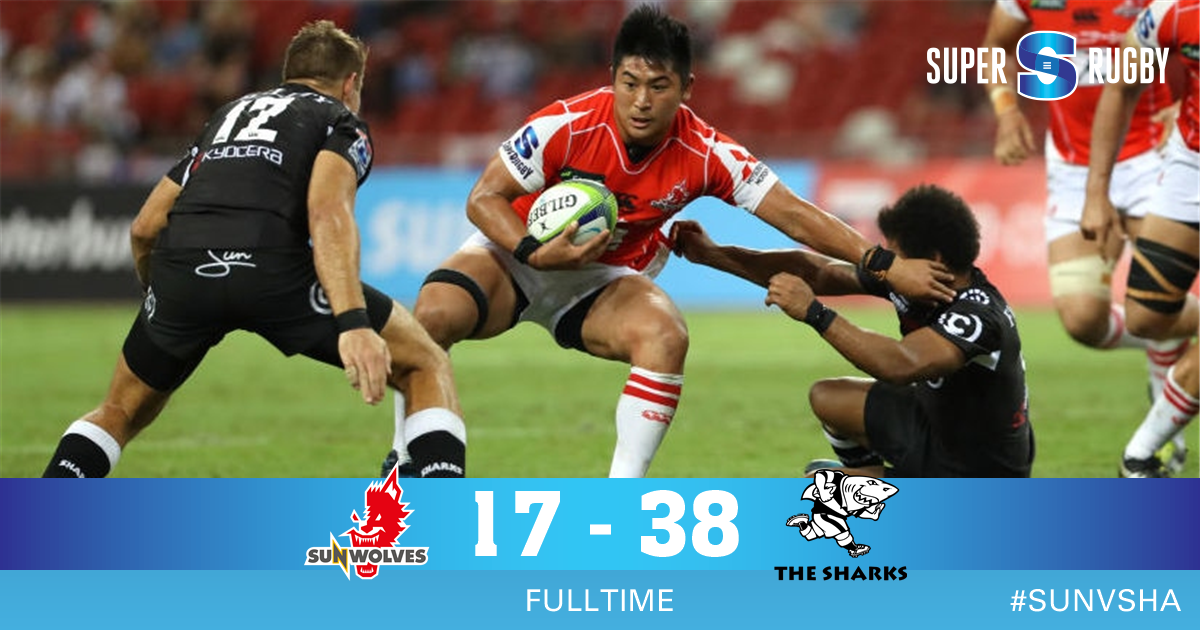 Sunwolves flank Matsuhashi got his side’s second try after excellent play from experienced scrum-half Fumiaki Tanaka who was aware of where the space was, putting Matsuhashi through the gap as he raced over to dot down. Tamura added the extras to bring it back to within seven at 21-14. Jumpei Ogura, on as a replacement for Tamura, then kicked a penalty to cut the deficit to four points.

Mvovo bagged his brace to put the game out of reach. It was an excellent try as Mvovo bashed three defenders out of his path on the way to the try-line after he received from Ettiene Oosthuizen who handed one off one defender before offloading to Mvovo.

From a lineout the Sharks went wide. Philip van der Walt couldn’t control the ball and it went backwards. Harumichi Tatekawa got the ball and passed to his outside but the ball was intercepted by Nkosi who had the pace to score his second.

Then from broken play Jean-Luc du Preez found space and gave a beautiful offload pass with a flick out the back of the hand to a onrushing Mvovo whose pace ensured he notched up his hat-trick in the last play of the game.