The Brumbies got the job done but were made to work very hard before securing a 19-10 victory over the Kings in Port Elizabeth on Saturday.

The result is a momentous one for the two-time champions as it is the first time an Australian side wins a match in South Africa this year and it also ends the Kings' three-match winning streak.

In a tight tussle, in which the result was in the balance until late in the final quarter, the Brumbies eventually got the rub of the green and outscored their hosts by three tries to one.

The Brumbies controlled the possession and territorial stakes but they could not capitalise on that dominance and squandered several point-scoring opportunities especially during the first half.

The Kings led 10-5 at the interval thanks to a penalty try and a Lionel Cronje penalty and the Brumbies' only points of the half came courtesy of a Josh Mann-Rea try.

The result means the Brumbies extend their lead at the top of the Australian Conference standings while the Kings are still at the bottom of the Africa 2 Conference table.

The home side were fastest out of the blocks and were awarded their penalty try as early as the fourth minute.

This came after Makazole Mapimpi did well to kick the ball ahead and just before regathering in front of the Brumbies try-line, he was tackled by Tom Banks who was also yellow carded for his indiscretion.

The Kings continued to dominate and extended their lead in the 17th minute via Cronje's penalty. But they suffered a setback shortly afterwards when Ross Geldenhuys was yellow carded for a cynical infringement on defence close to his try-line.

Two minutes later, the Brumbies reduced the deficit when Mann-Rea crashed over for their opening try from a line-out drive deep inside the Kings' 22.

The Brumbies upped the ante on attack after that score and two minutes before half-time Rory Arnold crossed the whitewash but his effort was disallowed after television replays revealed that Sam Carter's final pass was forward.

The second half was an attritional affair and although both sides tried gallantly to gain the upperhand, we had to wait until the 64th minute for the first points of the half.

This came when Aidan Tou gathered a Joe Powell grubber kick superbly before diving over the whitewash. Wharenui Hawera added the extras which meant the Brumbies held the lead for the first time with the score at 12-10.

The men from Canberra continued to attack in the game's closing stages and their efforts were rewarded in the 70th minute when Tevita Kuridrani stabbed through a teasing grubber kick before Banks grounded the ball behind the home side's try-line.

The Kings tried gallantly to reduce the deficit but were kept at bay by a resilient defensive effort from their visitors. 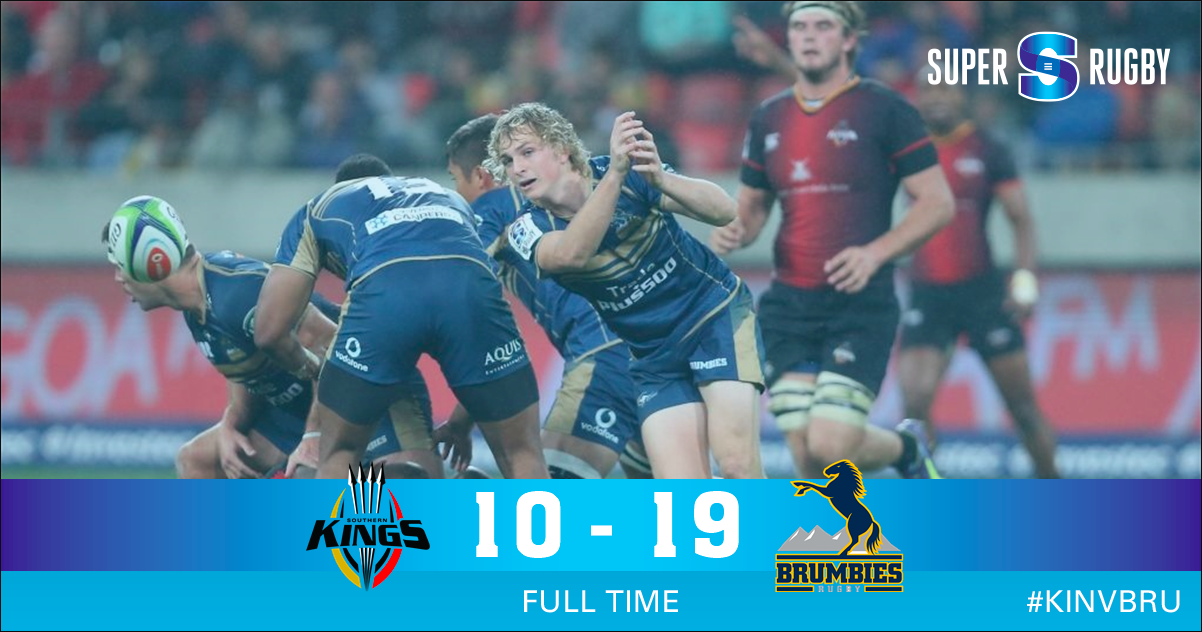