The Lions made a statement of intent when they beat the Bulls 51-14 in their South African derby in Johannesburg on Saturday.

The home side were full value for their win and their free-flowing and fast paced style of play proved a real handful for the Bulls and the Lions eventually outscored their visitors by seven tries to two.

The Lions were superb in the opening half and a brace of tries from Ruan Combrinck and further five-pointers from Kwagga Smith, Ruan Dreyer and Warren Whiteley as well as excellent goalkicking from Elton Jantjies gave them a 39-14 lead at half-time, with the visitors' points registered via converted tries by Jan Serfontein and Jesse Kriel.

The Lions were forced into a late change when Sylvain Mahuza was forced to withdraw due to injury but his replacement, Combrinck, made an immediate impact when he scored the game's opening try as early as the second minute.

The Springbok flyer ran onto a Andries Coetzee pass, midway between the halfway mark and the Bulls' 22, and delivered a chip kick over the head of Kriel before regathering and diving over.

It did not take long for the visitors to respond and they did so in style when Francois Brummer threw an inside pass to debutant Sibahle Maxwane who beat a couple of defenders before offloading to Serfontein who scored under the posts.

Jantjies added two penalties which meant the Lions led 13-7 midway through the half but the hosts soon doubled their lead courtesy of impressive tries from Smith and Dreyer.

The latter one was particularly impressive as the burly prop showed the cover defence a clean pair of heels after running onto a fine pass from Franco Mostert on the edge of the Bulls' 22.

The Bulls appeared shellshocked by that opening salvo from the home side but to their credit they struck back via a try by Kriel, who shrugged of challenges from Courtnall Skosan and Smith before powering his way over the try-line.

The Lions struck back on the half-hour mark when Whiteley charged down an attempted clearance kick from Rudy Paige - at a lineout close to the Bulls' tryline - before diving onto the ball as it rolled over the whitewash.

On the stroke of half-time, Combrinck got over for his second try after stepping past a couple of defenders deep inside the Bulls' 22 and with the score 39-14, the Lions were in control of proceedings as the teams changed ends at the interval.

The second half was a more subdued affair although the hosts increased their lead three minutes after the restart when Franco Mostert got over for their sixth try.

This after Skosan gathered an inch perfect crossfield kick from Jantjies before offloading to Malcolm Marx who managed to free his arms to get a pass out Whiteley who was stopped just short of the tryline.

The ball was recycled quickly, however, and Mostert barged over from close quarters.

The rest of the half saw plenty of end-to-end action as both sides ran from all areas of the field but both sides battled to score further points.

Just before full-time, the Lions launched one last attack and Lionel Mapoe rounded off a flowing move which Jantjies converted to add the final nail to the Bulls' coffin. 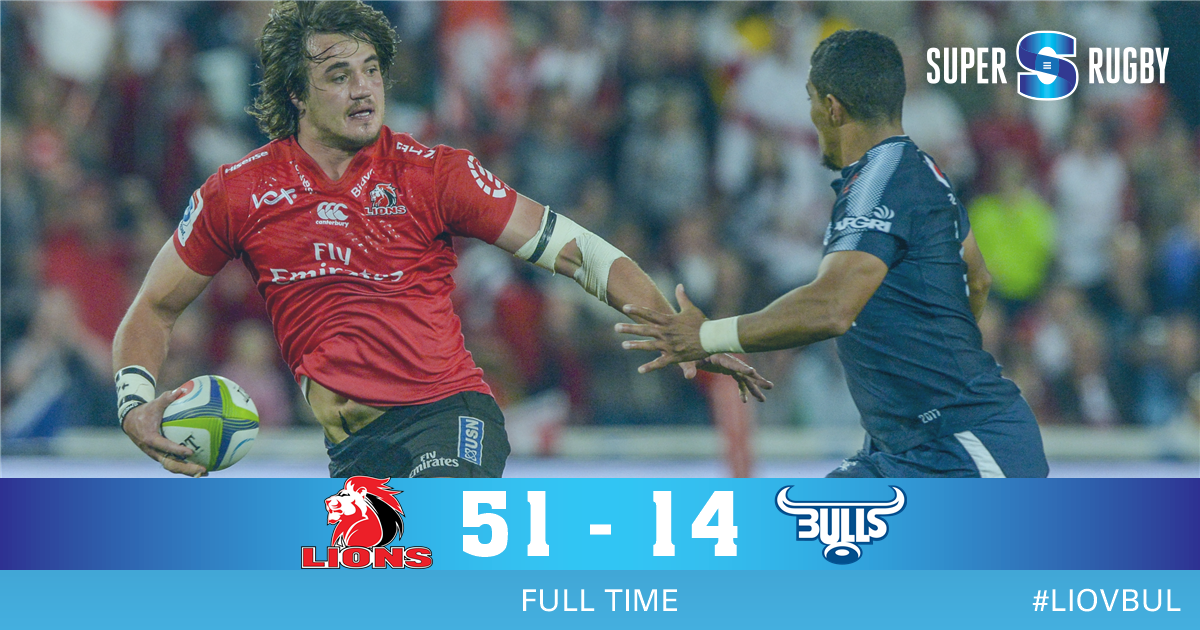