The Waratahs moved up to second spot in the Australian Conference after they beat the Rebels 50-23 at Allianz Stadium.

Amanaki Mafi and Jonah Placid (2) crossed for the Rebels, who remain on just one win this season, with only the Sunwolves on fewer points.

The 'Tahs led 24-11 at the break and had the bonus point next to their name after scoring tries through Phipps, Mumm, Hanigan and Folau.

Not helping the Rebels' cause was the sight of centre and captain Reece Hodge being stretchered off after just two minutes after he made a tackle on Folau. That was a blow to not just their midfield attacking options but also long-range goal-kicking as Sione Tuipulotu came on.

Four minutes later it was the Rebels who edged ahead via Volavola's boot, but the Waratahs responded soon after when Foley's run after good hands from Sekope Kepu and Tom Robertson led to the fly-half finding Phipps on his shoulder who crossed. Foley added the conversion.

7-3 became 7-6 on 11 minutes thanks to a Volavola penalty and there were several more offences from the 'Tahs that followed, ultimately leading to hooker Tolu Latu being sent to the sin-bin for going off his feet. Referee Angus Gardner had no option as they had been warned.

The Rebels capitalised quickly when Mafi crossed from a quick tap to move 7-11 in front, with Volavola hitting the upright with his extras.

Fortunately for the Waratahs their discipline improved and on 31 minutes recycled ball went left to where Mumm finished off well for 12-11.

More joy was to come before the break too as quick hands found Hanigan for a run-in and then Taqele Naiyaravoro's power led to Folau galloping over the whitewash. Suddenly the Waratahs had themselves a 13-point cushion which seemed highly unlikely after the first quarter.

The Rebels were forced to make a change at the break and it paid off on 49 minutes as Placid crossed wide out to cut the gap to seven.

That sparked both teams trading blows on the scoreboard as first the Waratahs hit back five minutes later when full-back Folau reached out for his second try of the game before Placid got his own double on the hour mark following a break from Mafi. That meant it was 29-23.

However, that was a close as the Rebels came as a lovely handling move down the left channel saw Hooper score for the 'Tahs before hooker Fitzpatrick made it 43-23 with a try on 73 minutes and then Hegarty crossed late to put the seal on just their fourth win of the campaign. 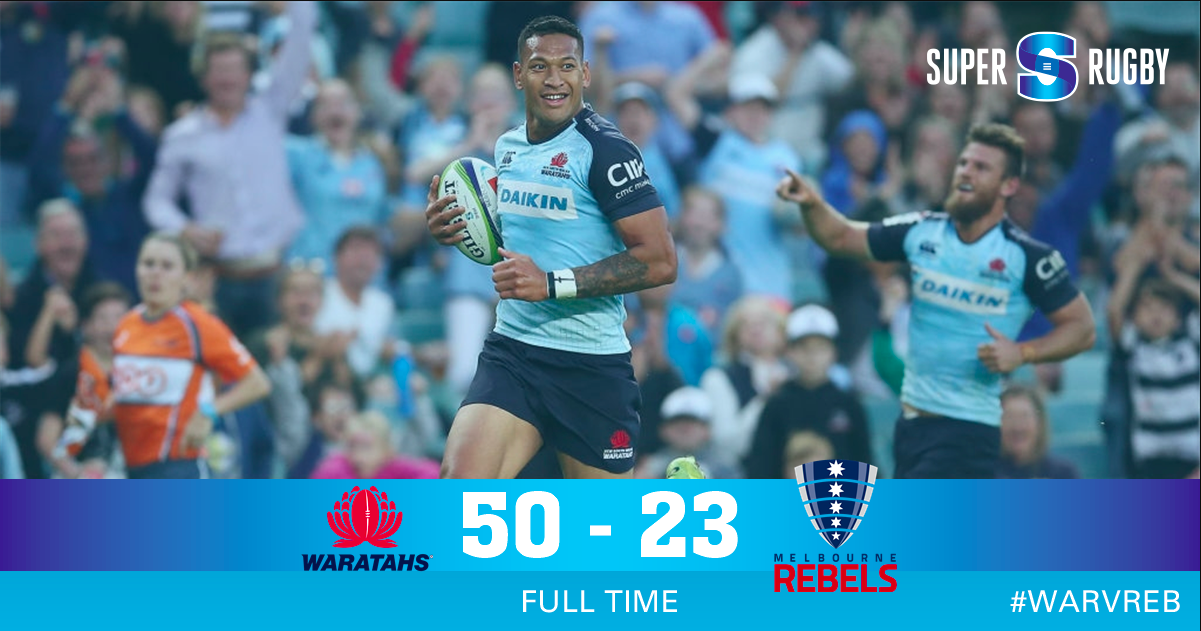