The Blues and Chiefs could not be separated as they played out a 16-16 draw in their Super Rugby clash at Eden Park on Friday.

Rieko Ioane scored the Blues' only try while the Chiefs crossed through Damian McKenzie and Johnny Faauli, with this result a setback.

The Chiefs are now nine points behind the pace-setting Crusaders, who are likely to prevail against the Rebels in Melbourne on Saturday.

The rain in Auckland led to several errors from both sides in the first period but it was the Blues who had their noses in front by 13 to 8.

It was the Chiefs who hit the front first though when McKenzie slotted three points on six minutes after the Blues had failed to roll away. Blues fly-half Piers Francis did level matters six minutes later when referee Nick Bryant penalised Chiefs flank Sam Cane for no clear release.

It took until the 15th minute for the first serious attacking opportunity to come as a good break from Tawera Kerr-Barlow off the base of a scrum was not finished off by James Lowe, whose kick ahead rolled over the dead ball area. It was a positive for the Chiefs to build on though.

The Blues did miss a chance to edge in front on 17 minutes but Francis was off target . They would though turn out to be the next scorer, with Ioane picking a smart angle off Augustine Pulu off a ruck five metres out to bust the deadlock. With Francis' conversion it was 10-3.

Francis made it 13-3 a minute before the break following an offence from Cane but for the second time the Blues were sloppy at the restart and the Chiefs made them pay. This time it was McKenzie who went through a gap before showing pace to the corner for an unconverted try.

Coming out for the second period the rain continued to fall and errors followed suit as both sides struggled to handle the slippery ball.

Francis though was unfazed off the tee and when Nepo Laulala played Pulu at the base he stepped up to move his side 16-8 in front.

Cruden did cancel that out 11 minutes later following a scrum penalty and Blues boss Tana Umaga promptly made changes up front.

Substitutions were prominent just after the hour mark as the Blues in particular looked for fresh legs to avoid any effects of their long flight back from South Africa. It didn't appear to improve their issues at the scrum though as the strong Chiefs continued to dominate in that area.

It was from broken field though that the Chiefs hauled themselves back level at 16-16 as a breakout from James Lowe led to McKenzie's flat wide kick finding Faauli for a run-in on the right wing. Cruden couldn't add the touchline extras so there was 11 minutes to find a winner.

Francis had that chance off the tee on 73 minutes but was wide of the posts and despite a frantic finish in heavy rain, neither side could press in the opposition red zone sufficiently to pick up the four points as they were forced to settle for a draw that suits neither outfit. 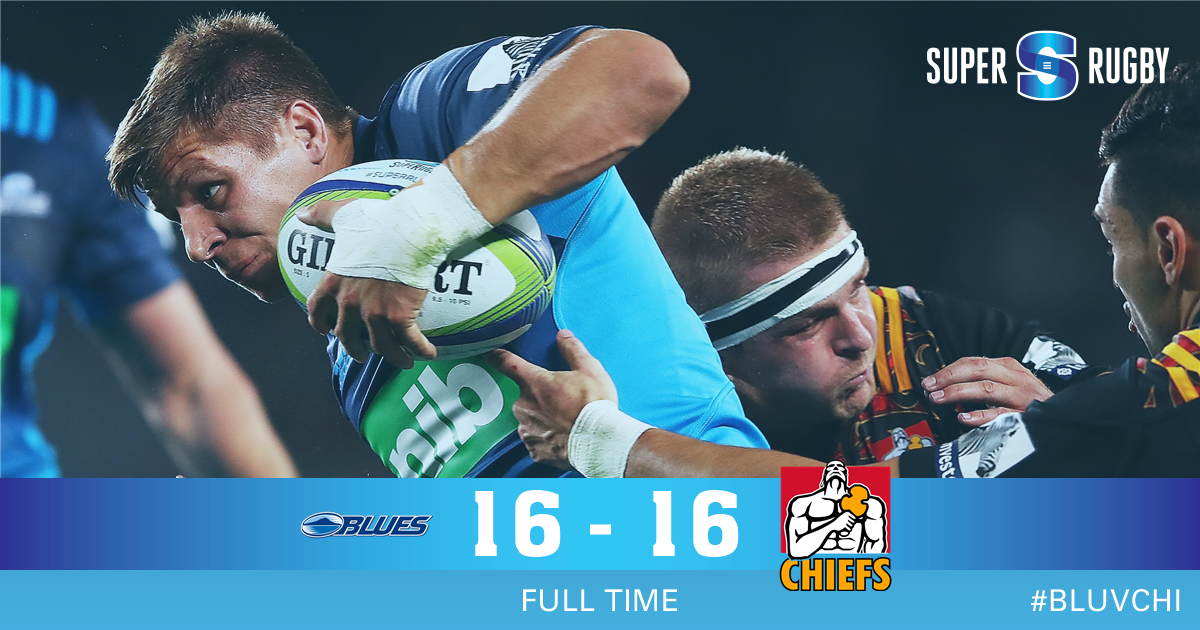