The Cheetahs ended their nine-match losing streak with a 47-7 win over the Sunwolves at Prince Chichibu Memorial Stadium.

The Cheetahs won the game upfront as the athleticism of their forwards proved too much for the Sunwolves.

And the Sunwolves were once again unable to keep up with the tempo of the game, tiring in the last twenty minutes in which the Cheetahs ran in three tries.

The result means the Sunwolves have now conceded an average of over 40 points per game across their last six fixtures, five points per game more than they had conceded in their five games prior.

This is evidence that they are tiring towards the end of the season and this is obviously more noticeable in the last quarter of their matches in recent times.

Meanwhile the Cheetahs will be relieved to have brought that horrific run of form to an end with a polished display in Tokyo.

The visitors dominated the possession stakes in the opening quarter but despite making good headway to the line, they were denied by some good last-ditch defending from the Sunwolves.

They finally got their try after a number of strong carries from the forwards who regularly got over the advantage line as they took the ball through the phases. Cassiem was the final link in the chain as he bashed through several defenders to crash over the line in the 16th minute. Marais converted to give the away side a 7-0 lead.

Jordaan, on the field for Henco Venter at number eight, went over in the corner after persistent Cheetahs pressure.Marais added the extras as the sides went into the break at 14-0.

The Cheetahs then scored a magnificent team try immediately after the resumption of the second-half. The Sunwolves kicked off and Petersen collected the ball. Petersen, Rhaymond Rhule and Clayton Blommetjies were all involved with some beautiful running and offloads as the ball found its way to Marais who capped off a wonderfully crafted move.

The Sunwolves showed character to bounce back. They took the ball through six phases with good tight build-up from their forwards. Captain Wykes profited off a missed tackle to run over unopposed and dot down. Fly-half Yu Tamura added the extras to cut the deficit to 12 at 19-7. 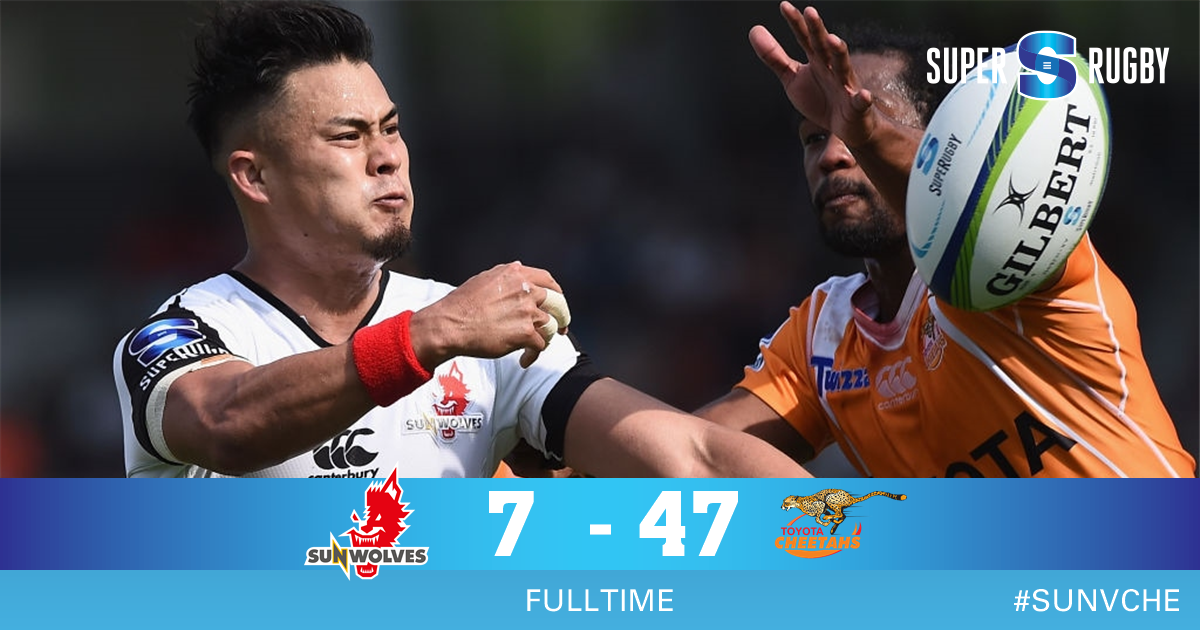 In response the Cheetahs secured a lineout through Oupa Mohoje before taking the ball through seven phases. Once again, it was Cassiem who found himself in space on the right wing to dot down. Marais added the extras to make it 26-7 in the 66th minute.

Just four minutes later, the captain Van Jaarsveld got in on the act. After a superb line break from the industrious Jordaan, he offloaded off the ground and Jordaan burst over as the Sunwolves were powerless to stop a man of that size with that momentum. Marais added two as the Cheetahs made it 33-7.

The Cheetahs then got their sixth try of the match. After a lineout Van Jaarsveld created a break and good work from Cassiem sent Meyer away to score.

After a great scrum for the forwards, it was good work from Blommetjies as he put the ball on the boot. Petersen showed searing pace to collect the ball and dot down. Francois Uys, a loose forward, kicked a great comversion from the touchline as the match ended 47-7.