The Highlanders climbed to third place on the New Zealand conference with a 44-28 win over the Waratahs in Dunedin.

Tries from Richard Buckman, Liam Coltman, Tevita Li, Rob Thompson, Daniel Lienert-Brown and Lima Sopoaga for the Highlanders proved too much for the Waratahs, who scored through Israel Folau, Taqele Naiyaravoro and a brace from Jake Gordon.

The Waratahs were unlucky to have a player harshly sin-binned in Dean Mumm which definitely changed the course of the game. The Aussie side actually produced their best performance of the season and deserved more from the game, only to fall short.

However, it was not to be. And the 'Tahs' chances of catching the Brumbies at the top of the Australian Conference have been dealt another blow.

Marty Banks notched a penalty after 10 minutes as minor consolation for the Highlanders' early dominance. Soon they had more of a tangible reward when Bernard Foley's attempted clearance was charged down by Luke Whitelock and the ball bounced kindly for Buckman who had the essy task of dotting down in the 17th minute. Banks converted to make it 10-0.

But the Waratahs responded almost immediately. Folau did brilliantly to get on the outside of Elliot Dixon, fending him off in the process and cruising over unopposed for the away side's first try. Foley added the extras to cut the deficit to three.

Banks added another three from the tee five minutes before half-time after the Highlanders won a scrum penalty to make it 13-7.

Soon after, Ben Smith knocked on when receiving a Foley penalty under the posts that narrowly missed which meant the Waratahs had a five-metre scrum just to the right of centre.

From the scrum, they executed a wonderful set-piece move as scrum-half Nick Phipps passed back to Foley who immediately pinged the ball out on to the right touchline for wing Naiyaravoro to bash over before dotting down just inside the field of play. Foley's conversion ensured the Waratahs took a 14-13 lead in to the break.

The Waratahs started the second half well but were unlucky to have Mumm yellow-carded for what seemed harshly adjudged to be a dangerous tackle. From the resulting penalty, the Highlanders kicked for touch. They cleverly went for the driving maul, exposing the Tahs' numerical disadvantage, driving them back before Coltman went over at the back of the maul as the home side regained their lead.

However, five minutes later, Malakai Fekitoa produced a pinpoint kick for Li to run on to to dot down in the 50th minute to make the score 23-14 to the Highlanders.

In the last quarter, the away side began to tire and the Highlanders pounced. Thompson, on as a substitute for Li, went over to get his side's fourth try. Sopoaga, on to replace Banks, added the extras to make it 30-14 after 65 minutes. 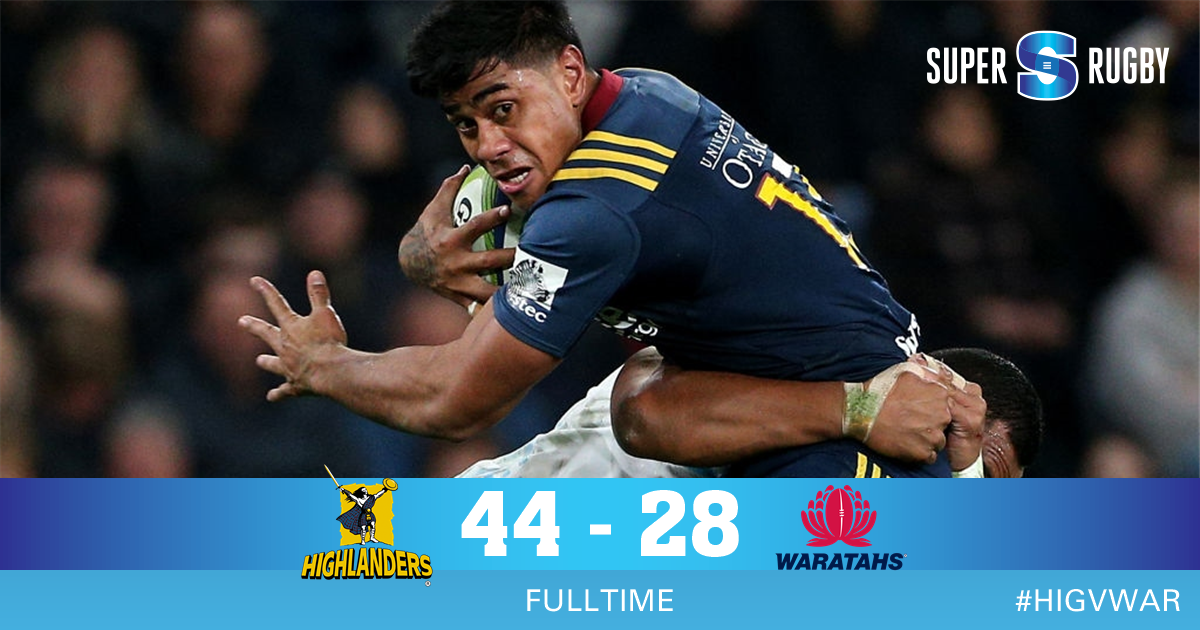 In response, the 'Tahs got one back through Jake Gordon, showing some character with a good team try making it 30-21 with nine minutes to go.

A wonderful break from Sopoaga started the move that led to the Highlanders' fifth try. He offloaded to Ben Smith before Siosuia Halanukonuka burst through and was halted just inches from the line. But Lienert-Brown's pick and go saw him going over the line with ease.

Waisake Naholo was the creator for the sixth try bumping off a defender before setting Sopoaga free to dot down. Sopoaga converted to make it 44-21.

The Tahs' had the last laugh, however, when Gordon dotted down for his second, but it was too little too late.