The Hurricanes continued with their fine recent form when they claimed a 34-20 bonus-point win over the Bulls in Pretoria.

In an entertaining clash, in which both sides gave the ball plenty of air, the defending champions were full value for their victory and eventually outscored the Bulls by five tries to two.

The Hurricanes were in control from the outset led 24-13 at half-time thanks to tries from Jordie Barrett, Ngani Laumape, Wes Goosen and Mark Abbott - of which two were converted by Otere Black - with the Bulls' points registered via a converted Duncan Matthews try and two penalties from Tian Schoeman.

The result means the champions return to second position in the New Zealand Conference standings, although they are 11 points adrift of the Crusaders, while the Bulls are now third on the Africa 1 Conference table, one point behind the Cheetahs who moved above them after beating the Sunwolves earlier on Saturday.

Beauden Barrett was a late withdrawal before kick-off, replaced by Black, but his younger brother, Jordie, grabbed the early impetus when he cut the Bulls up far too easily for a try after around 90 seconds, set up by the 'Tongan Bear' Loni Uhila.

Full credit to the Bulls however for how they hit back, a chip over the top of the defence leading to a one-two between debutant Matthews and Jan Serfontein for an excellent score.

Midway through the half, Ngani Laumpape ran onto a pass from TJ Perenara close to the halfway mark and beat three defenders before scoring his 12th try of the season.

The Bulls repled with two penalties which meant the match was evenly poised with the Hurricanes leading 24-13 by the half-hour mark.

The visitors finished stronger, however, and tries from Goosen and Abbott meant they had a nine-point lead at the interval.

Abbott's try was a fitting reward for the champions' decision to attack as they opted to kick for touch twice - when awarded penalties - after the half-time hooter had sounded already.

The end-to-end action continued after the break although the first points of the half came in the 58th minute courtesy of a Black penalty which gave his side a 14-point lead.

Two minutes later, the Hurricanes extended their lead when Leni Apisai crossed for their second try after gathering a Julian Savea pass deep inside the Bulls' 22.

Black added the extras and with the game in the bag, the champions took their foot off the pedal during the final quarter.

The Bulls continued to give their all and were rewarded in the 75th minute when Nick de Jager scored a consolation try but the Hurricanes did enough to see out the rest of the match and left Pretoria with a richly deserved bonus-point triumph. 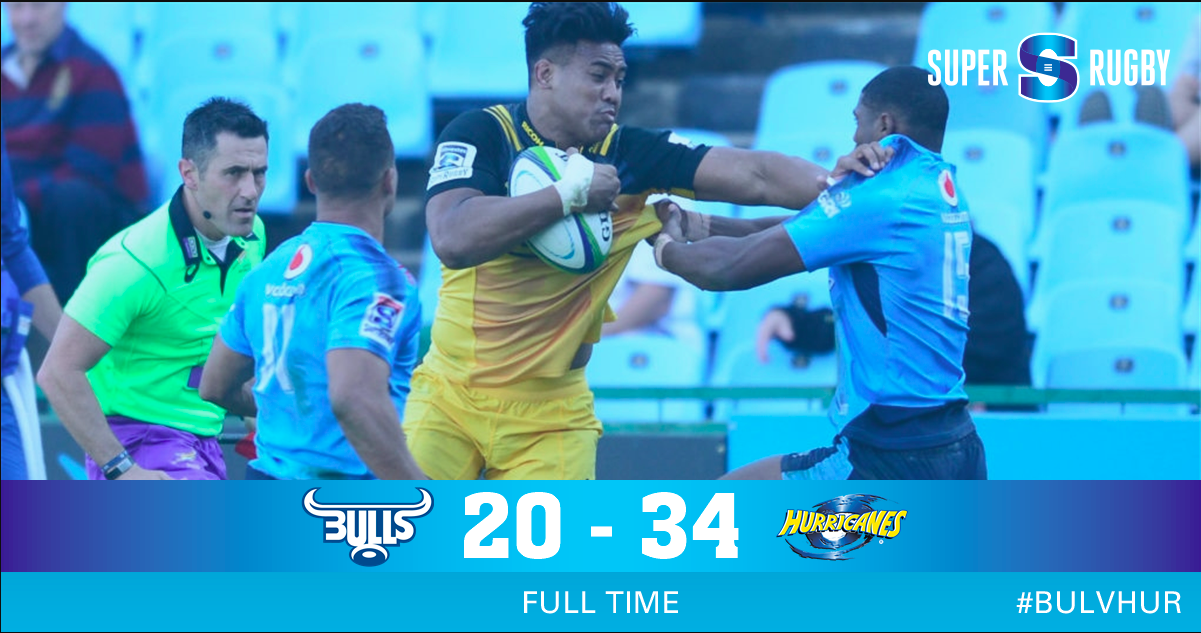