Sharks get the better of Stormers

The Sharks were able to overcome the Stormers 22-10 in a hard-fought South African Super Rugby derby in Durban on Saturday.

The Stormers tried their free flowing, progressing style of play but it was stifled by a strong Sharks defensive line. Both sides conceded several turnovers although the Sharks eventually got the rub of the green and outscored the visitors by two tries to one.

Tries from Johan Deysel and Stephan Lewies along with a penalty and a conversion from Garth April meant the home side held a 15-0 lead at the interval.

It was a quiet first half as both teams battled for supremacy without making much headway. The contest was a physical one and both sides put in big hits  but because of wet conditions it turned out to be a scrappy affair.

The Sharks held the upperhand in the opening exchanges and took a 3-0 lead when April slotted a penalty in the seventh minute after Oli Kebble was penalised for illegal scrummaging.

The home side continued to dominate and extended their lead three minutes later when Johan Deysel gathered a pass from Cobus Reinach before crossing for the opening try from close quarters.

The next 25 minutes was an attritional affair as both sides struggled to gain the ascendancy but this period was characterised by several handling errors from both sides.

The Sharks eventually extended their lead in the 37th minute when Stephan Lewies barged over from close quarters after Reinach did well in the build-up by playing quickly when the Sharks were awarded a penalty on the edge of the Stormers' 22.

April added the extras which meant the Sharks had their tails up with a 15-point lead at half-time.

The Stormers were fastest out of the blocks after the restart and opened their account via an SP Marais penalty in the 46th minute. The visitors continued to dominate and they were rewarded with a try 10 minutes later scored in a similar fashion to Lewies' earlier effort.

Jano Vermaak took a tap penalty inside the Sharks' 22 and after he was stopped just short the tryline, Marais gathered before diving over the whitewash.

Marais dusted himself off and added the extras and with the score at 15-10 to the Sharks, the visitors were back in this game.

Five minutes later, the Sharks increased their lead and they did it in style thanks to an impressive Sbu Nkosi try.

From a lineout just outside the Stormers' 22, the flyer ran onto a flat pass from Reinach before shrugging off a tackle from Ramone Samuels. He still had work to do but outpaced the cover defence before diving over under the posts.

The visitors tried gallantly to fight back in the final quarter but a resilient defensive effort from the Sharks kept them at bay and secured the hosts the victory. 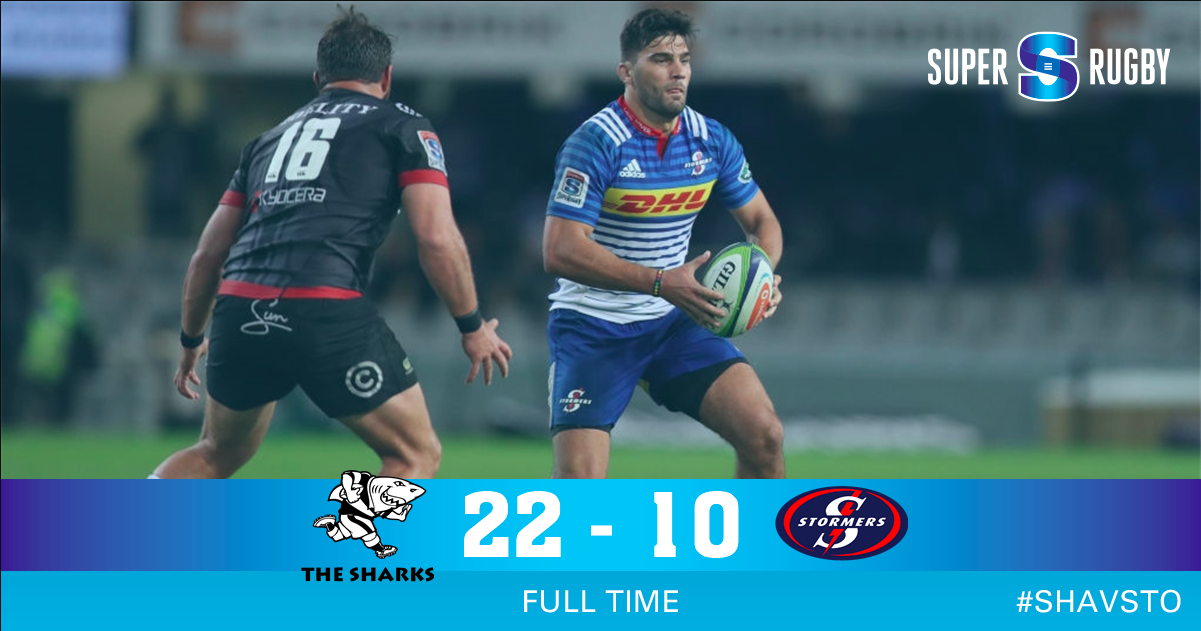